Is charred food bad for you? 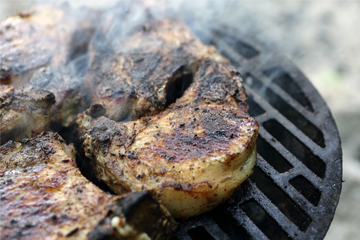 While there's a clear correlation between cancer and charred meat, researchers aren't sure exactly how much is too much to eat.
Radist/ThinkStock

Some people prefer their meat on the rare side, and some love it well-done. Really, really well-done. If you're one of those people — you like your steaks with a nice, thick, charred crust — some well-meaning friend has probably warned you that it could cause cancer. This admonition has some teeth: According to multiple studies, regularly eating very well-done, charred meat can significantly increase your risk of cancer. One study at the University of Minnesota, which tracked the eating habits of more than 62,000 people over nine years, found a greater than 60 percent increase in pancreatic cancer cases among those who ate charred meat on a fairly regular basis [source: Anderson et al.].

There are two main types of carcinogens, or cancer-causing substances, associated with charred meat. The first, heterocyclic amines (HCAs), appear when muscle meat (from beef, pork, fish and poultry) is cooked at high temperatures. In intense heat, the meat's creatine (a substance the body uses to store energy) reacts with amino acids and sugar to form HCAs, which can cause DNA changes that raise the risk of cancer in some people. The second group of char-related carcinogens is polycyclic aromatic hydrocarbons (PAHs). They're formed when dripping fat from meat causes the fire it's cooking on to flare up and smoke.

While there's a clear correlation between cancer and charred meat, researchers aren't sure exactly how much is too much to eat. HCAs and PAHs damage our DNA when they're metabolized by certain enzymes in our bodies. Because people have different enzyme levels and not all bodies process things exactly the same way, there are no cut-and-dried answers. Most of the studies on this issue have been done on rodents that were directly dosed with massive amounts of these carcinogens — in some cases, a thousand times more than a person would likely get from a serving of charred meat — so there's no direct connection to ill effects among meat-eating humans [source: NCI]. This is why there are no guidelines from the U.S. Food and Drug Administration on charred meat, just general advice to eat less of it.

We tend to think "grilling" when burned-to-a-crisp meat comes to mind, but HCAs and PAHs also can be a factor if you're smoking, roasting, broiling or pan-frying. Fortunately, you can take steps to reduce carcinogens. First, adopt the "slow and low" mantra: Cook your meat at a lower temperature and use indirect heat instead of putting your meat directly above the flames. Flip the meat often. Marinades also help, for reasons that are somewhat unclear: Beef can go in a beer or red-wine mixture in the refrigerator for a few hours, and chicken is helped most by an olive oil/lemon juice/garlic combination [source: Valery].

And what about vegetables? Can you still enjoy your zucchini grilled with a delicious coating of black crust? Yes, but there is a small risk of exposure to benzopyrene, another PAH also found in cigarette smoke. While there hasn't been much research about links between cancer and benzopyrenes in charred veggies, they appear to pose less danger than the carcinogens in charred meat. So burn up those veggies — but maybe don't say it was us who gave you the go-ahead.

New Chocolate Breakfast Cereals Claim to Be Healthy. But What Sounds Too Good …
Is there a supplement for heat intolerance?
What are the healthiest types of lettuce?