How can you tell organic foods are pesticide free? 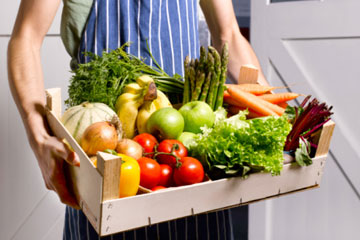 When the U.S. Congress required that, by 2006, the U.S. Environmental Protection Agency (EPA) review the safety of nearly 10,000 agricultural pesticides, the driving force was concern for child safety [source: Schneider]. Not that kids are the only ones exposed, of course, but their tiny bodies leave them more vulnerable than adults to the effects of trace pesticides.

The true nature of those effects is somewhat hazy. The EPA has tested and approved the pesticides and trace levels currently found in foods that are grown, processed and/or sold in the United States. But animal studies show that some of those "safe" pesticides might cause health problems, including brain and developmental damage [source: Schneider]. One study found that a pesticide known to cause cognitive problems in rats, called chlorpyrifos, was present in notable levels in children who consume normal amounts of conventionally grown produce [source: Schneider].

That same study discovered that within 36 hours of switching those children to organic produce, chlorpyrifos was no longer detectable in their bodies.

More and more people are choosing organic food, largely in an attempt to limit exposure to potentially harmful chemicals. Organics are believed to be safer, healthier and better for the environment. They're believed to be grown without pesticides, and consumers are willing to pay extra for the assurance that they and their kids aren't ingesting bad stuff.

Is the assurance warranted? Does "organic" mean "pesticide-free"? How do you know you're really paying for a healthier apple?

In this article, we'll find out about the relationship between organic farming and pesticides. We'll see what's required to be called "organic," what's prohibited and how you can tell if the apple you're buying is really pesticide-free.

And ideally, when you buy an organic apple, it is pesticide-free. 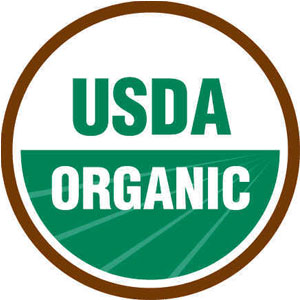 Look for the USDA certification on organic foods.
Photo courtesy of GovGab

The concern over pesticide use in agriculture has been a big part of the huge growth of the organics industry over the last decade. What used to be a specialty item sold in specialty stores to either the rich or the granola crowd is now commonplace. You find organic food in chain grocery stores. You find it with generic labels.

All of this "organic" food should be free of the pesticides most people are worried about: synthetic, chemical pesticides (and herbicides, for that matter). Not all pesticides are prohibited in organic farming, however.

One of the ideals of organics is harmony. Organic farmers use the properties of the land -- naturally occurring, beneficial worms and diatomaceous earth, for example -- to protect against pests that would ruin crops. But sometimes, a little extra help is needed, and pesticides do enter the picture. In this case, though, they're natural pesticides. Acceptable ones include insecticidal bacterium, dried chrysanthemum flowers and Derris plant roots (rotenone).

It's important to note a distinction in labeling, however, when deciding to go synthetics-free. "Organic" is a certification, and it's not the same as "pesticide-free." They embody different standards, and the stricter one is the "organic" designation -- particularly U.S. Department of Agriculture (USDA) organic, although some other certification bodies are reliable, as well. "Pesticide-free" actually means very little. It's not a regulated distinction. Produce labeled "pesticide-free" probably was grown without synthetic pesticides, but there's no federal regulation regarding the use of that particular phrase. "Organic," however, is a well-regulated word. Food labeled "organic" has to be not only free of all synthetic pesticides, but also grown in soil that has been free of synthetic pesticides for a minimum of three years.

There are some issues, though, that make it somewhat difficult to be sure that when you buy organic you're getting the ideal -- and whether the ideal is worth the price. 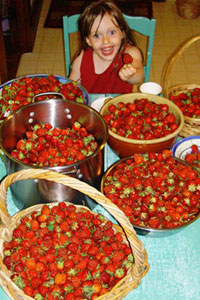 It's hard to ever know if your food is completely free from chemicals.
Photo courtesy of GovGab

Any time you buy an organic apple for, say, 25 percent more than you'd pay for a conventional apple, you're putting your trust in some entity. Maybe it's USDA-certified organic and you're trusting that the U.S. government has rightly approved its organic nature. Maybe it's certified under a state program, or maybe you know the actual farmer who grew the apple under organic conditions.

Regardless, it's a leap of faith, and that's the first problem facing organics: "Organic" is a human designation, and humans aren't always right, or honest, or fully in the know. It's possible the government certifier didn't look closely enough, or the farmer cut corners and planted before the full three years of synthetic-pesticide-free conditions were complete.

That brings us to another issue with organics and pesticides: Sometimes, organic produce is contaminated [source: Groth]. It's seldom the result of dishonesty. It's just the chaos of nature. If an organic farm is situated near a conventional farm, it's possible the wind or rain run-off could carry some of the conventional pesticides into the organic field.

Nonetheless, a consumer can be pretty sure that, at the very least, an organic apple contains less synthetic-pesticide residue than a conventional apple does. And that's worth the extra 50 cents, right?

It all depends on how you look at it. In reality, there are no conclusive studies showing that the amount of pesticide residue humans ingest through produce (or meat raised on that produce) causes bodily harm. At the same time, there's no absolute assurance that just because a crop treatment is natural it's perfectly safe for human consumption.

In the end, the best approach is simply to be smart: Wash all of your produce before you eat it, scrub the stuff that can stand up to it, and trim the fat from meat (that's where pesticides would collect). If you'll be consuming the peel, consider going organic, because the peel is the part that would hold trace pesticides. This is especially true with peaches, apples and peppers [source: DG]. If you won't be eating the skin or outer covering, as with pineapple, mango and sweet corn, it's probably safe to save some cash and go conventional.

For more information on organics, pesticides and related topics, look over the links on the next page.