Should you refrigerate eggs? 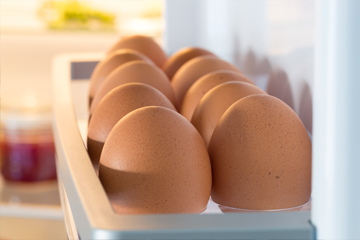 Should you refrigerate your eggs? In egg-bathing countries, the answer is yes.
8vFanI/ThinkStock

If you live in the U.S., Australia or Japan, you might think it's obvious. Of course you should refrigerate eggs! It would be unsafe not to, right? But if you live anywhere else in the world, the question might be puzzling. Why would you refrigerate eggs when they're perfectly fine at room temperature?

Here's where everyone agrees: The Salmonella enteritidis bacterium is extremely dangerous to humans and can infect hens' ovaries and contaminate eggs even before they're laid. Cracked or porous eggs also can become infected during the production process. According to the U.S. Food and Drug Administration, salmonella is the No. 1 cause of food-borne illness in the U.S., causing more than 142,000 illnesses a year [source: FDA].

Because there's no way to tell which eggs have been infected, egg producers have blanket protection policies against salmonella. The U.S., Australia and Japan require eggs to be washed immediately in a hot, soapy bath and then refrigerated for the remainder of their shelf life. Producers and consumers in most other countries don't wash or refrigerate their eggs at all.

On first glance, it might seem that the wash-and-refrigerate contingent has the safety advantage. In reality, the two camps are using two ways to get the same result.

Washing eggs kills bacteria, but it also removes the waxy shell coating that defends eggs against microorganisms. So then the washed eggs have to be constantly refrigerated to make up for their lack of protection. Non-egg-washing countries generally vaccinate their hens to prevent infection, and then the naturally coated eggs don't have to be washed or refrigerated. Neither process has been shown to be safer, which is something of a blessing for poorer countries where refrigeration would be prohibitively expensive for both individual families and farms.

So, should you refrigerate your eggs? It depends on where you are and from whom you've bought them. If the eggs have been refrigerated through the production process, you need to keep them in the fridge. If you live in most areas of the world, put your eggs in the pantry and carry on.