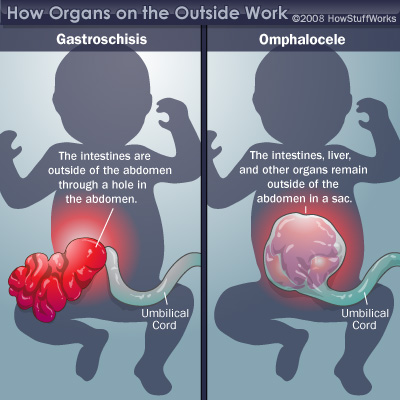 Gastroschisis, meaning "belly cleft" in Greek, usually appears as a 2- to 4-centimeter opening of the abdomen on the right side of the umbilical cord [source: American Pediatric Surgical Association]. Although less severe than an omphalocele, gastroschisis is still a dangerous condition that leads to death in 15 percent of cases [source: Engber]. Gastroschisis is the most frequently occurring problem with the abdominal wall, and 40 percent of babies born with gastroschisis are undersized or born prematurely [source: American Pediatric Surgical Association].

With gastroschisis, nothing is covering the exposed intestine, causing it to come into contact with the amniotic fluid when the fetus is still in the womb. When this happens, a hard film develops around the intestine, which hinders the newborn's intestinal function, sometimes for months.

With such a sensitive part of the body exposed, there's a chance for dangerous complications to occur. One complication, called atresia, occurs in 10 to 15 percent of gastroschisis cases [source: American Pediatric Surgical Association]. With atresia, a portion of the intestine doesn't form at all, perhaps because blood didn't reach that area or because the intestine became twisted and died. Other possible complications include a ruptured intestine, loss of fluid and nutrients, or internal reproductive organs appearing outside the abdomen.

Doctors rely on a prenatal ultrasound to diagnose gastroschisis. Once the baby is born, doctors immediately take action to deal with the birth defect, administering antibiotics to combat infection. The baby may also be put in a sterile bowel bag that rises up to the chest and provides insulation from dangerous infections. If the abdomen is large enough to receive the protruding organs -- and in many cases it's not -- the opening may be surgically closed after birth.

In many cases, the abdomen is too small, so a device called a preformed silo is used to gradually soften the intestines and ease them back into the abdomen. Then, when the baby is a couple of weeks old, doctors perform surgery to seal the hole [source: American Pediatric Surgical Association. Barring further complications, the baby has a good chance for recovery.

Now let's take a look at a more severe birth defect involving organs on the outside of the body.