Why don't women have Adam's apples? 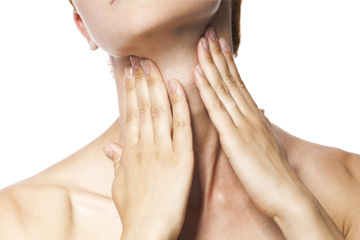 Men don't have a unique feature in their throats, it's just that the larynx is more prominent than in women.
Denis Kartavenko/Getty Images

The question "Why don't women have Adam's apples?" is easily answered. Some women do. But a trickier question is why we often can't see them.

If you're unfamiliar with the term, an Adam's apple is the lump you can sometimes see in the middle of a man's throat. It gets its name from the biblical story of the Garden of Eden. According to legend, Adam got a piece of the forbidden fruit stuck in his throat, and all men following have evidence of that event in the form of an Adam's apple [source: KidsHealth].

That's folklore. But in reality, the Adam's apple is a result of a boy's voice box (larynx) growing. The noticeable bump of cartilage starts to become evident during puberty, when the voice box gets bigger. This enlargement is what causes the voice to deepen.

Girls' larynxes grow, too, often just not as much. As a result, teenage girls and women tend to have higher voices than their male counterparts, and they usually don't have Adam's apples. However, some women do have visible ones.

The appearance of an Adam's apple (or what looks like one) in a woman could be due to any number of reasons. Sometimes, it's an anatomical anomaly, genetic trait or the result of a hormonal imbalance that occurred during puberty. In other instances, a woman's Adam's apple may not be an Adam's apple at all – it could be an unrelated growth caused by a health condition.

Sadly, because the Adam's apple is so frequently identified as a male feature, some girls or women with them may deal with issues that affect their self-confidence and sense of femininity. If necessary, counseling can be helpful in assisting a woman in gaining perspective and self-assurance.

People also may choose to have surgery to reduce the size of the Adam's apple. While the procedure is relatively safe, all surgeries come with risks, including death. An Adam's apple surgery may result in visible scarring and potential changes in voice. In addition, Adam's apple surgery is considered cosmetic and is unlikely to be covered by insurance [source: Columbia Health].

Are there other things about the body you've always wondered about? Keep reading for lots more information.

Does Oxytocin Make Us Fall in Love?
What's the Difference Between the Fibula and Tibia?
Sugars in Human Breast Milk Act as Antibacterial Agents