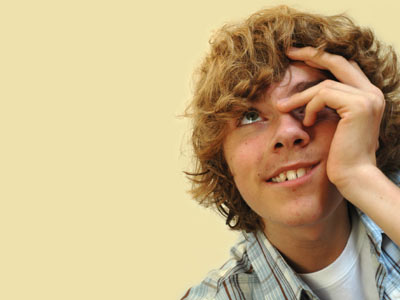 Growing up from a boy to a man is no easy task.
©iStockphoto.com/junial

Adolescence is more than just a time in your life when you have incredibly awkward conversations with your nervous parents. It's also the time when both your body and your mind change, making you stronger, taller, hairier and able to reproduce, as well as more perceptive and philosophical. This period of transition between childhood and adulthood is called puberty, and it's the process of growth and sexual maturation that, for males, occurs generally between the ages of 9 and 18.

It is no small feat. The ability of the body to suddenly "come alive" and simultaneously advance on several different fronts is nothing short of amazing. Bones that have already been growing at a remarkable rate reveal that they've just been warming up for the real show. Glands that have been for the most part dormant now produce hormo­nes that order different parts of the body to swing into action. The mind that has for years been concerned with such things as how to catch a bullfrog or build a better kite now finds it has the capacity to probe life for meaning, to seek out and maintain romantic relationships, and to plot and plan a path in life.

­Of course, change comes at a price for young men: bones hurt, faces erupt in acne, fear and anxiety arrive with newfound sexuality and expectations. Voices change, depression may rear its head and there often seem to be more questions than answers. Some boys start puberty early, while others don't experience it until later, and it progresses at different rates for everyone. This difference in growth can cause embarrassment, anxiety and bullying, and even all three at once if you start getting an erection while being stuffed into a locker by a bigger boy.

In this article, we'll do our best to answer some of the questions about puberty and how it affects males. We'll look at its various stages, we'll learn when changes happen and how they happen, and what young men -- and their loved ones -- can expect out of this turbulent period of life.