Why do men smell different from women? 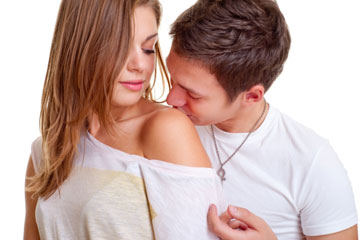 Soaps, perfumes, lotions and even what we eat can make us each smell unique, but when it comes to our natural scent, there's something more than toiletries and garlic that makes men and women smell different from each other. It's in our genes, a biological predisposition, although the last time you washed your jeans is sure to contribute a little, too. Let's look at two current theories to understand how our genes help determine how gender influences our smell.

First, we smell because we sweat. It's not the sweat that smells; the bacteria on our skin that breaks down our sweat causes body odor. In a recent study, researchers in Switzerland found that samples taken from female armpits had different, higher, levels of a sulfur-containing compound than levels found in the sweat samples taken from male armpits: 5 milligrams in female sweat compared to 0.5 milligrams in male sweat [source: Troccaz]. The makeup of male and female sweat differs in the concentration of sulfur, and the more sulfur we have in our sweat, the stronger our body odor can be. But at least we aren't walking around smelling like rotten eggs. This study also found that women's body odor smells similar to onions or grapefruit while men smell more like stinky cheese.

In addition to the sulfur content of our sweat, other studies show that women are attracted to men who are the most unlike them genetically, and they get that information through the way men smell. No noses in cheese-smelling armpits here -- participants in such studies are typically asked to forgo their normal hygiene practices -- no antiperspirants/deodorants, and all other products were unscented -- for a few days before researchers evaluate their sweat samples for odor. Participants usually wear cotton sweat pads in their armpits or sleep in cotton T-shirts to make smelling samples easier. And researchers then ask participants of the opposite sex to smell the results. What kind of information can be had from smelling a T-shirt? Our body odor holds subtle clues, and they can't be masked even with fragrances.

A group of about 100 genes known as the major histocompatibility complex (MHC) is responsible for controlling our immune system. These genes help our body recognize itself versus things that are foreign to it. They recognize infectious diseases such as HIV and are behind tissue rejection in transplant recipients. They also seem to play a role in how we choose our mates.

Both men and women who participated in these body odor studies preferred the scents from the opposite sex who had MHC genes that are most dissimilar from their own -- and this was most true for women who were ovulating [source: Wedekind]. Why is this important? It could indicate that humans are able to sniff out mates who will produce the fittest offspring. It also may indicate that we are able to smell relatives, avoiding inbreeding (which produces genetically inferior offspring).

So, in addition to men and women having different concentrations of sulfur in their sweat, men also smell different from women because the smell of each gender's sweat plays a role in mate selection. This different smell is how our noses recognize the opposite sex, and more importantly, those members of the opposite sex with whom we can produce genetically strong children.

Check out the next page for lots more information about men and women's smells.

What is anhidrosis?
Do underarm sweat pads work?
Which works best: roll-on, stick or spray deodorant?