How and why does the heart pump blood to itself?

Browse the article How and why does the heart pump blood to itself? 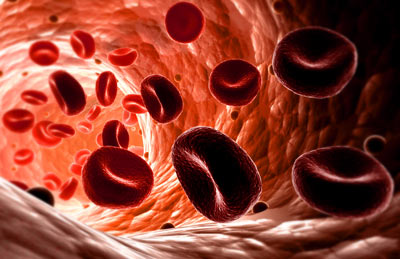 These red blood cells may be bound for the coronary arteries if the heart has anything to say about it. See more heart pictures.
3D4Medical.com/Getty Images

Your heart works nonstop to deliver nutrient-rich blood to every part of the body, but its first priority is always to take car­e of No. 1 -- itself. You can think of it like this: When you deposit money into a checking account, you establish a system where all of your money passes from you to your bank and then follows one of two paths. It may either earn interest while the bank loans it out, or it may scatter to pay your various expenses. Before that money scatters, the bank earmarks some of those funds for itself first. When you look at your statement, you can see all of the deductions from your account, and there at the top is the monthly checking account fee.

Your heart handles blood in much the same way. The heart pumps about 2,000 gallons (7,571 liters) of blood a day through its chambers. Of ­course, we're not big enough to hold that much liquid, so it just pumps the same blood over and over, and it doesn't benefit from a drop of it. At least, not initially. That's a bum deal for an organ that beats about 100,000 times daily to supply every cell in the body with freshly oxygenated blood.

Y­our heart receives oxygenated blood in the same way your brain, foot and the rest of your body do: through an artery. But it's not entirely the selfless organ that greeting-card companies make it out to be. No matter how many tissues and organs are anxiously awaiting more oxygen-rich blood, the heart takes the very first cut of the good stuff arriving from the lungs, just as the bank makes sure its fees are paid first.

How does the heart get first dibs? Imagine you're driving out of the city on an outward-bound freeway. Suddenly you exit, cross the overpass and double back to get on the inward-bound freeway. The blood pumped to the heart executes a similar maneuver. Oxygenated blood courses through the left side of your heart, riding out through the aorta, one of the muscle's main outward-bound pipelines. Then it quickly exits this cardio freeway, crosses the overpass and shoots back to the heart inside one of the coronary arteries.

We'll talk more about the logistics of that oxygen delivery next.

Blood Flow Through the Heart 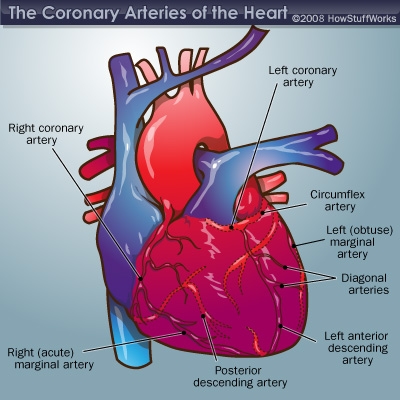 These are the arteries responsible for supplying your heart with blood.
HowStuffWorks

Why doesn't the heart act like an opportunist and just take its oxygen straight from the blood that's constantly passing through its chambers? There are two important reasons. First, not all of the blood in the heart has oxygen. Remember, your heart is divided into four chambers: the left atrium and left ventricle, as well as the right atrium and right ventricle. The left side is receiving "good," oxygen-rich blood from your lungs, sending it through the left atrium down into the left ventricle, where the heart's contraction forces it through a valve into the aorta.

The left side of the heart would be OK if it took its oxygen right there in the chambers, but the right side would be out of luck. The right atrium handles "bad," oxygen-poor blood from all over the body and ships it down into the right ventricle. From there, the heart's contraction forces this bad blood out into the pulmonary artery, which forwards it to the lungs. This blood gains oxygen again, but it still returns to the side of the heart dealing in good blood -- the left side. The right side never sees oxygenated blood pass through it, so it needs its own supply.

The second reason for this tricky route is that the rest of the body wants fully oxygenated red blood cells, not just castoffs from the heart. If the heart replenished its own oxygen supply directly from the river of blood flowing through it, the blood leaving the heart would have less oxygen to deliver to the body. Instead, the muscle exercises some restraint and feeds itself through arteries that tap into the aorta, just like every other part of the body.

Regardless of these differences, the result is the same: The arteries branch off into smaller arteries, and all the arteries and their branches wrap around the heart, like a crown (hence, the "coronary"). This way, all the heart's tissue receives a fresh blood supply, giving it the fuel it needs to pump day after day.

Next, we'll look at what happens when those coronary arteries don't deliver all the fuel that the heart needs. It's not good. 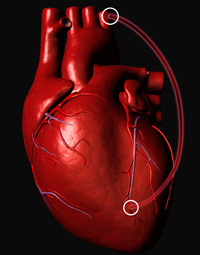 Pictured is a digital representation of what your heart might look like after bypass surgery. This surgery is bypassing a coronary artery.
3D Clinic/Getty Images

Your heart receives its blood from the coronary arteries. These arteries begin life big, soft and smooth inside. As we grow older, we damage those once-supple arteries with stress, fast food, not enough exercise and age. Over decades, they collect plaque (or fatty deposits) along their inner walls, causing them to harden and narrow. This condition is known as atherosclerosis. Unchecked, atherosclerosis may worsen and become coronary artery disease (also known as coronary heart disease). Doctors tend to shorten it to just CAD or CHD.

As CAD advances, a number of things can happen. For example, if a portion of your heart muscle is receiving some -- but not enough -- oxygen due to partially blocked arteries, it won't be permanently damaged, but the muscle won't like the situation one bit. It files a formal complaint with you in the form of chest pain called angina. Stable angina is the lesser of two evils; it's predictable and reversible. Unstable angina, however, could signal an unstable plaque that could cause a heart attack.

You may not feel this chest pain when you're relaxing because your heart doesn't require much blood when you're sunning yourself by the pool. If you start swimming laps, however, it needs more than your narrowed arteries can deliver, and this hurts.

Blockages lower the amount of oxygen getting to the heart muscle. If one of these obstacles breaks open, a clot forms at the site of the rupture in the plaque. This little clot can totally block the artery within minutes. When heart tissue is cut off from oxygen, it quickly begins to die. This, typically, is your heart attack (or myocardial infarction).

If your coronary arteries become dangerously blocked, doctors may discuss one of the following procedures with you.

Angioplasty: This procedure uses a tiny balloon to open a clogged artery. A balloon catheter is inserted into an incision near the groin and threaded up through an artery into the heart. Then doctors inject dye and search for blockages. Once found, they put the catheter through the blockage narrowing and inflate the balloon. This procedure won't stop the arteries from hardening again, but it will lessen the pain and other symptoms of CAD by increasing the blood flow.

Stenting: Sometimes, in addition to or instead of angioplasty, a metal or plastic tube called a stent may be inserted into a blocked artery to prop it open. Doctors may perform angioplasty and stenting on a patient before, after or during a heart attack. Some cardiologists prefer just stenting without angioplasty. The drawback of this procedure is that stents can clog, just like your arteries.

Coronary artery bypass graft (CABG): During a "traditional" CABG, your heart is stopped, and you're placed on artificial respiration. A vein or artery that won't be missed too much is taken from somewhere else, possibly your arm or leg. Surgeons attach one end of the graft to the aorta and the other end to the troubled artery on the far side of the blockage. This detour enables blood to bypass the blockage and flow unobstructed from the aorta to the heart. Most grafts continue working properly for 10 or 15 years [source: Medline Plus]. When you hear the terms double-, triple- or even quadruple-bypass surgery, it refers to the number of arteries receiving bypass grafts.

The main thing your heart needs is the same thing it distributes to the rest of your body: oxygen-rich blood. By living a heart-healthy lifestyle, your heart should get the natural resources it needs to do what it does best, without the help of balloons, tubes or relocated veins or arteries. See the next page for lots more information about the heart.