What causes the sound of a heartbeat? 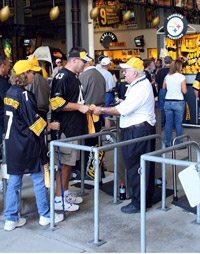 Your heart valves work a lot like the turnstiles pictured here (minus the sports gear).
­Getty Images

Everyone knows what makes a heart beat -- cute cashiers at the grocery ­store. But what is responsible for its distinctive sound? You know the one: lub-dub, lub-dub, lub-dub. Most of us think it's the sound of our heart beating or contracting, but it's not. What we're hearing is the sound of two pairs of valves closing inside the chambers of our heart. Like turnstiles, these valves allow blood to move in one direction through the heart and keep it from backing up down a one-way street.

Can't quite picture it? Imagine you're going to a concert and two lines snake around the arena: one for lucky people who snagged floor-seat tickets and another line for ticket-holders headed to the nosebleeds. Each line has two sets of turnstiles. The first turnstiles that each line passes through rotate at the same time, controlling the flow of concertgoers into the venue. When these turnstiles rotate, they make a noise -- lub.

Now the two people in separate lines shuffle forward a few steps to the next turnstile to pass through security. As these would-be rockers cross through this second set, the turnstiles rotate in sync and make a different noise -- dub.

All night long, people in both lines simultaneously pass through these two sets of turnstiles -- lub-dub, lub-dub, lub-dub. If anyone goes through one and tries to go back, no luck. They only allow forward movement.

This scenario, minus the expensive nosebleed seats and the $50 concert T-shirt, is similar to how the valves in your heart work. Regardless of whether a red blood cell is holding a ticket for the lungs or a ticket for the arteries leading to the rest of the body, it will have to pass through two different chambers and two different valves as it's propelled out of the heart and on to its destination.

Wi­th that much activity, it's amazing that the sound of your heart doesn't keep you up at night. But no, when we get back from the concert, remove our earplugs and collapse in bed, all we faintly hear is the sound of those four turnstiles -- the valves -- moving two at time. Lub-dub. Lub-dub. Lub-dub.

In the next section, we'll learn more about how these valves keep a mob from forming inside your heart.

The inner workings of your ticker

From childhood on, your heart remains similar in size to your balled-up fist. Inside of it, there are four different chambers: two atria stacked on top of two ventricles. Each atrium is paired with a ventricle, and a wall separates them into two different shafts. On both the left side and the right side of the heart, blood enters the upper atrium, files through a valve into the ventricle and then exits through another valve on the way out of the heart.

­When the heart beats, an electrical signal passes from the top of the heart, near the atria, down through the ventricles, and the chambers contract in that order. So when the upper atria contract, the atrioventricular valves sandwiched between the atria and the ventricles open, and the blood in each atrium flows through its respective valve down into a ventricle.

­These valves direct blood from either ventricle to its next destination. Oxygen-depleted blood in the right ventricle leaves the heart through the pulmonary valve that connects to the pulmonary artery leading to the lungs. Oxygen-rich blood in the left ventricle, meanwhile, departs through the aortic valve that connects the heart to the aorta, the body's major expressway for the delivery of freshly oxygenated blood. Once the passing electrical current contracts the ventricles, the blood inside them is forced through the open semilunar valves, which then slam shut. This is the second half of your heartbeat -- "Dub!"

Now, we'll look at the valves themselves a little closer. If you can picture a tambourine, you're halfway there. The frame of the tambourine represents the annulus, or the tough ring of tissue to which the valve's flaps are attached. Now imagine punching through the top of a tambourine and it splitting into three equal-sized pieces across the opening. These pieces represent the valve's flaps or cusps. All of the valves have three cusps, except the mitral valve, which has two, but operates the same as the others.

It is the sound of these cusps coming back together to form a temporary seal that makes the sound we recognize as a heartbeat. But what makes a lub-dub become a lub-dub-whoosh? Find out next.

Heart Murmurs: Marching to the Beat of a Different Lub-Dub 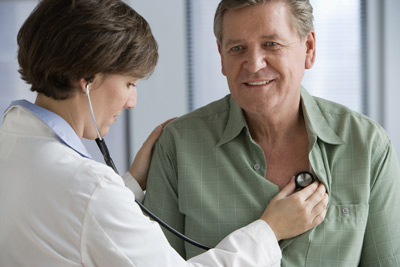 What is this doctor hearing as she listens to this man's heart? Lub-dub? Lub-dub-whoosh? Or is it some unique variation?
Jose Luis Pelaez/Getty Images

While an abnormal rhythm might result from heart disease or a malfunctioning in the heart's electrical system, little hisses, whooshes and other odd noises are usually the result of faulty valves in the heart. These abnormal sounds are called heart murmurs, and doctors detect them using a stethoscope or an echocardiogram.

Heart murmurs are common. About half of all kids have hearts that thump to a different beat [source: University of Chicago]. Fortunately, most of these childhood murmurs are known as "innocent murmurs," meaning they're harmless and don't require medical attention. Many innocent murmurs disappear on their own by adulthood.

Murmurs can, however, signify a serious problem. There are two main types of troublesome valves -- valves that don't seal and allow some blood to move backward (known as regurgitation), and valves that don't open wide enough to let the right amount of blood move forward (stenosis). When either scenario is present, the heart must work harder to do its job.

Luckily, doctors can fix valves. For example, when a valve isn't opening fully, surgeons insert a catheter with a tiny balloon into a vein in the body and push it through until it reaches the constricted or stenotic valve inside the heart. Then they inflate the balloon, knocking the valve's flaps fully apart. This normally solves the problem, allowing the proper amount of blood to pass through the repaired valve. This simple procedure doesn't usually require a hospital stay. Surgeons can also patch holes, remove calcium buildup, or reshape the valve or cusps as needed in more complex procedures.

Sometimes valves can't be fixed, and you need a new one. When doctors give you a new one, they look to machine, man or pig for your replacement.

Mechanical valves are plastic or metal and precisely mimic a human valve. They attach to the surrounding tissue exactly like the natural valve they replace, and they last as long as you last. One major drawback is that mechanical valves are prone to attracting clots, so recipients have to take blood thinners daily for the rest of their lives. If a clot does form, the mechanical valve may need to be swapped out.

Besides mechanical valves, a biological valve may be transplanted. These biological valves may come from either a human or an animal, often a pig. Transplanted human valves get along famously in their new environment, which looks a lot like their old neighborhood. The biggest problem? They're hard to come by, because nobody wants to (or is able to) surrender a perfectly good valve before they give up the ghost.

Animal valves have an advantage over mechanical valves, because the recipient only needs to take blood thinners daily for a few months and can then stop. The downside to having a strange piece of pig wedged into your heart is that biological valves wear away after 10 or 15 years and need to be replaced again.

Now we know more about the heart's turnstiles. Some turnstiles may need a little extra attention, but the important thing is that the show goes on and that customers continue pouring through the gates. See the next section for lots more information about the human heart.

Do You Turn the Door Key and Have to Pee? It May Be All in Your Brain
Aphantasia: When Your Mind's Eye Is Blank
Can holding in a sneeze kill you?