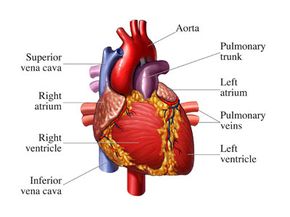 Ever­yone knows that the heart is a vital organ. We cannot live without our heart. However, when you get right down to it, the heart is just a pump. A complex and important one, yes, but still just a pump. As with all other pumps it can become clogged, break down and need repair. This is why it is critical that we know how the heart works. With a little knowledge about your heart and what is good or bad for it, you can significantly reduce your risk for heart disease.

Heart disease is the leading cause of death in the United States. Almost 2,000 Americans die of heart disease each day. That is one death every 44 seconds. The good news is that the death rate from heart disease has been steadily decreasing. Unfortunately, heart disease still causes sudden death and many people die before even reaching the hospital.

The heart holds a special place in our collective psyche as well. Of course the heart is synonymous with love. It has many other associations, too. Here are just a few examples:

Certainly no other bodily organ elicits this kind of response. When was the last time you had a heavy pancreas?

In this article, we will look at this important organ so that you can understand exactly what makes your heart tick. 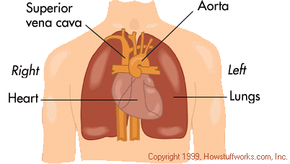 The heart is a hollow, cone-shaped muscle located between the lungs and behind the sternum (breastbone). Two-thirds of the heart is located to the left of the midline of the body and 1/3 is to the right (see Figure 1).

The heart has three layers. The smooth, inside lining of the heart is called the endocardium. The middle layer of heart muscle is called the myocardium. It is surrounded by a fluid filled sac call the pericardium.

When someone listens to your heart with a stethoscope the sound is often described as lub-dub lub-dub. The first heart sound (lub) is caused by the acceleration and deceleration of blood and a vibration of the heart at the time of the closure of the tricuspid and mitral valves. The second heart sound (dub) is caused by the same acceleration and deceleration of blood and vibrations at the time of closure of the pulmonic and aortic valves. 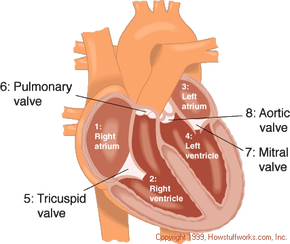 The heart is divided into four chambers: (see Figure 2)

When the heart muscle contracts or beats (called systole), it pumps blood out of the heart. The heart contracts in two stages. In the first stage, the right and left atria contract at the same time, pumping blood to the right and left ventricles. Then the ventricles contract together to propel blood out of the heart. Then the heart muscle relaxes (called diastole) before the next heartbeat. This allows blood to fill up the heart again.

Everyone's pulse (average heart rate per minute) changes as we age. Here is a list of average pulse rates at different ages: 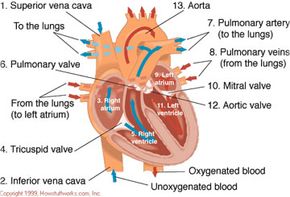 Why does it happen this way? Because blood returning from the body is relatively poor in oxygen. It needs to be full of oxygen before being returned to the body. So the right side of the heart pumps blood to the lungs first to pick up oxygen before going to the left side of the heart where it is returned to the body full of oxygen.

­ Blood now returns to the heart from the lungs by way of the pulmonary veins (8) and goes into the left atrium (LA) (9). When the LA contracts, blood travels through the mitral valve (10) and into the left ventricle (LV) (11). The LV is a very important chamber that pumps blood through the aortic valve (12) and into the aorta (13). The aorta is the main artery of the body. It receives all the blood that the heart has pumped out and distributes it to the rest of the body. The LV has a thicker muscle than any other heart chamber because it must pump blood to the rest of the body against much higher pressure in the general circulation (blood pressure).

Here is a recap of what we just discussed. Blood from the body flows:

The blood picks up oxygen in the lungs, and then flows from the lungs:

Heartbeat, It's a Love Beat

The average heartbeat is 72 times per minute. In the course of one day it beats over 100,000 times. In one year the heart beats almost 38 million times, and by the time you are 70 years old, on average, it's made it to 2.5 billion beats.­ 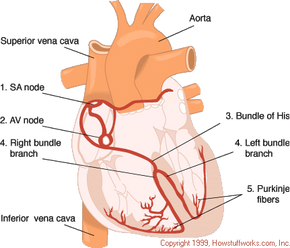 Have you ever wondered what makes your heart beat? How does it do it automatically, every second of every minute of every hour of every day?

The answer lies in a special group of cells that have the ability to generate electrical activity on their own. These cells separate charged particles. Then they spontaneously leak certain charged particles into the cells. This produces electrical impuses in the pacemaker cells which spread over the heart, causing it to contract. These cells do this more than once per second to produce a normal heart beat of 72 beats per minute.

The natural pacemaker of the heart is called the sinoatrial node (SA node). It is located in the right atrium. The heart also contains specialized fibers that conduct the electrical impulse from the pacemaker (SA node) to the rest of the heart (see Figure 4).

All this activity produces electrical waves we can measure. The measurement is typically represented as a graph called an electrocardiogram (EKG). Here is an example of three heartbeats from an EKG (Figure 5):

Each part of the tracing has a lettered name:

Electrical system abnormalities can range from minor premature beats (skipped beats) that do not require treatment, to slow or irregular beats that require an artificial pacemaker. 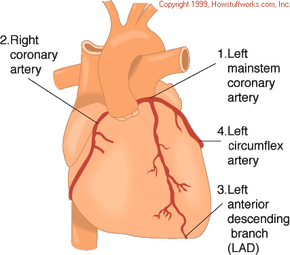 The heart, just like any other organ, requires blood to supply it with oxygen and other nutrients so that it can do its work. The heart does not extract oxygen and other nutrients from the blood flowing inside it -- it gets its blood from coronary arteries that eventually carry blood within the heart muscle. Approximately 4 percent to 5 percent of the blood output of the heart goes to the coronary arteries (7 ½ ounces/minute or 225 ml/min).

For more information on the human heart and related topics, check out the links on the next page.

States of the Heart

Special Offer on Antivirus Software From HowStuffWorks and TotalAV Security 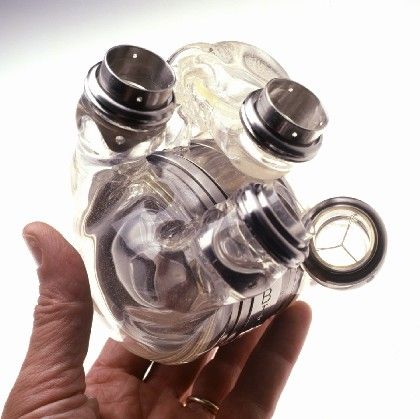 Up Next
How Artificial Hearts Work
Explore More 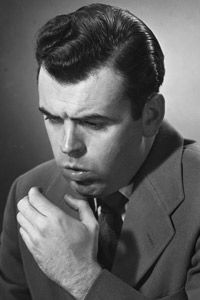 You May Like
Can air pollution affect heart health?
Explore More 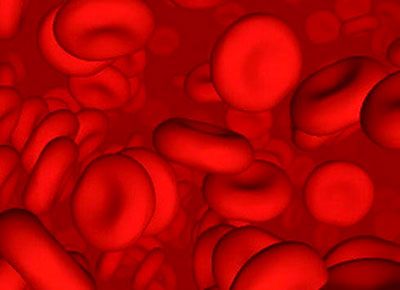