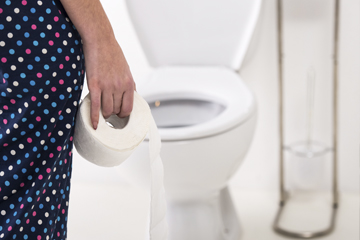 Although it may seem unusual to many, squatting is probably the best way to poop.
vadimguzhva/ThinkStock

The 20th century was known for many advances, but few were as far-reaching as the forerunner of the modern toilet. Although several incarnations of toilet and flushing mechanisms had dotted previous eras, the 20th century became the crapper's gilded age, introducing flushable valves, integrated water tanks and the convenience of toilet-paper rolls [source: Suddath].

Yet we're still struggling to poop. More precisely, we're struggling to poop properly. There's an emerging school of thought that claims our traditional way of defecating -- sitting on a toilet with our knees at a 90-degree angle -- is leading to increased instances of constipation and hemorrhoids.

About half of all adults have experienced the itching and burning sensations of hemorrhoids, which are swollen veins in the anus and lower rectum. The condition can be brought on by several things, including poor diet, constipation, pregnancy and obesity. But straining during bowel movements -- something that happens when people are constipated -- also causes hemorrhoids. Turns out constipation can lead to not only hemorrhoids, but also other scary maladies, like a build-up of toxins in the body [source: Mayo Clinic].

So can changing your pooping position make a difference? According to a study published in Digestive Diseases and Sciences, it just might. The study's participants pooped in one of three positions: sitting on a toilet at a standard 16 inches (41 centimeters) high, a toilet 12 inches (31 centimeters) high or squatting over a container. The subjects were asked to record their efforts, including how long it took to poop and how much effort it took to successfully poop. The several dozen participants revealed some intriguing results. The squatting poopers got the job done faster, going in 51 seconds compared to 130 seconds for their high-seated counterparts. What's more, those who pooped in a squatting position rated their experiences as easier [source: Sikirov].

The idea is that when we squat to poop, the colon releases its pressure on the puborecatlis muscle. In turn, this muscle fully relaxes and the colon straightens, which makes it easier and faster to evacuate its contents from the body. The result could be a more thorough elimination of feces.

It may seem like a strange concept in the U.S., but squatting to poop is commonplace in other parts of the world. As many as 1.2 billion people don't have access to any sort of toilet, while people in many parts of Asia, for example, avail themselves of toilets designed exclusively for squatting [source: WHO].