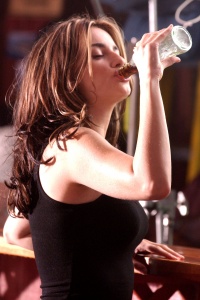 Even celebrities like Penelope Cruz have to burp after drinking soda.
Steve Granitz/WireImage/Getty Images

The human body is a gas-producing machine. Due to both the intake of gases (like oxygen) and the creation of gases during digestion, the average person passes gas — either in the form of a burp or a fart — between 13 and 21 times a day [source: Medline Plus]. But this number can increase quite a bit when people consume certain foods and beverages.

Some things give almost everyone gas. (If you don't believe us, just try to drink a soda and not let out several belches.) And then there are others that only affect certain people. For instance, people who are lactose intolerant may pass a lot of gas after eating dairy.

First, let's look at why the usual offenders cause trouble. Knowing that gas can be both consumed and produced by the body, we can see why some foods and beverages cause more turbulence than others. For example, carbonated beverages contain bubbles of carbon dioxide — a gas. So consuming a lot of soda floods the digestive tract with more gas than usual.

On the other hand, some foods don't create extra gas until they're digested. Beans are a classic example. Because they — and other high-fiber foods — take longer to process, they expel more gas while they're being digested. In addition to legumes, other troublemakers can include many fruits, vegetables and carbohydrates. Proteins usually break down faster and therefore create less gas.

Length or difficulty of digestion also factors into why some people have issues with gas that others don't. Any food your body is sensitive to or has trouble processing (we used the example of dairy earlier) can lead to greater amounts of gas.

So, when it's all said and done, you're going to produce gas no matter what. Accept it as a fact of life. If, however, you'd like to avoid burping and farting excessively, you just have to adjust your diet. In doing so, remember that it's not wise to eliminate healthy foods like vegetables from meals. So, as an option, you might consider taking a gas-reducing supplement when you consume high-fiber foods. They work by introducing enzymes into the digestive tract that help process complex carbohydrates more efficiently.