When It Comes to Q-Tips, We Do the One Thing We're Not Supposed to. Why?

It's no secret that cotton swabs don't belong stuffed into ear canals. The American Academy of Otolaryngology warns against it, and so do medical professionals. And even the makers of Q-tips and other similar cotton buds make it pretty darn clear, urging users right there on the packaging to "not insert swab into ear canal."

"Q-tips are not helpful to clean out the wax in the ear canal," says Tsippora Shainhouse, M.D., a clinical instructor at the University of Southern California, "because they usually end up shoving the wax deeper into the lower parts of the outer ear canal, which don't normally produce or contain ear wax. This wax can also be pushed up against the eardrum, the dividing barrier into the inner ear. It can affect hearing. Moreover, pushing just a little too much can pierce the eardrum, increasing chances of developing acute and chronic ear infections, which can lead to scarring and permanent hearing loss."

The cerumen in our ears, which we commonly call "earwax," is actually a self-cleaning substance that "pushes itself out, together with dead skin cells, dust and skin bacteria," Shainhouse says.

In addition, earwax imbues protective properties on the ear canal and acts as a barrier against damage to the skin from debris or infection. If there's enough of a cerumen build-up to cause pain or hearing loss, that's when you go to a medical professional, who may, for example, flush the canal with saline. Don't go the DIY route.

The one thing you should never do? Insert a cotton-tipped swab into the ear canal. Yet many of of us do exactly that — and on a regular basis.

Cotton swabs are recommended for use cleaning the exterior area of ears, but never for the interior canal.
BSIP/Getty Images

When cotton swabs were invented in 1923, they were primarily marketed for baby care. Leo Gerstenzang began manufacturing ready-to-use cotton swabs after watching his wife apply wads of cotton to toothpicks and then swab their baby. By 1926, the disposable cotton swabs were well on the road to becoming a ubiquitous household product, and were renamed Q-tips.

Although Q-tips were initially intended for baby care, by the 1950s they were marketed for multiple uses, and at least one advertisement showed a cotton swab near — but not in — an adult's ear. These days, the cotton swabs go nowhere near an ear on the brand's social media sites like Instagram, instead acting as makeup applicators or for use in art projects.

If you succumb to the temptation to clean your ear canal with a cotton swab — even once — you're setting yourself up for a cycle of repeated ear-cleaning urges. As far as ears and cotton buds go, use them just for cleaning around the exterior of the ear, but never the inner canal.

"Once you clean all the wax out, then the ear starts to itch," says Dennis Fitzgerald, M.D., an otologist interviewed by NPR. This is despite the fact that stimulating the nerve endings in the ear canal feels good to a lot of people.

Just don't try to fool your doctor into thinking you don't use a cotton swab when investigating your ear canal. "Earwax is only formed in the outer ear," says Rebecca Lee, R.N., and founder of RemediesForMe.com, "so when a doctor sees build-up pushed up against the eardrum, they know it was done by some manual probing."

Now That's Interesting
According to a 2011 study, more than half the patients who visit ear, nose and throat specialists admit to using cotton swabs to clean inside their ears. 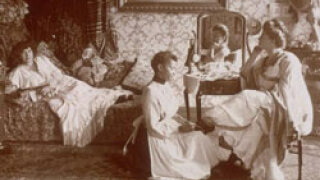 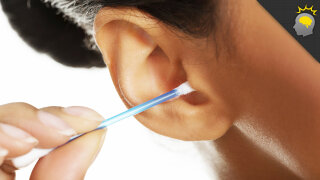