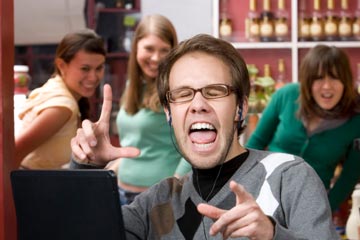 Some of us are more adept at singing whilst gesturing than others. See more human senses pictures.
©iStockphoto.com/CREATISTA

A night out at the karaoke bar will likely confirm most of the suspicions you had about each of your co-workers. Yet, there may be one unanticipated surprise: In addition to not being able to hit the high notes in a Bette Midler song, the new guy in Accounts Receivable can't hit any notes at all.

As you watch him murder several songs over the course of the evening, another thing becomes quite clear: This guy -- grinning all the while and enthusiastically singing his heart out -- has absolutely no idea how bad he is.

Several things could be at play: the effects of a growing bar tab, a general indifference to singing, an immunity to embarrassment, or -- as is the case with about 5 percent of the U.S. population -- this person may be tone-deaf [source: Harvard Medical School].

If you suggest such a thing to another observer in the room, do so in a whisper. Tone deafness (also called amusia) has nothing whatsoever to do with actual deafness, so while your co-worker can't hear how bad he is, he can hear you talk about how bad he is.

The tone-deaf also have perfect hearing when it comes to music. However, what they perceive when they hear music is the sound of a perfect mess. Some tone-deaf people describe listening to music as something akin to listening to pots and pans clanging about. While the rest of us may wince when a tone-deaf person grabs the microphone, the tone deaf can't enjoy anyone else's singing at all. In that sense, karaoke night for the tone deaf is marked by a perfect reproduction of what music sounds like to them.

So what's going on?

Perceiving Pitch: When You Don't Know Which Note is Which

So, what is it that a tone-deaf person isn't perceiving correctly? The answer is pitch. Pitch is the highness or lowness of a sound. If you were to play the first key on a piano keyboard, you would hear a low note, or low pitch. Playing the last key on the keyboard would produce a high note, or high pitch. Why do these keys sound different? The keys are attached to taut strings of different lengths inside the piano. When these strings are plucked (as with any stringed instrument), they vibrate. A vibration extends the entire length of a string. So an amount of force exerted on a longer string will result in a slower vibration (lower note), and that same force on a shorter string will produce a faster vibration (higher note). This vibration transfers to the air around it, ultimately reaching your ears, which begins the brain's processing of a sound.

Through thousands of years of trial and error, humans have selected certain vibrations to be musical notes, since they sound better than other vibrations. The A note of a violin consists of 440 vibrations per second, and if there are a few less or more, it will sound "off" to a majority of people. (Pitch for a particular note can change, however. For instance, different orchestras sometimes assign different frequencies for a given pitch, and a note played at sea level may play at a different frequency than the same note at high elevations in order to produce the same-sounding note.)

Most people can't name a note after they've heard it -- you don't hear someone sing and think, "Oh, that's an E." But if you heard another note, you'd be able to tell which note was higher and which was lower. Tone-deaf people, however, can't differentiate between two different notes, unless perhaps they're radically different.

Now that we know what tone deafness is, we'll take a look at what may be causing it in the next section.

Perfect pitch is the ability to identify on a musical scale a note that is heard without any other notes. This ability also allows a person to sing in the correct key that is requested without hearing any reference notes at all. About 1 in 10,000 people in the United States have perfect pitch, while the majority of us have relative pitch, or the ability to determine the pitch of a note relative to another note that is played before it or after it.

Tone Deafness and Your Nerves

So, what's the reason for the wounded warbles that are emitted from a tone-deaf singer's mouth? Why can't they distinguish pitch?

The brain is still quite mysterious to us, but we know it has a very adaptable nature. People seem to have a range of ability within a given skill set, and their ability can float within that range depending on frequency of exposure or practice. A person with poor pitch perception may be able to improve his or her ability to differentiate pitches or mimic them, but a person who is truly tone deaf may not have the capacity to improve whatsoever no matter how much he or she practices.

The level of exposure to music as a child may play a part, in that the brain may have reduced capacity for pitch mimicry. But this -- nor any other environmental factor -- doesn't account for tone deafness.

Tone deafness seems to be entirely hereditary, and identical twins score similarly when taking pitch tests [source: Barrie]. As we mentioned earlier, it's not the reception of the tone that is compromised, but the brain's processing of it.

And though there is still a great deal to learn about the brain, advancing technologies are providing us better glimpses of how communication occurs between regions of the brain. Researchers have used MRI-like scanning techniques to examine a portion of the brain -- the arcuate fasciculus -- that is a bundle of nerves that delivers information from one part of the brain to another.

While there may be other functions occurring, one of the known roles of the arcuate fasciculus is to relay signals concerning the perception of sound to parts of the brain related to reproducing that sound. In tone-deaf people, however, these nerve fibers were much smaller than normal [source: Society for Neuroscience]. One particular branch of the arcuate fasciculus couldn't be found at all in the tone-deaf subjects.

This band of nerves also seems related to the ability to repeat verbatim a sentence that has been spoken by another person. This condition, conduction aphasia, is entirely separate from tone deafness, but seems to be caused by a similar disruption or diminishment of the arcuate fasciculus [source: Bernal]. So if you tell a tone-deaf person "nice singing" after they've left the karaoke stage, don't do it too snarkily: Tone-deaf people can detect sarcasm and other tonal variations in the human voice.

For lots more articles on music, click over to the next page.

Is there a health benefit to picking your nose?
Can holding in a sneeze kill you?
How Long Does LASIK Last?