Do babies have kneecaps?

Browse the article Do babies have kneecaps? 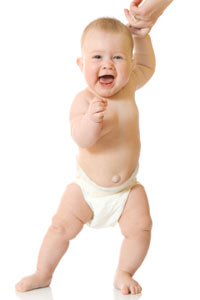 A kneecap could stay off the radar for years in one of these folds.
© iStockphoto.com/rbv

Anyone who has spent any time around toddlers knows that standing and walking are made possible long before steering and braking. Careening around the room propelled by legs that seem to have their own navigational impulses and bouncing off coffee tables, walls and floors -- the early stages of toddling are full of crashes and flameouts.

Much more impressive than their (in)ability to walk is the ability of toddlers to take a licking and keep on ticking. Unless they see someone else reacting to their spill with fear, toddlers generally bounce right back up with smiles on their faces and proceed to advance as quickly as possible into the next immovable object.

Arguably, knees take the brunt of the damage when it comes to toddling. And they seem designed for it. Babies knees are soft, almost undefinable and feel rubbery to the touch.

Whether you're age 2 or 92, your knees work hard to get you around. This important joint is formed by the intersection of the femur (your thigh bone), the tibia (your shinbone) and the patella (your kneecap).

The quadriceps is a muscle group that extends down the length of the femur. Toward your knee, the quadriceps tapers off into the quadriceps tendon, a tough piece of connective tissue. This tendon attaches to the top of your kneecap. On the other side of the kneecap, this connective tissue (now called the patella ligament) continues downward and connects the bottom of the kneecap to the top of the tibia. The kneecap rests in a groove (the trochlea) at the bottom of the femur, where it's able to slide forward and backward.

­This setup enables you to flex your quadriceps, which will pull the quadriceps tendon upward, as well as the kneecap to which it's attached. This in turn pulls the patella ligament, as well as the tibia to which it is attached. So, as your kneecap slides back, it brings with it your lower leg, straightening it out. When the quadriceps relaxes, the kneecap slides forward, allowing the lower leg to bend again.

The thing is, if you X-ray that adorably clumsy toddler whose legs are bending and straightening their way into all sorts of trouble, you won't find a kneecap. So what gives?

The Birds and Bees of Baby Bones 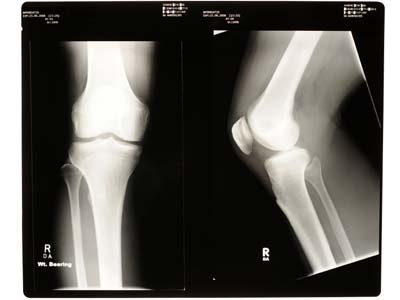 While adults normally have 206 bones, babies start out with a skeletal mix of about 300 different bones and cartilage elements. Various adult bones, such as the cranium, start off in life as several different fragments. At birth, the cranium has three unfused plates, allowing for passage of the baby's head through the birth canal. Over time, these plates fuse into one piece.

All bones start off as cartilage, but many are still cartilage at the time of birth. Cartilage turns into bone over time through a process called ossification. As cartilage develops, a nutrient artery grows into it. This in turn prompts cells called osteoblasts to develop along the lining of the cartilage. These osteoblasts in the cartilage begin producing compact bone, which covers the cartilage. Next, blood vessels begin to spread throughout the cartilage, branching off the nutrient artery and enabling marrow and other nutrients to be dispersed throughout the developing bone. When this occurs, it prompts the development of a primary ossification center, which will continue producing cells that dissolve the cartilage and replace it with new bone.

As such, it takes a little longer than some bones to, well, become bone.

Although it doesn't show up on X-rays, your baby does in fact have kneecaps. They're just not bony kneecaps. At birth, these kneecaps are still cartilage, and remain so for a few years. So all those spills and falls your toddler is taking aren't going to be knee-breakers, just sponge-compressors. By the time your child is anywhere from 3 to 5 years old, those cartilage plates will have fully ossified into big-kid kneecaps, made of real bone. And every year after that, as that bone loses its bounce, those thrills and spills will get progressively less fun until those grown-up babies are creaking and groaning with the rest of us.

For lots more information on bones, cartilage and babies, see the next page.