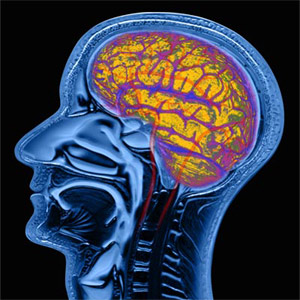 Is there a part of that magnificent organ devoted to ESP? See more brain pictures.
Don Farrall/Photodisc/Getty Images

In the 1980s, publishing house Time-Life Books became famous for a series called "Mysteries of the Unknown," which delved into the realms of the paranormal. Commercials would tease viewers with: "A mother feels a sharp pain in her hand. Far away at that exact same moment, her daughter screams as she touches a hot pan. Just chance?" Believers in paranormal activity would call this scenario an example of extrasensory perception (ESP), or perception beyond our five senses; skeptics would call it hokum. But are skeptics being too skeptical? Is there evidence of ESP locked away inside our brains?

The term "ESP" was first coined by botanist-turned-parapsychologist Joseph Banks Rhine. It encapsulated three major manifestations: the ability to read minds, the ability to predict the future and knowledge of a remote object or person. In his 1934 book, "Extra Sensory Perception," Rhine wrote that his experiments at Duke University -- where students were able to predict symbols on cards they couldn't see with accuracy beyond mere chance -- proved ESP's existence [source: Spence]. However, skeptics point to the fact that scientists have had a hard time replicating Rhine's results, leading many to believe the experiments may have suffered from design flaws [source: Kaku].

Still, this hasn't stopped parapsychologists on their quest to prove ESP to the mainstream scientific community, though they don't have to try so hard in America, where 3 out of 4 people hold at least one paranormal belief [source: Gallup]. For example, Princeton University's Engineering Anomalies Research (PEAR) program conducted a long-running experiment in which subjects tried to use their minds to influence machines, such as a random number generator. According to the Web site, "Over the laboratory's 27-year history, thousands of such experiments … have been performed by several hundred operators. The observed effects are usually quite small … but they compound to highly significant statistical deviations from chance expectations." In this case, results show that mind power can influence technology, though only very slightly -- not quite the experiment that would catapult ESP into the mainstream.

In the test, each participant was placed in a magnetic resonance imaging (MRI) scanner and shown two photographs; simultaneously, his friend or relative was shown one of the photos in another room and asked to "send" that image to the participant. The participant then had to guess which of the two photos was being "sent" [sources: Goldberg; ScienceDaily.com]. In the report published by the Journal of Cognitive Neuroscience, Samuel Moulton, Harvard psychology graduate student, explained, "If any ESP processes exist, then participants' brains should respond differently to ESP and non-ESP stimuli." Meaning, the brain should have responded differently to the image that was being "sent" than to the image that wasn't. The results? Participants didn't react differently to ESP and non-ESP images, according to Moulton. The researchers saw no evidence -- at least among the participants -- that ESP activity exists in the brain.

For now, it seems, the mysteries of the extrasensory brain remain locked away, if they are indeed there at all.

What Happens If You Don't Poop for 47 Days?
Holding Hands Can Ease Pain
It's an Electrical Cheese Sandwich for Your Gut