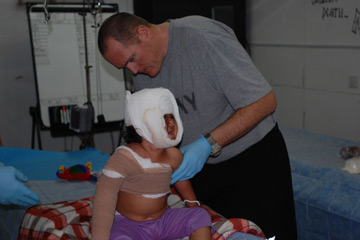 Sgt. David Branshaw of Chandler, Ariz., bandages the burns of 2-year-old Rqiah Mriosh, of al-Swarah, Iraq, at Contingency Operating Station Zulu. Even on the front lines, not all injuries are to soldiers, so medics must be prepared for anything.
Photo Courtesy of U.S. Army/Spc. David Dyer, 3-1 Cav

In the U.S. Army, new enlistees who want to save lives on the battlefield may find their calling as health care specialists, also known as combat medics (68W), or "68 Whiskeys" in Army parlance.

While there are other health care positions available in the Army, you'd be hard-pressed to find a military occupational specialty (MOS) as exciting (and dangerous) as that of the combat medic.

While any enlistee with the willingness and aptitude can become a combat medic, ideally these candidates will possess strong communication skills, empathy, attention to detail, an interest in the sciences (especially biology and anatomy) and the ability to handle lots of stress under the most trying of circumstances.

Enlistees who choose this MOS are far from alone -- 35,000 health care specialists make 68 Whiskey the second-largest MOS in the Army. The only MOS with more soldiers is infantry [source: Parsons].

Medics attend basic training like any other soldiers. After the roughly 10-week basic training has been completed, combat medics go to Fort Sam Houston in Texas for 16 weeks of advanced individual training (AIT), which includes the following:

Once combat-medics-in-training have passed the initial National Registry of Emergency Medical Technician, the training and study becomes more in-depth. One week will be spent learning basic sick-care procedures, such as taking medical histories, performing basic physical exams and identifying common problems that develop in the respiratory, digestive system and musculoskeletal systems.

Upon graduation, about 75 percent of the 68 Whiskeys will be assigned to maneuver units, meaning infantry, armor or artillery. And these aren't units that lurk in the background when the bullets start flying, as we'll learn in the next section.

Angels of the Battlefield

Army physicians, surgeons, nurses and other medical personnel often work under dangerous conditions in combat support hospitals located either at centralized bases attached to air fields, or at smaller bases closer to the front lines.

But the combat medic works directly on the front lines, and no Army unit goes into battle without one. In short, medics are right in the thick of things.

Because they're often in harm's way, combat medics generally carry the same armaments as other members of their unit, often the M-4 carbine or the M-16. (Army chaplains are the only MOS in a war zone that don't carry any weapons at all, though their assistants do.) If combat medics proactively engage in a battle, they lose the protected status afforded them under the Geneva Code. If the unit is attacked, the Geneva Code allows medics to fire in self-defense to protect themselves as well as any wounded in their care. After securing their own safety, medics must quickly shift gears and utilize the lessons of their specialized training as they locate wounded soldiers, treat them and prepare them for transport.

Once wounded soldiers have been initially treated and stabilized, the medic informs leadership of the number of wounded and the severity of the injuries. Today, the vast majority of wounded warriors are evacuated by helicopter and the rest by armored Stryker ambulance. Combat medics brief the medic traveling with the helicopter or ambulance and help load up the injured soldier. From the battlefield, the soldier will be taken to a forward surgical team at the nearest combat-support hospital, where doctors, surgeons and a whole host of health care professionals will treat their injuries to stabilize them further.

From this field hospital, the wounded eventually make it to Landstuhl Regional Medical Center in Germany -- the largest military hospital outside the U.S. -- before returning back to the U.S. for further treatment. For the wounded soldier, the medics clearly deserve their nickname "The Angels of the Battlefield." For the 68 Whiskey, it's a job well done.

Other medical specialists frequently operate behind -- but near enough -- the front lines. For instance, military dentists are located at field hospitals to assist with emergency dental procedures necessitated by facial trauma. These dentists and other medical specialists often operate in unfriendly territory susceptible to mortar fire, improvised explosive devices (IEDs) and other wartime hazards. For many enlistees, the military's medical and dental services provide for their first or most thorough exams. During WWII, Army dentists saw 94,000 patients a day [source: Life].

Whether a health care specialist operates on the front lines depends largely upon his or her MOS, and though treating wounded soldiers while dodging enemy fire really pushes medics to their limits, the military's medical personnel works tirelessly to save the lives of our men and women in uniform.

Want to know more about Army medics and doctors? Check out the links on the next page.