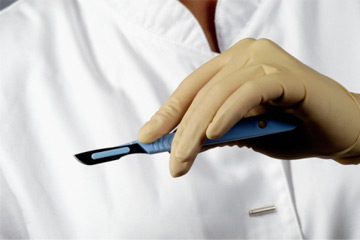 We think of a doctor's weapons as antibiotics or even surgical tools, but what about doctors and medics in the Army? Do they carry actual weapons?
Valueline/Thinkstock

The Army considers an estimated 20 percent of combat-related fatalities to be preventable if the wounded soldier receives prompt medical attention. Many of these should-be-preventable deaths are frequently from injuries that include head and lung trauma or wounds to the chest and abdomen, all of which can result in blood loss. As many as 50 percent of wounded soldiers die from combat-related injuries because they suffer from severe blood loss in the critical moments after their injuries. In fact, about 86 percent of combat deaths happen within just 30 minutes of the injury [source: U.S. Army]. Enter the combat medic.

Army combat medics aren't just trained to save lives in a combat zone; they're also trained soldiers. In addition to emergency medical training, combat medics go through the same basic combat training as all other soldiers, and they have the basic combat skills to protect themselves if under enemy fire. For example, while trying to treat a wounded soldier, a combat medic will need to rely on those field skills to avoid mines and other hidden explosive devices, as well as basic soldiering techniques such as how to enter and exit buildings or open spaces safely.

Combat medics also receive the same basic weapons training as every other soldier. Does this mean they carry weapons? Yes, they do. While medics historically didn't carry weapons, today's combat medics are not only trained to fight, but are allowed to defend themselves if they come under attack, usually at short range and usually in response to a surprise attack while attending to or evacuating a wounded patient.

Why the change? Although the Geneva Conventions protect medical personnel, not all enemies respect the doctrine, and both doctors and medics have found themselves targets on the battlefield. The white armband with a red cross -- the Geneva Convention brassard -- is worn by medical team personnel when they're searching for, treating and evacuating wounded or sick soldiers. Once worn by all medical team personnel, the Geneva Convention brassard has been downplayed in recent wars to decrease the visibility of active medical teams. And since they have often become targets, all medical personnel carry a pistol or service rifle (M-16) at all times, to be used for self-defense only.

Check out the links on the next page for lots more information about Army medicine.

Are Army medics and doctors on the front lines?
What are Army combat medics' main duties?
The History of First Aid in the Army

What constitutes a medical emergency?
What does it take to eradicate a disease?
What exactly is an Army flight medic?