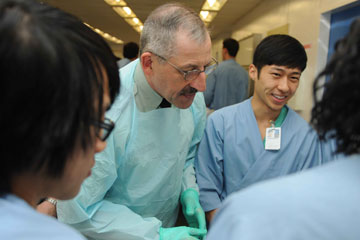 You're interested in serving your country and working as a doctor, but you don't want to actually enlist in the Army. So can medical professionals who want to support the U.S. Army perform this work as a civilian? The answer is yes! In fact, there are hundreds of medical jobs available for civilians in a huge variety of geographic areas.

Those interested may consider the Civilian Corps of the United States Army Medical Command (MEDCOM). MEDCOM has approximately 30,000 civilian employees who care for more than 5 million active and retired soldiers and their families at medical treatment facilities around the world.

MEDCOM civilians work side by side with their military peers, but unlike Army personnel, civilian employees aren't required to go through boot camp, and they don't need to wear military uniforms. Joining as a civilian can be a great option for those with families, because MEDCOM civilians aren't deployed, and they'll never have to worry about mandatory relocation.

MEDCOM usually has an ongoing need for great workers, and a list of some of the organization's "hot jobs" includes everything from drug and alcohol counselors, social workers and psychologists, preventive medicine specialists, nurses, dentists, psychiatrists and pharmacists. If you're interested in applying, you can find a complete listing of MEDCOM career opportunities online.

And as a bonus, you'll find yourself working with some great people: The Army Medicine Civilian Corps falls under the Department of the Army, which was listed as one of the best places to work in federal government in 2009. And if you want to work overseas, there are different regional medical commands around the world that are in need of workers.

For more information on medicine and the Army, check out the links on the next page.