What is the role of a senior medic in the Army? 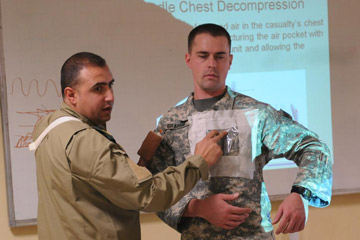 Army medics are known as "the angels of the battlefield," and there's no more welcome sight if you're a soldier injured in battle. While battlefield medicine has been practiced in some form since the very earliest conflicts, there have been incredible improvements in the techniques used to treat and transport the wounded, as well as in the survival rates for soldiers injured in the line of duty.

Before Napoleon Bonaparte's military campaigns, the casualties of war were often treated according to rank, not by the severity of their wounds. Napoleon's chief surgeon, Dr. Dominique-Jean Larrey, introduced both the idea of triage and the battlefield ambulance (originally a horse-drawn wagon with a four-person medical crew) for removal of wounded combatants. Larrey was a big fan of immediate amputation, instead of waiting and risking death by gangrene. Napoleon's beloved chief surgeon also legitimized the concept of providing equal treatment to friend and foe alike.

In America, ambulance wagons were scarcely used in conflicts before the Civil War. Civil War dressing stations were located just behind the front lines, and they usually only carried the basics: bandages, surgical tools and painkillers such as morphine, opium and whiskey. Their sanitation practices left everything to be desired, and the uncleanliness of the surgeons, field hospitals and tools led to widespread infections and death among those treated.

As field medicine improved, so too did the survival rate for wounded soldiers -- despite the increasingly varied ways that soldiers injured each other. In World War I, for example, 8.1 percent of wounded combatants died; in World War II, 4.4 percent of the wounded died [source: Kreiserand].

During the Korean War, mobile army surgical hospitals (MASH), which were developed with quick breakdown and set-up in mind, allowed the field hospital to be moved with the same fluidity as the fighting.

The Vietnam War brought about the widespread use of medevac helicopters to transport wounded soldiers out of harm's way. In World War I, transport of wounded soldiers from the battlefield to a field hospital could take up to two full days; by Vietnam, that time was cut to just two hours [source: Kreiserand].

To learn how to practice modern battlefield medicine in the U.S. Army, you have to learn from a senior medic. What constitutes a "senior medic," and what are their roles in the U.S. Army? Check your pay grade and read the next section to find out.

As with any other military occupational specialty (MOS) in the Army, there's a hierarchy among enlisted medics, each of whom starts out as a lowly E-1, medic private. With time, accomplishment and ability, medics can rise up through the ranks to E-4 (specialist/corporal), E-5 (sergeant), E-6 (staff sergeant) and E-7 (sergeant first class). Another big -- and quite rare -- step up is to E-8 (master sergeant). The highest pay grade is E-9 (sergeant major).

At the battalion level, the most senior medic is usually an E-6 or E-7. These are key leaders who train junior medics of lower ranks. In addition to at least one medic of this rank, there will generally also be six to eight intermediate leaders (usually E-5s or E-6s), and about half a dozen E-4 medics. The rest are E-2s and E-3s [source: Parsons]. As medics increase in rank, they generally become increasingly tasked with administrative duties, training of lower-ranked medics and making sure that lower-ranked medics are carrying out the policies and initiatives decreed by those further up the military chain of command (and for an enlisted medic, there's always someone further up the food chain).

This position is a connection between officers and enlisted medics. The command sergeant major reports to officers about "the situation on the ground" and carries out officers' orders as they relate to enlisted personnel.

When a senior officer gives orders relating to combat medics, it's the senior medic who makes sure those orders are carried out, and this obligation rolls downhill through each level of command. The command sergeant major also helps junior officers who have authority over enlisted personnel but are nonetheless short on experience.

The command sergeant major is in a unique position to affect the drafting of Army medical policies, as well as their implementation. And when this medic walks in the room, every other Army medic (as well as any other lesser-ranked enlisted soldier) pays close attention (while privately hoping that the same close attention isn't paid back in kind).

Are Army medics and doctors on the front lines?
What exactly is an Army flight medic?
The History of First Aid in the Army