What constitutes a medical emergency? 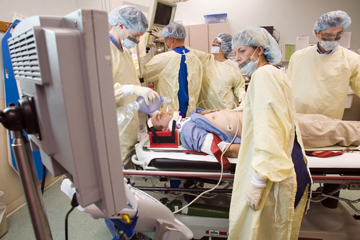 What's the difference between an actual emergency and a serious medical issue?
David Ellis/Getty Images

Be warned that reading a list of things that constitutes a medical emergency will leave you feeling a little nervous about walking out the door into the outside world. Sure, most of us aren't going to throw ourselves into a state of intense hypochondria when we can tell with the utmost certainty that A) we aren't, say, vomiting blood and B) are probably not at risk of doing so any time soon.

However, that doesn't mean you're not going to stop and warily evaluate if just maybe you're feeling a little short of breath. Did your vision just change a little; were those spots that just floated across your eyes? Wait, can't you grip a pen tighter than that; are you losing feeling in your fingers? In other words, if you haven't yet Googled "am I OK?" yet, you're doing great. It's hard to determine if something you're feeling is normal, worrisome or a trauma disguised as either of the former.

So let's just cut to the chase to make sure you're not wasting time staring at the foot you accidentally just amputated whilst cutting wood, wondering if it deserves a trip to the ER. (IT DOES!) Pretty broadly, we can use one definition Medicaid uses to describe a medical emergency: "... The sudden onset of a medical condition manifesting itself by acute symptoms of sufficient severity (including severe pain) such that the absence of immediate medical attention could reasonably be expected to result in placing the patient's health in serious jeopardy; serious impairment to bodily functions; or serious dysfunction of any bodily organ or part" [source: Cornell]. So if you suddenly have a severe change in your body that just might put your health at risk, get thee to the ER.

That all sounds well and good, but that definition puts the onus of responsibility for deciding an emergency on a patient. If you're having a terrible migraine with physical impairments, you might confuse it for a stroke. Now a migraine is better than a stroke, but it might mean that insurance such as Medicaid isn't going to cover your "non-emergency" even if it legitimately seemed like one. So in 1997, Medicaid adopted the "prudent layperson" definition of medical emergency, which said that a "prudent layperson, who possesses an average knowledge of health and medicine, could reasonably expect the absence of immediate medical attention to result in" serious jeopardy [source: Riner]. See the difference? Now you could expect to have Medicaid cover the presentation of symptoms, not just the eventual diagnoses [source: VA Puget Sound Health Care System].

Unfortunately, while the prudent layperson definition applies to any commercial insurance under the Affordable Care Act and Medicaid enrollment programs, some Medicaid fee-for-service programs don't include it. Of course, that doesn't mean you have to sit at home and wait it out. If you're having any kind of scary symptoms, don't be shy. Get yourself to the ER, or call your doctor right away.

10 Tips to Get You Through a Trip to the ER
Can an emergency room refuse to treat you?
What Happens When Your Insurance Says Your ER Visit Was 'Avoidable'?

10 Future Jobs in Health Care
What happens if you go to the ER and don't have insurance?
Do antibiotics interact with dairy?