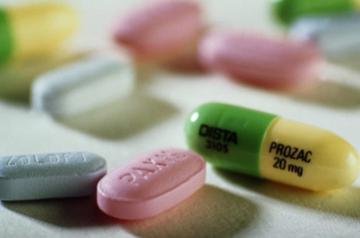 Zoloft, Paxil and Prozac are some of the most common antidepressants. See more drug pictures.
Jonathan Nourok/Getty Images

What does this remarkable surge in antidepressant popularity say about how our society now views depression?

Before the 1980s, seeing a psychiatrist was the preferred treatment for depression. But advances in technology have allowed new insights into the workings of the brain and instigated a growing interest in antidepressants. Now, even primary care physicians, not just psychiatrists, have become frequent prescribers [source: Lieberman]. Between 2005 and 2008, 11 percent of Americans 12 and up were taking antidepressants [source: CDC].

So what's the reason behind the rising number of antidepressant prescriptions? One reason is that, despite their name, antidepressants are not prescribed solely for depression anymore. They are also used to treat chronic pain, anxiety, panic disorder, obsessive compulsive disorder and even eating disorders. Another reason could be that more people are confiding in their doctors about their struggles with depression. When you think of it that way, it seems like a positive trend in the United States -- patients are comfortable sharing the problem with doctors, and doctors are recognizing and treating it.

But the numbers also raise questions about misdiagnosis and overprescription. Are we too quick to throw a prescription at any old emotional problem? Read on to learn more about this debate.

You can't really address the reasons for antidepressant popularity without addressing the business of antidepressants. In 2004, brand-name antidepressant companies made more than $14 billion [source: ResearchandMarkets]. These sales mean big business, and direct-to-consumer advertising (such as television commercials) has helped fuel it. Studies indicate that this kind of advertising has contributed to the growth in prescriptions [source: Kravitz]. When patients see commercials for antidepressants, such as Zoloft, and think that it can help them, they go to their doctors and request it. Doctors are more likely to prescribe an antidepressant when a patient specifically asks for it.

Some believe doctors are usually too anxious to diagnose someone with depression. The symptoms for depression from the Diagnostic and Statistical Manual of Mental Disorders (DSM-IV) include:

But even with these parameters, distinguishing severe depression from natural periods of feeling "down" can be a murky call. Professor Gordon Parker thinks doctors interpret the common blues as clinical depression all too often [source: BBC News]. In a long-term study he conducted, he found that a great majority of people could be diagnosed as depressed on the criteria that doctors use. He took this to mean the criteria for depression is too loose.

If you are hesitant to take antidepressants or don't think your condition is severe enough to warrant therapy, you have options. Regular exercise, for instance, can dramatically relieve depression. In addition, maintaining a balanced, nutritious diet and reducing the intake of stimulants, such as cigarettes and caffeine, can help as well. For more information about antidepressants and other related subjects, go to the next page.

The Downside to Antidepressants

The most common reason people quit antidepressants is the negative side effects. These include nausea, weight gain, loss of sexual appetite, erectile dysfunction, fatigue, and sleeplessness, among other things [source: MayoClinic]. In some rare cases, antidepressants have contributed to suicides of children and adolescents. In 2004, the FDA set a requirement that antidepressant containers come with a "black-box" warning indicating this risk [source: FDA]. Studies now reveal that suicidal thoughts might result from antidepressants decreasing the user's levels of dopamine [source: Biotech Business Week].

FDA Approves the World's First Digital Pill
Can we use microbes to fight disease?
What does it take to eradicate a disease?