by William Harris
NEXT PAGE 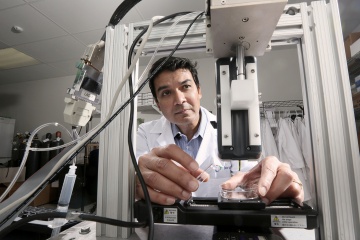 Dr. Darryl D'Lima, an orthopedic specialist, works with a bioprinter he helped to develop located in the Shiley Center for Orthopedic Research & Education at Scripps Clinic. D' Lima has enlisted bioprinting in his cartilage regeneration research.
© Sandy Huffaker/Corbis

To make his eponymous monster, Victor Frankenstein needed body parts, but organ donation, as we know it, wouldn't emerge for another 135 years or so. And so the fictional doctor "dabbled among the unhallowed damps of the grave" and visited dissecting rooms and slaughterhouses, where he collected parts and pieces like some sort of ghoul.

To make a toy using this technique, a manufacturer loads a substance, usually plastic, into a mini-fridge-sized machine. He also loads a 3-D design of the toy he wants to make. When he tells the machine to print, it heats up and, using the design as a set of instructions, extrudes a layer of melted plastic through a nozzle onto a platform. As the plastic cools, it begins to solidify, although by itself, it's nothing more than a single slice of the desired object. The platform then moves downward so a second layer can be deposited on the first. The printer repeats this process until it forms a solid object in the shape of the toy.

In industrial circles, this is known as additive manufacturing because the finished product is made by adding material to build up a three-dimensional shape. It differs from traditional manufacturing, which often involves subtracting a material, by way of machining, to achieve a certain shape. Additive manufacturers aren't limited to using plastic as their starting material. Some use powders, which are held together by glue or heated to fuse the powder together. Others prefer food materials, such as cheese or chocolate, to create edible sculptures. And still others -- modern versions of Victor Frankenstein -- are experimenting with biomaterials to print living tissue and, when layered properly in biotic environments, fully functioning organs.

That's right, the same technology that can produce Star Wars action figures also can produce human livers, kidneys, ears, blood vessels, skin and bones. But printing a 3-D version of R2-D2 isn't exactly the same as printing a heart that expands and contracts like real cardiac muscle. Cut through an action figure, and you'll find plastic through and through. Cut through a human heart, and you'll find a complex matrix of cells and tissues, all of which must be arranged properly for the organ to function. For this reason, bioprinting is developing more slowly than other additive manufacturing techniques, but it is advancing. Researchers have already built modified 3-D printers and are now perfecting the processes that will allow them to print tissues and organs for pharmaceutical testing and, ultimately, for transplantation. 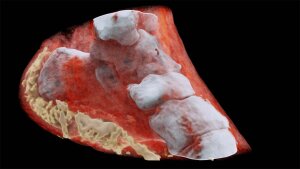 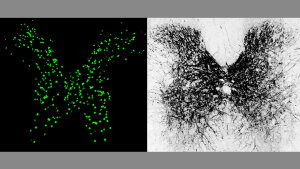