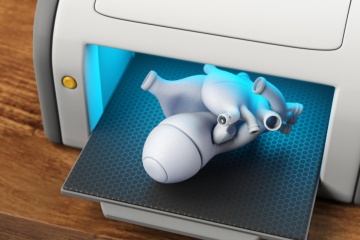 The heart may be one of the easier organs to make with a bioprinter, said Stuart K. Williams, the head of the Cardiovascular Innovation Institute, in a 2013 interview with Wired.
Maciej Frolow/Photographer's Choice RF/Getty Images

When researchers built 3-D printers capable of depositing bioink and forming living masses of cells, they celebrated a major achievement. Then they immediately began to tackle the next big problem: How can bioprinting produce an organ for a specific person? To accomplish this, a medical team needs to collect data about the organ in question -- its size, shape and placement in the patient's body. Then team members need to concoct a bioink using cells taken from the patient. This ensures that the printed organ will be compatible genetically and won't be rejected once it's transplanted in the patient's body.

For simple organs, such as bladders, researchers don't print the living tissue directly. Instead, they print a 3-D scaffold made of biodegradable polymers or collagen. To determine the exact shape of the scaffold, they first build a 3-D model using computer-aided design (CAD) software. They usually define the exact x-, y- and z-coordinates of the model by taking scans of the patient using computerized tomography (CT) or magnetic resonance imaging (MRI) technology.

Next, researchers get the cells they need by taking a biopsy of the patient's bladder. They then place the cell samples in a culture, where they multiply into a population sufficiently large enough to cover the scaffold, which provides a temporary substrate for the cells to cling to as they organize and strengthen. Seeding the scaffold requires time-consuming and painstaking handwork with a pipette. It generally takes about eight weeks before such artificial bladders are ready for implantation. When doctors finally place the organ in the patient, the scaffold has either disappeared or disappears soon after the surgery.

The procedure above works because bladder tissue only contains two types of cells. Organs like kidneys and livers have a far more complex structure with a greater diversity of cell types. While it would be easy enough to print a scaffold, it would be almost impossible to recreate the three-dimensional structure of the tissue manually. A bioprinter, however, is ideally suited to complete such a time-consuming, detail-oriented task.