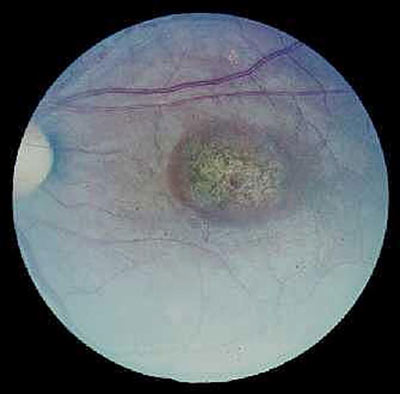 The entire system runs on a battery pack that's housed with the video processing unit. When the camera captures an image -- of, say, a tree -- the image is in the form of light and dark pixels. It sends this image to the video processor, which converts the tree-shaped pattern of pixels into a series of electrical pulses that represent "light" and "dark." The processor sends these pulses to a radio transmitter on the glasses, which then transmits the pulses in radio form to a receiver implanted underneath the subject's skin. The receiver is directly connected via a wire to the electrode array implanted at the back of the eye, and it sends the pulses down the wire.

When the pulses reach the retinal implant, they excite the electrode array. The array acts as the artificial equivalent of the retina's photoreceptors. The electrodes are stimulated in accordance with the encoded pattern of light and dark that represents the tree, as the retina's photoreceptors would be if they were working (except that the pattern wouldn't be digitally encoded). The electrical signals generated by the stimulated electrodes then travel as neural signals to the visual center of the brain by way of the normal pathways used by healthy eyes -- the optic nerves. In macular degeneration and retinitis pigmentosa, the optical neural pathways aren't damaged. The brain, in turn, interprets these signals as a tree and tells the subject, "You're seeing a tree."

It takes some training for subjects to actually see a tree. At first, they see mostly light and dark spots. But after a while, they learn to interpret what the brain is showing them, and they eventually perceive that pattern of light and dark as a tree.

The first version of the system had 16 electrodes on the implant and is still in clinical trials at the University of California in Los Angeles. Doctors implanted the retinal chip in six subjects, all of whom regained some degree of sight. They are now able to perceive shapes (such as the shaded outline of a tree) and detect movement to varying degrees. The newest version of the system should offer greater image resolution because it has far more electrodes. If the upcoming clinical trials, in which doctors will implant the second-generation device into 75 subjects, are successful, the retinal prosthesis could be commercially available by 2010. The estimated cost is $30,000.

Researchers are already planning a third version that has a thousand electrodes on the retinal implant, which they believe could allow for facial-recognition capabilities.

For more information on the Argus II system, biotechnology and related topics, check out the links below.