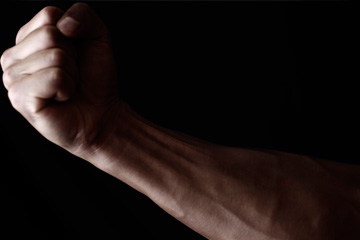 You might be able to grow back the tip of your pinkie finger, but you can't regrow a whole limb (yet).
RunPhoto/Getty Images

Not only can humans regrow limbs, but they already have.

We're kind of playing fast and loose with the definition of "limb." Technically, nobody has yet grown back an arm or a leg. But there have been multiple cases of people growing back fingertips [source: Muneoka]. In 2010, a Californian woman was able to grow back the tip of her pinkie finger using an experimental powder that is supposed to encourage stem cells to build rather than scar [source: Nosowitz]. Jury is still out on how -- and why -- the process worked. But we're not just telling you about a brand-new pinkie finger for fun. It might be a clue to how regrowing limbs might work in the future.

Here's the thing: When the woman's pinkie tip was severed, there was still a bit of fingernail left on the digit. And some researchers looked into whether the nail itself might have something to do with the process of regeneration. What they found was that fingernails contain stem cells that can lead to cell growth. They call these stem cells "Wnts," and they've been shown to promote tissue and bone growth (along with fingernails).

Basically, the stem cells in the fingernail will produce cells for the whole finger. Scientists have even managed to produce Wnts in mice without the natural stem cells being present, meaning that they could regrow cells by introducing Wnts [source: Nosowitz]. That means that -- just like our friend the salamander, which can regenerate amputated limbs like crazy -- humans might have a capability for natural limb regeneration.

The only thing that seems to set us apart is that our tissue scars. Researchers believe that if they can somehow control that scarring mechanism, they might be able to allow these Wnts to do their natural, reproductive duty.

Can people regrow teeth?
Children Can Regrow Their Fingertips. How Cool Is That?
Can humans regrow fingers?

Could Stem Cells Eventually End the Transplant Organ Shortage?
Programmable Hair Created With 3-D Printing Breakthrough
How can a heart power its own pacemaker?