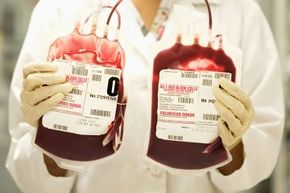 When you donate blood, you’re automatically donating plasma -- it’s a component of blood. But you can also donate plasma on its own.
© Fuse/Thinkstock

Your blood delivers essential nutrients (such as amino acids), electrolytes, antibodies, hormones, vitamins and oxygen to all the tissues throughout the body, and it carries away carbon monoxide and waste. It's not just on the menu for the undead; it keeps the human body running, and without it you couldn't survive a vampire attack or just a normal day. But it's not just ]Nosferatu and those bloodthirsty summertime mosquitoes who want to suck your blood. Every two seconds, someone in the U.S. needs blood, or a blood component. There's no substitute for the real thing -- and a single victim of a car crash could require as many as 100 pints of life-saving blood.

Your body needs real blood to function properly, and blood cells, platelets and plasma -- the basic components of human blood -- are only available from human donors. About 38 percent of American adults are eligible blood donors, but fewer than 10 percent of those who can actually donate to the blood supply -- that equals about 9.2 million people donating blood every year. [source: American Red Cross].

Healthy bodies are continually regenerating their own blood, which means blood donors need only wait a few weeks between donations, depending on what you're donating. While no one ever has said they want to suck your plasma, plasma's an important component of blood; the body regenerates plasma faster than it's able to make blood, which means healthy people can donate plasma as often as twice in one week as long as they get about 48 hours of recovery in between visits. Some donation centers and blood banks recommend you wait 28 days between plasma donations; for comparison, the minimum waiting time to donate blood is eight weeks [sources: Access Clinical, Carter BloodCare].

But before you can decide if you want to be a blood or plasma donor, you need to know whether or not you're eligible; while blood donations often fall short of need, not all of us make good donors.

There are a few things to keep in mind as a donor candidate. For instance, did you know if you spent three or more months in the U.K. between 1980 and 1996 you can't donate blood in the U.S.? You can't, indefinitely -- it has nothing to do with how you spent your time there and everything to do with variant CJD (vCJD) concerns (that's the human form of bovine spongiform encephalopathy, or mad cow disease).

Let's talk about who is and who isn't eligible to donate.

Certain criteria will keep you from becoming a donor. For example, donors are screened for age (you must be at least 17 years old to donate blood) and weight (you need to weigh at least 110 pounds [50 kilograms] to be a donor). The average human has about 10 to 12 pints of blood circulating throughout the body at any given time, which is about 7 percent of your total body weight. Donors who weigh between 110 and 149 pounds (50 and 68 kilograms), for example, are allowed to donate a volume of 1.5 pints (705 milliliters) of plasma while the volume of donated blood plasma for those who weigh 175 pounds (79 kilograms) or more is as much as 2 pints (903 milliliters) -- your weight determines how much you can safely give [source: Access Clinical].

Donors should expect a physical examination and medical history review during their first plasma donation visit. During each subsequent visit, expect a review of your medical history and a check of your vital signs (blood pressure, pulse and temperature); a quick finger prick may be performed to test for anemia and your protein levels. Donors are asked questions about their history with hepatitis, cancer or other major illness or surgery listed on the FDA's medical deferral list -- whether they've had a fresh tattoo, piercing, acupuncture session or any needle stick within the last year (depending on the state where you live), as well as personal habits, travel habits and residency. You'll have to wait a year upon returning home to donate blood if you've traveled to an area known as a malaria risk, such as Central Asia or Africa, for instance. Pregnant women may donate six weeks after the end of the pregnancy (donating while nursing is OK). 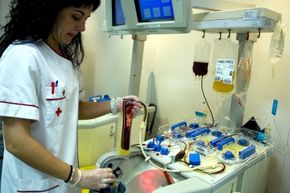 An apheresis machine in use at a Red Cross donation center in Madrid, Spain.
© Ismael Alonso/Cover/Getty Images

There are two types of plasma donations, recovered plasma and source plasma -- the plasma's the same, it's just the method of donation that differs.

To understand plasma donations, first we need to know a little bit about blood. Whole blood donations -- those blood drive donations where blood is drawn through a needle into a plastic blood bag -- include all the components of our blood. A little less than half (45 percent) of human blood is made up of cells -- red cells, white cells and platelets (small cell fragments, and unlike the red and white cell types these are colorless) -- and the other half (about 55 percent blood volume) is plasma, the pale yellow fluid those cells are suspended in.

When you donate whole blood, and most donations are whole blood, the individual components of that blood can be separated and used independently when and where they're needed; plasma donated through this method is called recovered plasma. It's possible that a single donation of whole blood could go on to help as many as three people, and it's estimated that just one whole blood donation contains nearly 250 milliliters of recovered plasma [source: American Red Cross, Baxter].

It's also possible to donate components of your blood, instead of just the complete package. During red blood cell donation, for example, called double red cell donation, the platelets and plasma are separated from the blood cells and transfused back into the donor during donation; platelets, as well, can be donated, through a similar cell-separation process. And plasma, too, can be donated as a blood component.

The process of donating plasma is called plasmapheresis, and plasma donation begins a lot like any other blood donation, with a needle in the arm. The blood flows from the donor's arm through an IV line and into an apheresis machine where centrifuge is used to separate the blood components. Your blood cells and platelets are then transfused back into your body with a little saline to make up the lost blood volume of the donated plasma.

Plasma is mostly water, but the 8 percent that isn't is made up of proteins and mineral salts (you'll also find hormones, fats, sugars and vitamins in there). Blood proteins include albumin, a globular protein made by the liver; gamma globulins, which are proteins that contain antibodies against bacterial and viral infections, and blood-clotting proteins such as fibrinogen. During plasmapheresis these proteins are removed and collected, and then used to manufacture therapeutic products used to prevent, manage and treat certain rare diseases, life-threatening diseases, chronic illness and genetic conditions. As many as 500 unique proteins have been identified in human blood, and as many as 150 of them are used in therapeutic products [source: DonatingPlasma].

Plasma donated through plasmapheresis is called source plasma, and it's estimated that a single person can supply between 600 and 800 milliliters of plasma in one donation [source: Baxter]. Source plasma donors who donate through plasma donation centers may be compensated for their time, although compensation rates and rules may vary; and any plasma that's purchased rather than donated must be used in manufacturing rather than in human transfusions.

Plasma protein therapies (PPTs) are considered biologic medicines, which means that unlike many of the common drugs we take which have been manufactured through chemical ingredients, these are protein-based therapies developed from human genes.

PPTs are typically given through an infusion or injection. RH-negative pregnant women, for example, receive a type of PPT called hyperimmune globulin therapy. Rhogam is a product made with human plasma and given to both mother and newborn to prevent fetal complications; hyperimmune globulin therapy is also used to treat patients with infectious diseases including rabies, tetanus and liver conditions such as hepatitis and cirrhosis, as well as those who undergo organ transplant.

Human serum albumin therapy, also a form of PPT, is used to treat burn victims as well as shock and trauma patients; it's also a relied-upon therapy in the emergency room and during major surgeries.

Plasma proteins are also used as therapy in genetic bleeding and clotting disorders, including Von Willebrand disease, antithrombin disorders and hemophilia. It takes a lot of plasma to make a plasma protein therapy product, and as many as 1,200 plasma donations can be required to treat just one hemophiliac patient for one year [source: DonatingPlasma].

Collected plasma is processed before it's turned into a plasma product; it can take up to 9 months between the time the plasma was donated and the time it's used in a therapeutic product [source: Baxter]. After being screened for known infectious diseases (including HIV, hepatitis and other transmissible diseases), the plasma first goes through something called the blood plasma fractionation process.

Fractionation was developed during World War II by biochemist Edwin Cohn, who pioneered a method for separating the plasma protein serum albumin from whole blood, a life-saving alternative therapy for those who were wounded during battle and needed plasma. Today's technologies for separating blood components include centrifugation and filtration which spins blood to separate the liquid and solid components, thermal and chemical inactivation procedures, ultrafiltration, diafiltration, nanofiltration and chromatography. Since the 1980s, some plasma proteins have been successfully cloned, including factor VIII.