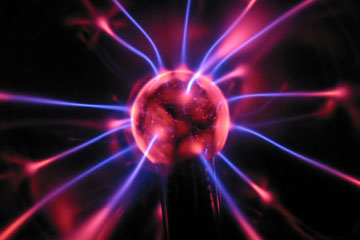 Proton therapy is ideal for tumors that are oddly shaped and/or situated in areas that can't handle much radiation exposure.
©iStockphoto.com/llandrea

Most people who are diagnosed with cancer face a pretty fearsome treatment plan that can include surgery, chemotherapy and/or radiation. Some will have to undergo all three. The lucky ones may only have to go through radiation treatment, which requires no cutting and probably won't have them throwing up every hour or so for a week. But even then, they're not that lucky. Traditional radiation treatment using X-ray beams has its downsides, especially for children and for people with awkwardly placed tumors.

Radiation therapy for cancer is based on the idea of selective cell destruction, and it destroys cells using energy. High-energy particles damage a cell by altering its atoms.

Everything in the body is made up of atoms. Two or more atoms together create a molecule, and molecules are the working components of cells. The function and health of a molecule depends entirely on the composition of its atoms.

When high-energy particles enter the body and run into atoms, they basically cause the atom's electrons to become so excited (energized) that they bounce out of their orbits, creating an atom that is ionized, or charged. A charged atom is very different from a non-charged atom, and this change causes damage to the molecule. The molecule can't work the way its supposed to if its atoms are altered. Enzymes in the cell rush to repair this molecular damage, but cancer cells are slower than healthy cells to create these enzymes. The end result is that more cancer cells than healthy cells end up dying from the radiation exposure.See the next page to learn how proton beam therapy can reduce radiation exposure.

The problem with X-rays as an energy source is that they're not easy to control. They have a low mass and a high energy, making it difficult to direct exactly where and how they interact with body tissue. Most body tissue doesn't absorb or block X-rays, so they just keep moving right through the body, releasing energy. When an X-ray enters the body, it emits a tremendous amount of energy at the point of entrance. That's why X-ray treatment leaves people with a tan at the treatment site -- their skin is receiving a lot of radiation. As the X-ray continues into the body, it continues to release energy. As long as the cancer tumor is somewhere in the path of the X-ray, it receives some of that radiation. But so does the healthy tissue all around it. The tissue damage that results from this type of radiation therapy can cause serious problems for the patient if the tumor is in a particularly sensitive area like the brain, the eye, the lungs, spinal cord or liver. It can cause irreparable organ damage. And for children, any tissue damage can be detrimental to their development. In order to limit the extent of collateral tissue damage, oncologists will bombard the tumor area with the lowest level of effective radiation.

Proton-beam therapy can avoid this type of collateral damage. Protons are positively charged atomic particles, and they have tremendous energy but also tremendous mass. They're easier to control than X-rays: They slow down as they encounter body tissue. Protons can actually be set to release their energy at a specific point in body.

Proton beams don't emit energy in a constant stream. They typically release it in increasing amounts as they start to slow down, because the slower they move the more atoms they have time to hit. And when they stop moving, they release most of their energy in one giant burst of radiation. After that burst, there's very little energy left, and they just stop. There's no "exit dose" of radiation like there is in X-ray therapy.

By altering the proton beam's energy level, which determines its velocity, doctors can send it to a very particular tissue depth. At that exact depth -- at the precise location of the tumor -- the protons release their energy. There's very little radiation damage to the tissue surrounding the tumor. By arranging various proton beams of different energies on a three-dimensional plane, doctors can create a burst of radiation that exactly matches the shape and location of the tumor. Proton therapy is ideal for tumors that are oddly shaped and/or situated in areas that can't handle much radiation exposure. With protons as the energy source, doctors can bombard the tumor with much more energy than they can using X-rays, because they don't have to adhere to the lowest common denominator approach in which the amount of radiation directed at the tumor has to be low enough for the surrounding tissue to survive the treatment. This means proton therapy can destroy a tumor in fewer sessions than are required in X-ray therapy. 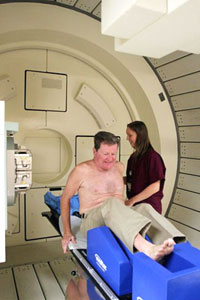 Cancer: What You Need to Know
Can epigenetics prevent cancer?
5 Things to Know About X-Ray Radiation