What are the future limits of replacement parts for the human body? 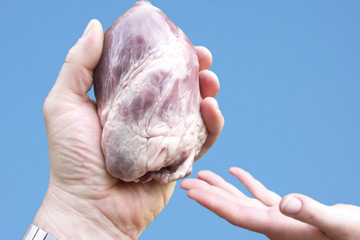 On Dec. 23, 1954, the first successful organ transplant was performed. The surgery, a kidney transplant from one brother to his twin, capped almost 50 years of research about organ replacements. Doctors had been performing blood transfusions for decades, and they successfully replaced a body part -- the cornea -- in a 1905 surgery. But successful organ transplants (success being defined as survival of the new organ for at least one year) eluded doctors from 1906 to 1954 [source: Altman LINK TO LMI].

While the first 50 years in transplants were slow going, the next five decades were a blur of technological advancement. Now, doctors can replace every part of the human body, from skin and bones to organs, hands and faces. Prosthetic limbs are no longer hooks but robotic attachments that can integrate with the wearer's mind. It's no longer science fiction to imagine that we could slowly replace our organs as they wear out, thus extending our lives and preventing illnesses.

Still, there are some challenges in the world of replacement parts. For one, demand for parts far outweighs supply, and every year, people on the transplant list die before they can receive a replacement. That shortage has led some scientists to experiment with growing body parts in the laboratory. With just a few cells, doctors have been able to engineer everything from skin to bladders. Some scientists have fine-tuned a method that involves using an inkjet printer to build organs; instead of shooting ink onto paper, these printers can spray cells onto scaffolding to create hearts and lungs. Researchers would also like to conduct further work with embryonic stem cells, which can be converted into any type of body tissue, a process known as therapeutic cloning. However, research with embryonic stem cells has been limited due to controversy over whether these cells represent a future person whose rights must be respected.

Such ethical arguments will probably always serve as a limit on replacing human body parts. For all of the lives saved with transplants, some people are still uncomfortable with the idea of doctors "playing God." In the deaf community, many people frown on the use of cochlear implants that can restore hearing, arguing that deafness isn't a handicap to be fixed. And if we become proficient at growing organs, will it change how people live? Is it fair for people to smoke for years if they know that lungs are being grown in a nearby laboratory? Will the rich be able to replace body parts for centuries, while those who are too poor to afford a new heart face shorter lives? And though researchers may not be able to grow an organ as complex as the brain from human tissue, they may be able to use technology to do so -- we could be headed for a future in which our minds could be downloaded to a computer chip as our brains give out.

Beyond ethical limits, there is one more important physical limit to consider: The human body is unfriendly to parts it wasn't born with. One of the biggest challenges in organ transplants is ensuring that the body doesn't reject the organ, and organs grown in the lab, even if they're made from the recipient's tissue, are no easier for the body to accept. Right now, it seems, the limits for replacement parts are firmly set by our own bodies.

How Fecal Transplants Work
How 3-D Bioprinting Works
How are stem cells used in medicine today?