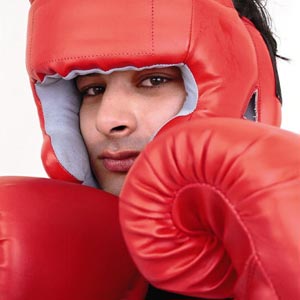 Ikram Haq, who received a double cornea transplant, poses in a photo showing his love for boxing to mark the centenary of the world's first successful cornea transplant in 2005.
Rankin for UK Transplant via Getty Images

For two small organs sitting on our faces, our eyes are pretty smart. They can process 36,000 bits of information every hour and have 2 million working parts [source: Convery Optometrists]. Can other human organs like the gallbladder and the lungs top that? We don't think so.

So exactly what is the cornea? It is our eye's outermost layer, the clear surface that covers the colored iris and the round pupil in a person's eye. The cornea has one specific purpose: to focus the light that comes into our eyes so we can see clearly. In order to do this effectively, our corneas must be clear and cloud-free.

Even though it's dome-shaped, the cornea is really nothing more than a group of cells and proteins. It's no bigger than a dime and no thicker than a credit card [source: University of Michigan Kellogg Eye Center].

But sometimes this "window" becomes injured, diseased or scarred. When this happens, the cornea begins to distort the light that enters it and a glare is produced. A person experiences blurred vision or even blindness. To correct the problem, an ophthalmologist might first suggest wearing eyeglasses or special contact lenses. She might even advise medication to alleviate any painful swelling. If these methods don't work, then cornea transplant surgery might just be the next step.

What circumstances make a person a good fit for corneal transplant surgery? If you're experiencing corneal failure after cataract surgery; have a scar resulting from an injury or poke in the eye; have a bacteria or fungus from a contact lens; or if your eye rejected a previous corneal transplant, you may qualify. Basically, if a person's vision cannot be corrected using non-surgical means, a transplant might be in order.

The next step is to search for a donor. Since almost anyone can donate their corneas after they die, there's not a long wait to receive one [source: Mayo Clinic]. When a healthy cornea is found, the donor will be tested for the AIDS and the hepatitis virus.

On the next page, we'll talk about the surgery and the recovery.

During the cornea transplant surgery, you'll be given either a local or general anesthesia depending on your age, the medical shape you are in or the diseased state of your eye. This is an outpatient procedure.

There are a few types of cornea transplant surgery. The most traditional that's been around for more than 100 years is called penetrating keratoplasty (PKP) which involves removing the entire cloudy cornea. The physician cuts out the central part of the diseased cornea, and the donor cornea is placed in the opening and sewn in with fine thread, which stays in until the eye has healed. After the operation, doctors give antibiotic drops to the patient to ensure that infection doesn't take place [source: Duke University Health System Eye Center].

Sometimes only part of the cornea needs to be replaced. The human cornea is made up of three layers. The outer layer is called the epithelial layer, the middle layer is called the stromal layer and the inner layer is called the endothelial layer. The job of the endothelial cells is to keep the cornea clear. When these cells stop working, the cornea can fill with fluid and become opaque. Instead of removing the entire cornea, doctors remove the diseased endothelial cells and replace them with healthy endothelial tissue that help clear the cornea. This type of surgery is called Descemet's stripping endothelial keratoplasty (DSEK)[source: Duke University Health System Eye Center]. When a corneal disease affects only the front of the eye, the deep anterior lamellar keratoplasty (DALK) method involves removing only the front part of the eye and replacing it with a front of a donated cornea [source: Duke University Health System Eye Center].

After the surgery and recovery, patients leave with their designated driver. Typically, they return the following day for a follow-up visit. Your ophthalmologist will decide when the stitches need to be removed. Sometimes they stay in your eye up to a year, or they can be left in your eye permanently [source: Eye Care America].

As with any surgical procedures, there are risks. For the most part, cornea transplants are safe, but complications can include eye infection, cataracts (clouding of the eye's lens), glaucoma (increased pressure inside the eyeball), problems with stitches, swelling, and of course, rejection of the donor cornea [source: Mayo Clinic].

Rejection refers to the process when your body's immune system mistakenly attacks the donor cornea. About 20 percent of transplant patients experience this problem [source: Mayo Clinic]. Signs of rejection include pain, loss of vision, redness and sensitively to light. If detected early, these problems can be treated.

After recovery, your vision might be worse than it was before while your eye gets used to its new cornea. This is normal, so don't be alarmed. In fact, the healing process can take from several weeks to several months.

The average person blinks 12 times per minute. That means most of us blink about 10,000 times each day. No wonder our eyes are tired by the time we hit the sack [source: Convery Optometrists].