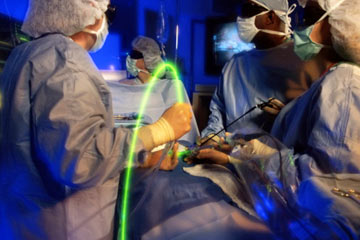 Doctors performing laser spine surgery remove the sources of nerve sensitivity and pain by lasering off the ends and decreasing the size of the disks between vertebrae.
Getty Images/Robert J. Herko

Many people with back pain eventually get to a point when they would do anything -- anything at all -- to end their pain. Having surgery, or going under the knife, is required in very few cases, so some patients consider having laser surgery for relief instead. Lasers have been used for medical and surgical procedures since the early 1960s and have proven effective when used for correcting vision and assisting in neurosurgeries, for example, but what about in laser spine surgery?

Despite the fact that thousands choose to undergo laser procedures in spine clinics and outpatient centers, so far none of the most recognized health authorities in the United States, or elsewhere, endorse laser spine surgery. Why not?

Both the National Institutes of Health (NIH) and the Mayo Clinic state that the usefulness is still unproven even though lasers have been used in spinal surgery since the 1980s. A representative for the neurosurgery department at the Mayo Clinic says none of its surgeons "use or recommend laser spine surgery" [sources: Deen; NIH].

Despite a lack of official, professional endorsements, laser spine surgery is big business in the U.S., and many health practitioners offer and perform the procedure. Likewise, a number of individuals find relief through laser surgery, but how often the results are positive and long lasting has not been documented in formal clinical studies.

So what types of cases are being treated, and who is performing laser spine surgery? You wouldn't find a foot doctor or anesthesiologist operating on a person's back -- would you? We'll look inside the pain and the practice, next.

Types of Back Pain

Patients with back pain usually experience either acute or chronic pain. Acute back pain is most common and typically lasts about six weeks or less, while chronic pain is more rare and usually persists for six months or more. Someone with acute pain has usually experienced a fall, sports injury or car accident, for instance, while those with chronic pain may not be able to connect their discomfort with a single impact or cause [source: NIH].

Treatment for acute pain includes rest, physical therapy and pain relievers, but often acute pain will resolve over time and most often surgery is not needed or recommended. Some people with chronic back pain, however, will be good candidates for minimally invasive surgeries for disk decompression or repair and can have an outpatient procedure with a healing time of days or several weeks. But the vast majority of people don't require surgery [source: NIH].

Chronic cases where a spinal fusion is advised -- such as in the case of spondylolisthesis, a condition where the vertebrae slips out of place -- often require traditional surgery with a large incision, a resetting of the spine and a fusing of bone alongside the repair to keep it immobile. Patients requiring fusion are typically not candidates for minimally invasive surgeries or outpatient procedures. Their conditions often involve more than a single incision site, or vertebrae needing attention, and incisions likely will be 4 to 6 inches (10.16 to 15.24 centimeters) long. A hospital stay of about a week and a long healing time of a month to a year or more will follow.

So how does laser spine surgery tweak the spine, and does it ease the pain? We'll cut into that, next.

How does laser spine surgery work? 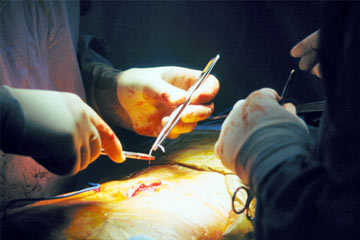 Traditional spinal surgery involves scalpels, or other precision cutting tools, and often entails opening up the back with a wide or long incision.
Dorothy Riess, MD/Getty Images

Traditional spine surgery involves scalpels, or other precision cutting tools, and often entails opening up the back with a wide or long incision. Muscle tissues are pulled aside so surgeons can get a good look at the problem and repair it.

Laser surgery, on the other hand, involves an incision of less than an inch to a couple of inches, which lessens the amount of displaced and severed tissue needing healing. This smaller incision will produce a smaller scar, but it also limits the view of the entire area around the spine, which some surgeons consider a necessity in traditional surgery. A larger cut provides a look at the entire working section of the spine.

Often, laser surgery is confused as a minimally invasive surgery, but minimally invasive surgery most often involves a small incision, a tiny endoscope with a camera for viewing inside the body and traditional surgical techniques without lasers. Doctors at the University of Chicago Medical Center, for example, perform minimally invasive spinal surgery using endoscopic cameras and 3-D imaging, which reduce the need for larger incisions and longer healing time for muscle tissue. They make tiny cuts and work from images displayed from inside the body onto TV monitors, but they do not use lasers [source: University of Chicago].

When using lasers, the surgery itself is also drastically different than traditional spinal surgery. Doctors performing laser spine surgery remove the sources of nerve sensitivity and pain by lasering off the ends and decreasing the size of the disks between vertebrae to relieve the pressure that is causing pain in a process called ablation. Laminotomy is the procedure that removes some of the "meat" of a disk, or adjacent bone spurs or growths, decompressing the disk size and reducing the amount of pressure on the spine and surrounding tissues.

These treatments are said to help with bone spurs, herniated and bulging disks, and spinal stenosis, a narrowing of the area around the spinal column that causes excess pressure [source: Armstrong]. While decompression, or laminotomy, has shown to be effective as a technique for relieving disk issues and pain, using lasers to burn, rather than cut away, disk mass has not been proven more or even equally effective in clinical trials or over time. However, traditional diskectomy and microdiskectomy, the minimally invasive surgical technique without lasers, has shown to be effective [source: UMMC].

Checking with a doctor and following up with an orthopedic or neurological specialist is advisable if back pain persists or is the result of an impact injury. Finding a laser spine clinic on your own and getting a lone consult, may not the best course of action.

We'll look at the reasons why on the next page.

We mentioned foot doctors and anesthesiologists earlier in connection with laser spine surgery because basically any kind of licensed physician, no matter how general-practice or specialized they are, can perform laser procedures on your spine. At the state level, a board of medicine investigates complaints and verifies licensing for the medical practice, but national regulators such as the U.S. Food and Drug Administration do not have oversight over types of surgeries, only the devices and medicines doctors use [sources: Aetna; Armstrong].

As highlighted in a 2011 Bloomberg.com exposé on outpatient spine clinics, medical personnel performing laser surgeries can be from any medical field, whether related to spinal treatment or not. This same investigation also questioned the high rate of laser spinal treatment malpractice claims found in public insurance records and the effectiveness of the procedures themselves [source: Armstrong].

But back pain is unquestionably agonizing and life changing and many who experience the daily discomfort search and consult with doctors and find no measure of long-term relief. And businesses that provide laser spine surgery offer hope to those who can't find help. Many people pay tens of thousands of dollars -- often out of pocket -- for outpatient surgeries that may or may not even be necessary to address their problems. Insurers have not reached a consensus in covering laser spinal procedures; some cover all but the laser portion, others cover some of the laser techniques and a number won't cover any of the costs.

And laser surgery success rates vary about as much as the insurance companies' willingness to cover it. Some patients may find initial success only to experience a regression not long after. Others may even come out of the procedure in worse shape and with new ailments or internal injuries. But there are those who find relief and walk away pain free and are more than willing to recommend the surgery.

If there is one consensus regarding laser spinal surgery, it's this: Major medical overseers are not promoting or advancing the use of lasers for necessary spine surgeries. If most chronic back pain does not require surgical treatment, as supported by the NIH, why are outpatient back surgeries proving so popular among patients?

Whether or not it's simply marketing, a quick-fix for pain or a combination of both, starting with a trusted doctor's consult or some fact-finding with a physician's teaching hospital may provide answers and alternatives worth trying before getting burned.

Marketing and search engine experts know that many people turn to the Internet for answers to medical questions and self-diagnosis. Outpatient spinal clinics of all stripes pay big money to keep their centers at the top of search results and often on the sides and borders of just about every Web site a potential patient visits. Finding testimonials from patients and business affiliates isn't hard; finding endorsements from major medical governing bodies and teaching hospitals, however, is nearly impossible. In the case of spine health and pain management, consulting with credentialed and established physicians is essential to getting the most personalized care. Top results in a search may just mean top dollar paid for advertising [source: Armstrong].