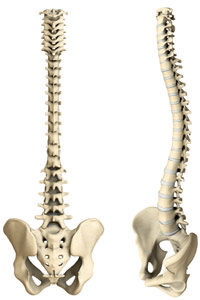 The human spine is shown here in rear and side views.
© iStockphoto.com/Raycat

In a way, your spine is the keystone that holds your body together. It's at the center of your axial skeleton -- the flexible column that holds up the center of your body. At the top of your axial skeleton is your skull, and your coccyx, or tailbone, is at the other end. Together, all these bones shelter some of the most important organs in your body. Your brain sits in its protective skull casing, and the organs in your chest are protected by 12 pairs of ribs, all of which attach directly to your spine.

Arms and legs aren't the only parts of your body that move around, though -- your axial skeleton is also flexible. Discs provide lubrication between each of the 26 bones in your spine. As long as your discs are healthy, your vertebrae don't grind together when you bend and twist. Muscles attach to protrusions on the vertebrae called processes. When the muscles contract, they pull on these leverlike surfaces, and your vertebrae move.

Since your spine has a lot of responsibility, it's not surprising that it has to develop in exactly the right way in order for the whole system to work. So where does it come from, and what can go wrong as it grows?

If you've read How Pregnancy Works, you already know about how a baby develops in a woman's body. A man's sperm joins with a woman's egg, creating a one-celled zygote. That one cell divides into two, which divide into four, over and over until there are about 100 cells. At this point, a few days after conception, the zygote becomes a blastocyst, and that's when the earliest beginnings of spinal development start to happen.

A blastocyst starts off as a collection of similar cells, but it doesn't stay that way for long. It develops three cell layers, called germ layers, in a process called gastrulation. The layers are the ectoderm, mesoderm and endoderm. Most of the body's innermost organs are formed from the endoderm, while most of the external features, like skin and hair, come from the ectoderm. The spine, part of the middle of the body, comes from the mesoderm. These layers are distinct within 12 days of the egg's fertilization.

The road from undifferentiated cells to a whole body is complex, so here's a rundown of what happens just in terms of the spine:

In order for the spine to grow correctly, everything has to happen without a hitch, from migration of the blastocyst's layers to ossification. If the spinal column doesn't close correctly, the result can be one of a number of birth defects. Among the most common are neural tube defects, which include spina bifida and anencephaly, or a lack of brain development. Getting enough folate and folic acid during the earliest days of pregnancy reduces the risk of these defects.

You can learn more about the human body and related topics by following the links on the next page.

Curves from One to Four

A fetus's spine looks much different from an adult's spine. While in the womb, a fetus's spine has one C-shaped curve. Once the baby is born and starts walking, the spine settles into four curves that hold the body up while distributing weight.

Why is sitting in a chair for long periods bad for your back?
How Pregnancy Works
Laser Spine Surgery

A Human's Sense of Smell Is Actually as Good as a Dog's
Why Chugging a Gallon of Milk Is Nearly Impossible
When you smell poop are you actually inhaling poop molecules?