Effects of Hallucinogens: Are But My Problems Merely Cartoons? 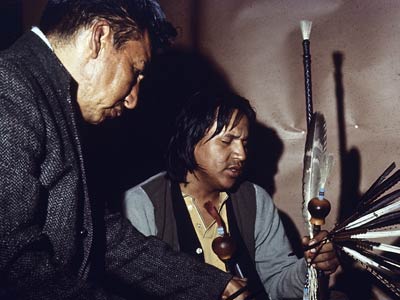 Hallucinogens have played a starring role in the lives of writers, artists, visionaries, escapists, spiritualists, the curious and the bored for thousands of years. Cultures around the world have used (and, in some cases, still use) natural hallucinogens such as peyote as revered sacraments of their religious lives.

In Western cultures, discovery of hallucinogens has more often than not taken place in the laboratory and not in the jungle or temple. As was the case with the Spanish dismissing Aztec accounts of magical mushrooms, anecdotal evidence is often ignored until Western science studies the hallucinogen under its own terms.

Initially, it seems almost counterintuitive that any sort of rational, methodical approach could be applied to an experience as unusual as tripping. But it's precisely the mysterious and mystical nature of hallucinogens such as mescaline (found in peyote), psilocybin (magic mushrooms) and MDMA (also known as the drug ecstasy) that require a rigorous set of controls and standards to determine just what the heck is happening when someone is under their influence.

Hallucinogens affect the user by altering serotonin levels in the brain. Serotonin is a hormone that helps nerve cells communicate with each other. It also has a direct effect on mood and a person's perception and sense of well-being. Researchers have discovered that depression, OCD and other mood disorders can be alleviated by changing serotonin levels through the use of antidepressants that block serotonin receptors in the brain.

Of course, hallucinogens pack more of a punch, but so far, nobody really knows how or why they create the changes in perception that occur. It's also unclear how -- or indeed if -- serotonin levels actually cause depression. Serotonin may be responsible for the regeneration of new brain cells, and it's surmised that stress inhibits serotonin production, blocking signaling between brain cells or even blocking production of new brain cells, adversely affecting mood. Of course, this is almost entirely theoretical, though there has been a positive link shown between the use of serotonin-boosting drugs and the diminishing of symptoms in those termed clinically depressed [source: WebMD].

As part of a study at John Hopkins School of Medicine, psilocybin was given to emotionally stable individuals who had never taken hallucinogens before. More than a year later, a majority of the subjects, ages 24 to 64, said the experience was one of the most meaningful and spiritual experiences of their entire lives. You can't say that for too many research projects.

So, if people who are mentally sound might possibly benefit on different psychological levels from hallucinogens, what about those who struggle with various forms of mental illness?

­First off, hallucinogens have a sound anecdotal history of exacerbating pre-existing or latent psychological problems. Brian Wilson, the gifted songwriter of the Beach Boys, experimented with LSD and now points to it as a trigger for the decades of mental anguish that followed. Syd Barrett, guitar player and a founding member of Pink Floyd, was also a heavy user of LSD who suffered a mental breakdown and seemingly never recovered. While LSD use preceded the onset of mental illness for these individuals, psychiatrists believe the drug doesn't directly cause mental illness, but rather causes latent mental illness to present itself symptomatically.

Hallucinogens might throw you for more of a loop than you bargained for. But for those already out on the loop, can hallucinogens bring them back? Keep reading to find out.