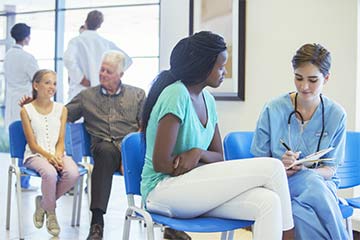 A triage nurse talks with a patient in a waiting room. After finding out the symptoms, the nurse determines how immediately the patient must be seen.
Caiaimage/Robert Daly/Getty Images

Unless you've been blessed with supernaturally healthy genes (Captain America, I'm looking at you), you've probably experienced the triage process at least a couple of times. Those of us who ail, hurt and heal require medical evaluation from time to time, and a quick once-over by the triage nurse is typically part of the experience. The term triage is traced to the French word "trier," which means "to sort" [sources: Robertson-Steel]. This moniker is appropriate because sorting is exactly what's going on during triage, whether you realize it or not.

"The triage process sorts patients in a manner that ranks them by level of acuity," explains Scott Batchelor, M.D., M.P.H, a pediatric emergency medicine physician at Children's Healthcare of Atlanta at Scottish Rite. This ranking process allows hospitals to prioritize patients based on severity of illness or injury, with the intent of treating the sickest first. So if you show up in the emergency room with a broken toe or other non-life-threatening problem, you can pretty much be guaranteed to get bumped down the list by incoming patients with more pressing concerns.

While the idea of medical triage might sound like common sense, someone had to create it. The concept was implemented in 1792 by Baron Dominique-Jean Larrey, who served as surgeon in chief to Napoleon's Imperial Guard [source: Robertson-Steel]. The advancing state of modern warfare had begun to produce great numbers of injuries and casualties, emphasizing the need for more efficient caregiving to wounded soldiers on the battlefield. Rather than forcing soldiers to wait hours or for the end of fighting for the day for treatment as they had before, doctors began evaluating injured men on the spot. Larrey's formula for sorting soldiers was based solely on severity of injuries, with the most desperately wounded placed ahead of those who could wait, albeit uncomfortably [source: Iverson and Moskop].

British naval surgeon John Wilson further evolved the process in 1846 by focusing attention first on patients who could be successfully treated, rather than spending precious time and scarce resources on mortally wounded soldiers [source: Iverson and Moskop].

During World War I, the triage formula was tweaked yet again, with the emphasis being on treating the most people one could in the shortest time. As a military surgical manual of the time put it, "A single case, even if it urgently requires attention ... may have to wait, for in that same time a dozen others, almost equally exigent, but requiring less time, might be cared for."

As you can see, there are several ways to triage patients. Next, we'll look at how modern hospitals make these decisions.

What to Expect During Triage

Triage differs based on the scenario you're in (battlefield, mass casualty incident, regular emergency room), but most of the time it's pretty predictable. Upon arrival in the emergency room (ER) or other urgent care setting, patients are directed to the triage nurse, who greets them and does a quick visual assessment, which is a huge part of the process. If the patient appears really ill, struggles to breathe or is unresponsive he or she will be seen more quickly by a doctor than those who are uncomfortable, but otherwise all right. Triage is also the time for the nurse to obtain necessary patient information, such as the general complaint, medical history, allergies and current medications. Basic vitals also will be collected, including temperature and blood pressure [source: Sacred Heart Healthcare System].

After all of these details are gathered, which generally takes only a few minutes, the nurse will assign a score or code to the patient. The method for this differs between hospitals, but is often a color or number-based system; Dr. Batchelor's team at Children's uses both (see sidebar). The coding system isn't necessarily static, however. A patient's level can change as they go through the process, depending on how their symptoms progress.

It's important to understand that other factors can influence how a patient is sorted. Very young children and people with a history of chronic illness, cancer and other serious issues are at greater risk for complications, so they're often put at the head of the acute care line. That's not to say that people with less urgent issues are absolutely doomed to wait hours upon hours for care. Many urgent care settings feature two "tracks" for patients – one for those who are in severe distress and another for people who can be quickly and efficiently treated, such as those dealing with minor cuts, injuries or treatable illnesses [source: Sacred Heart Healthcare System]. So even though your injury or illness isn't terribly severe, you still have the potential to be seen just as quickly as those who are in bad shape, just by a different team.

Once the triage assessment is made and the code is assigned, the emergency department uses the information to send patients back to the doctors for diagnosis, treatment and possible code change. "It's not the nurse's job to diagnose, but to see, assess and sort," says Batchelor.

You've probably watched a medical TV drama, and heard a nurse shout, "We have a code blue!" That means they have a patient who needs immediate attention. Code blue/one indicates major injury or other extreme distress. (Some hospitals use a number system instead of colors.) Patients in the red/two category are still very sick and require immediate attention, but aren't as poorly off as the blue/ones. Most patients fall in the mid-level orange/three range. Gray/four patients are moderately sick, typically with an illness like a severe cold or sinus infection. The least urgent category is green/five, which features patients who are dealing with an issue that doesn't require ER attention.

Most of us will only experience standard doctor's office or emergency room triage, but the process does adapt to suit a range of other scenarios. As you already know, triage was originally developed for use on battlefields. Tactical Combat Casualty Care methodology uses two major indicators (pulse and mental status determined by a score on the Glasgow Coma Scale) to assign a field triage score (FTS) to help physicians decide which soldiers to treat, and when. Basically, a weak or absent pulse and greatly altered mental state are both predictive of whether or not a person can survive injury, whether they receive immediate care, or not. It might sound harsh, but a 2010 study found that these basic assessments are effective at estimating casualties and helping to assign limited resources to people who can benefit from treatment [source: Eastridge, BJ et al.]. This military-inspired methodology also is used in other emergency triage situations, particularly disasters or other mass casualty events.

Triage in the event of an explosion, major accident or other disaster situation is greatly abbreviated from what patients experience in the doctor's office, and is done by any medical professional working the site. "You have to get them done quickly," says Dr. Batchelor. "Look at the patient, assess them briefly and determine if something needs to be done up front, or can wait a bit." This rapid-fire process is usually accompanied by the use of colored tags and numbers written on the patient to make them easier to spot and assist accordingly.

Trauma triage occurs in a disaster scenario or at the site of a smaller accident, and is typically done several times to keep tabs on the patients' evolving state (when help arrives, before transport to the hospital and upon arrival at the hospital). Several major body functions and other factors are evaluated quickly to assess and classify each patient according to severity. For instance, let's say the doctor examines the patient. Is he breathing? (If the answer is "no," he might be dead, which means no further treatment – important to determine when resources are limited.) If the answer is "yes," what is the respiratory rate? And then, what is the pulse rate? Depending on the answers, the patient might be assigned for immediate treatment; for intervention between the next two to four hours; or perhaps for delayed care [source: Tidy].

Nurse advice lines are sometimes referred to as triage, but do they really qualify? "Without vital signs and actually looking at the patient I don't think it's an official triage," says Dr. Batchelor. "For a true triage you need to lay eyes on the person and assign a code."

Pros, Cons and Future of Triage 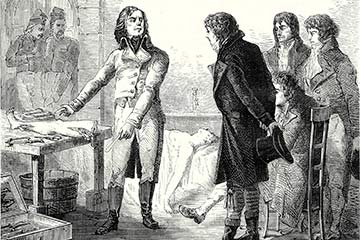 Dominique-Jean Larrey was surgeon in chief in Napoleon's army and invented the idea of triage. He also created "flying ambulances" to immediately transport the wounded to base hospitals nearby.
Liszt Collection/Heritage Images/Getty Images

The concept of triage is definitely a worthwhile one – help the people who need it the most, while also managing the flow of patients in and out of the emergency department or other triage situation. "From the provider standpoint it gives us a way to see the sicker kids first," says Dr. Batchelor of Children's Healthcare of Atlanta at Scottish Rite. "They need more attention, more time, more tests and more intervention."

By the same token, though, triage can inadvertently upset less critical patients. "Some parents don't understand the process, so they see a kid come in after theirs and get taken back sooner, not realizing that the kid is much sicker," Batchelor explains. "Parents get upset about that." Sometimes, patients in an overcrowded setting who are classified as "less urgent" wind up with lengthy wait times, causing them to become disenchanted and even leave without being seen. Other critics of triage find it unethical to delay treating patients, pointing to the possibility for rapid and unforeseen deterioration.

Many health systems address these concerns by constantly tweaking the process to reduce wait times, especially those with exceptionally high patient volumes. A study conducted at Kaiser Permanent South Sacramento Medical Center employed Lean thinking principles, a Japanese business methodology, to reduce waste and improve efficiency. For instance, under the old system, after the initial triage, the less-sick patients were sent to a separate waiting room where they waited again to be seen by a doctor. Under the new system, for minor injuries, a doctor does the examination in the waiting area or in a small room close by, rather than waiting for an open bed in the main patient area (though patients still have that option to wait for, if they wish.) Researchers found that the LWBS ("left without being seen") rate fell from 4.5 percent to 1.5 percent, and the time to be seen by a physician fell almost in half [source: Murrell et al.].

Although the core practice remains the same, the way triage is done has changed since the days of Napoleon, thanks to improvements in technology, medicine and efficiency. This trend is poised to continue because of the near-constant contributions being made by research and technology. "Telemedicine is coming out, smart phone apps and devices that take vitals will all make an impact," says Batchelor. Napoleon and his chief surgeon may have been visionaries in their own ways, but I doubt either of them could have ever seen that coming!

I've been through triage and undergone it with my kids. Every time it's a quick and painless experience. Anything we can do to help medical facilities run more efficiently is just fine in my book!

How do emergency rooms handle massive disasters?
10 Tips to Get You Through a Trip to the ER
What Happens When Your Insurance Says Your ER Visit Was 'Avoidable'?