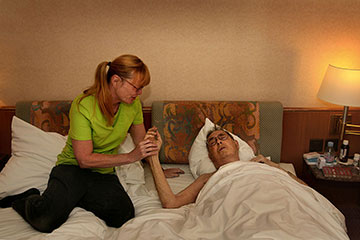 Dr. John Elliott of Sydney, Australia, holds the hand of his wife, Anjelika, as he attempts to rise from his hotel room bed in Zurich, 26 hours before he ended his life through physician-assisted suicide, in 2007.
Fairfax Media/Fairfax Media via Getty Images

In 2014, Brittany Maynard was a vibrant 29-year-old trying to start a family with her new husband when debilitating pain began gripping her head like a vise. The diagnosis: brain cancer. Despite two surgeries to stop the tumor's growth, it roared back more aggressively than ever, and she was soon given a mere six months to live. Faced with a treatment plan of full-brain radiation, which wouldn't cure her yet would burn her scalp, and possibly developing morphine-resistant pain, personality changes and cognitive losses, she opted for medically assisted suicide.

To achieve the death she wanted, Maynard had to relocate from California to Oregon, one of the few states that allows medically assisted suicide. During her final weeks of life, Maynard created a six-minute video about dying with dignity that ignited passions in the U.S. She died as she wished, after taking a lethal dose of sedatives and respiratory system depressants provided by her physician, on Nov. 1, 2014. Less than a year later, thanks to her video and activism, her home state of California passed aid-in-dying legislation. In addition, death-with-dignity legislation was rapidly introduced in half of the states [source: The Brittany Maynard Fund].

The notion of medically assisted death is hardly a new one. It's been around since ancient times, and goes by various names — medically assisted suicide, physician-assisted dying and euthanasia, although as just noted, the latter is not an accurate term.

Yet despite its longevity, it's been largely spurned around the globe in the modern era. It wasn't until 1940 that Switzerland approved the practice, and nothing much happened after that for decades. More recently, the practice got some traction when Colombia approved physician-assisted death in 1997, followed by the Netherlands and Belgium in 2002, Luxembourg in 2009, England and Wales in 2010 (via a prosecution policy statement) and Canada in 2016 [sources: Assisted Suicide, BBC].

Thanks partly to Maynard, a 2015 Gallup poll showed 68 percent of Americans support the practice, a 10 percent increase from the prior year [source: Dugan]. Yet there's always a bit of unease around legalization — the percentage of Americans who support actual legalization dips to about 50 — as some fear the practice could be abused [source: Quill and Greenlaw].

Let's look at what, exactly, is involved in physician-assisted death.

The History of Medically Assisted Suicide

It may seem as though humankind has always opposed medically assisted suicide, but that's actually not true. In ancient Greece and Rome, there was a fair amount of support for voluntary (and involuntary) "mercy killings," particularly to avoid lengthy, painful deaths. Physicians often performed abortions and even infanticide, taking the lives of, say, babies born severely disabled.

Although the physicians' famed Hippocratic Oath came into prominence in the 6th century B.C.E. — part of which says, "I will neither give a deadly drug to anybody who asked for it, nor will I make a suggestion to this effect. Similarly I will not give to a woman an abortive remedy" — few doctors of that era followed it to the letter [sources: ProCon, Tyson].

The grave taboo associated with medically assisted death took root with the rise of Christianity and Judaism, which preached that life is a gift from God, and only he can take it away. By the Middle Ages, people around the globe were nearly united in their stance against the practice [source: ProCon].

It wasn't until the early 20th century that Americans began rethinking the issue. Or at least a few of them. Anna S. Hall, a feminist, campaigned in Ohio for physician-assisted deaths for terminally ill people after her mother suffered greatly before succumbing to liver cancer. And Charlotte Perkins Gilman, having grappled for three years with breast cancer, killed herself in 1935, writing in her suicide note: "When one is assured of unavoidable and imminent death, it is the simplest of human rights to choose a quick and easy death in place of a slow and horrible one" [source: Kitzinger].

Nothing really changed until 1994, however, when Oregon became the first state to approve an assisted-suicide law. The law went into effect in 1997, after surviving a court challenge. Since then, the practice has very slowly been gaining acceptance. By early 2016, physician-assisted suicide was legal in five states. As an issue reserved for the states to decide, each state's laws differ, although generally all stipulate patients must have less than six months to live, be residents of the state, obtain a prescription only from a licensed physician approved by that state. In 2016,another two dozen or so states plus Washington, D.C., were considering similar death-with-dignity legislation [sources: CNN, Lovett].

While physicians have long balked at helping their patients snuff out their lives, no matter the circumstances, a 2014 Medscape survey of more than 21,000 U.S. and European doctors showed that for the first time in the modern era, the majority of physicians — 54 percent — favor physician-assisted suicide [source: Kane].

Of course, this is an issue with pros and cons, which we'll explore on the next page.

In the early part of the 20th century, support for euthanasia was growing in the U.S. (In this case, it meant allowing a doctor to decide whether to kill an infant with severe deformities or at least not perform any surgery on him). But during World War II, news broke that Adolf Hitler used involuntary euthanasia on people he considered mentally defective. Support for euthanasia promptly declined [source: ProCon].

Since Gallup began tracking moral issues in 2001, the polling company has found physician-assisted death to be one of the more divisive issues [source: Dugan]. Many, if not most, of the people who oppose the practice do so for religious or cultural reasons. But there are several additional arguments regularly put forth as to why this practice should, or should not, be allowed.

The main argument in favor of allowing medically assisted suicide is one of individual rights. A person of sound mind who is terminally ill and wishes to avoid potential excruciating pain, loss of bodily functions and/or loss of mind should be allowed to die with dignity, proponents say, and in a setting of his choice. It's part of one's basic liberties as a human being.

Furthermore, society already allows a person's "passive" death; you can elect to refuse, say, dialysis, feeding tubes, ventilators and other lifesaving measures. And you can ask not to be resuscitated. It's an open secret that many doctors will inject a lethal dose of morphine in patients, under the guise of pain relief [sources: Breslow,Quill and Greenlaw].

Those who argue against legalizing medically assisted death say the practice could easily be abused. Low-income and underinsured patients, for one, might be pressured by cash-strapped family members to swallow some pills and end their lives if continuing treatment is a much pricier option. Or governmental savings could come into play; drugs to assist in suicide are much cheaper than medical care to keep someone alive [sources: ProCon, Lovett].

Another con: Having such a law on the books could make it easier for disabled people to inadvertently kill themselves. For example, a severely disabled person who is having a bad day, some say, might be able to easily persuade her physician she wants to end her suffering and be given lethal medication, when all she really needs is a hug and a caring conversation. An able-bodied person who is in a funk, on the other hand, would never be given such a prescription. Some disability-rights advocates argue that limiting physician-assisted suicide just to people with severe disabilities or incurable conditions seems to imply that their quality of life is inherently less valuable than someone who is able-bodied or disease-free [source: Breslow].

In the end, some argue, doctors are simply not supposed to kill their patients(even though "do no harm" is not part of the Hippocratic Oath, as many people think).

In addition to the issue of medically assisted suicide, there is the somewhat less controversial issue of the right to not prolong life. This means refusing treatments, like surgeries or chemotherapy, or refusing to be kept alive by feeding tubes or artificial respiration machines. Several court cases (like ones involving Karen Ann Quinlan and Terri Schiavo) have said that relatives have the right to remove these apparatuses from relatives in persistent vegetative states. Many people have written "living wills" that let relatives and physicians know what their wishes are regarding end-of-life care [source: ProCon].

Who Was Jack Kevorkian? 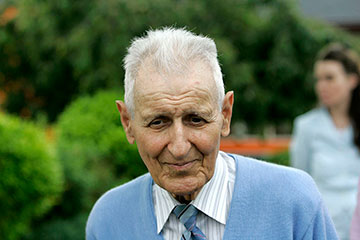 Until Brittany Maynard, probably the person most responsible for bringing the issue of end-of-life choices to the forefront of American minds was Dr. Jack Kervorkian.

His nickname was Dr. Death. The moniker was bestowed upon him in 1958, after he proposed death-row inmates be used for medical experiments. The project would work like this: Death-row subjects could volunteer for painless medical experiments, which would be performed while they were alive, but would ultimately kill them. This would save research money, plus offer insights into the brains of the psychotic. The project was turned down [source: Biography].

He had a fascination with death from an early age. Murad "Jack" Kevorkian was born in Michigan in 1928 to Armenian refugees. A smart kid, he graduated with honors from high school at the age of 17, after teaching himself German and Japanese. Eventually he became a pathologist. As a resident he would photograph terminally ill patients trying to pinpoint what they looked like at the exact moment of their deaths. After bouncing around various medical positions for much of his career, he found himself in his mid-50s, alone, living meagerly off of Social Security and sometimes even sleeping in his car.

But in 1986, Kevorkian learned about Netherlands physicians who were assisting people in hastening their deaths. The method? Lethal injections. Still absorbed with his own idea about death-row prisoner experimentation, Kevorkian seized on this assisted suicide notion and began championing the cause. Soon he created the "Thanatron," a suicide machine whereby a suffering person could administer to himself a saline solution, then a painkiller and finally a fatal dose of potassium chloride. In 1990, Kevorkian helped a woman with Alzheimer's kill herself with the Thanatron; he hooked her up to it, and she administered the painkiller and poison herself [source: Biography].

Over the next decade Kevorkian helped more than 130 people kill themselves. He was prosecuted four times and acquitted three —one case ended in a mistrial. But after he allowed the CBS news program "60 Minutes" to air a tape of him administering a lethal injection to an ALS patient, Kevorkian ended up in prison. Convicted of second-degree murder and illegally delivering a controlled substance, Kevorkian served eight years of his 25-year sentence. He was released in 2007 for good behavior — and after promising not to help anyone else kill themselves. He died in 2011 at age 83 [sources: Biography, Krupa].

Thankfully, I have never had a loved one suffer greatly for weeks or months or years before dying in agony. So it's a bit difficult to try and imagine the kind of suffering that would drive one to consider ending his life early. On the other hand, I read about some pretty compelling cases while researching this story. And while I haven't signed any "do not resuscitate" materials, my family knows that if I were to fall into an irreversible coma or vegetative state, I wouldn't want to be kept alive by a ventilator or feeding tube.

I can see why this issue is so divisive, and fraught with emotion. And while it would be easy not to think about it, it's a subject our society should address.