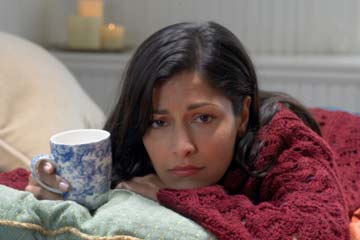 Clinical depression can strike for any number of reasons. But can it be completely cured? See more emotion pictures.
Andrea Morini/Photodisc/Thinkstock

If you suffered a mental illness in the 1940s, you had some pretty grim options. And because of the enormous influx of mentally ill patients following World War II, most of the treatments available were quick and dirty. For many patients, there was the prefrontal ("ice pick") lobotomy or electroconvulsive therapy. While the latter is still sometimes used today for extreme cases of depression, lobotomies were thankfully phased out as more effective (and decidedly less gruesome) treatments developed in the 1950s.

Today, depression affects about 121 million people around the world; less than 25 percent of them have access to proper care [source: World Health Organization]. But for this article, let's focus on people with access to treatment who suffer from what's arguably the most serious form of depression: clinical depression or major depression. Most of them are treated with antidepressants, counseling or some combination thereof. (Many leading experts often recommend a type of counseling known as of cognitive behavioral therapy, but most patients are simply given antidepressants.) If the patient's depression elevates to more critical levels, procedures such as electroconvulsive therapy, vagus nerve stimulation, deep brain stimulation and transcranial magnetic stimulation sometimes become treatment options.

But clinical depression is a tricky beast. Anyone can have a bad week and feel bummed out for a bit, but major depression is a chronic psychological illness that involves debilitating symptoms. You're probably familiar with most symptoms from television commercials for depression medications: lethargy and listlessness, loss of concentration, lack of interest in daily activities, feelings of deep sadness and emptiness, persistent sleeping problems, considerable weight loss or gain, and suicidal tendencies. Other issues include irritability and frustration over simple matters, decreased sex drive, serious anxiety and agitation, unexplainable crying jags and feelings of worthlessness or self-recrimination.

That's a lot of symptoms to account for, and it's unlikely an easy miracle cure that works for everyone will ever be found. In every case of clinical depression, there are typically many interlocking facets at work: everything from genetics, hormones and biological disturbances to traumas, major illnesses and other troubling life events. Because any of these can trigger and fuel a bout of major depression, treatments must often be customized on a patient-by-patient basis.

That's not to say that some people aren't cured of depression; they are. But many are not. Whether they don't seek care to begin with, or the care they receive isn't sufficient, unless a case of depression is dealt with thoroughly, it's very likely the condition will continue or the person will relapse at some point in the future [source: Psychology Today].

Even if most of the symptoms of depression have cleared up, low-lying issues can indicate trouble down the line. Experts recommend that treatments continue well beyond the point when a person simply starts to feel a bit better, and up to the time when he or she is able to fully resume an active, productive and healthy lifestyle.

Since the brain of a person who's suffered from clinical depression often becomes altered, the treatment time needs to be long enough for it to fully right itself. Without this extended treatment, relapse becomes increasingly likely. In fact, more than 50 percent of people with depression suffer a relapse, and the more often they relapse, the more likely they'll continue to do so. Physicians and patients need to focus on how individuals feel during and after bouts of depression, because even negative thoughts can bring someone who was "cured" right back into the fray [source: Centre for Addiction and Mental Health].

Depression Overview
What is the link between depression and anger?
What is atypical depression?