Hand Sniffing After Hand Shaking Is a Thing

Browse the article Hand Sniffing After Hand Shaking Is a Thing 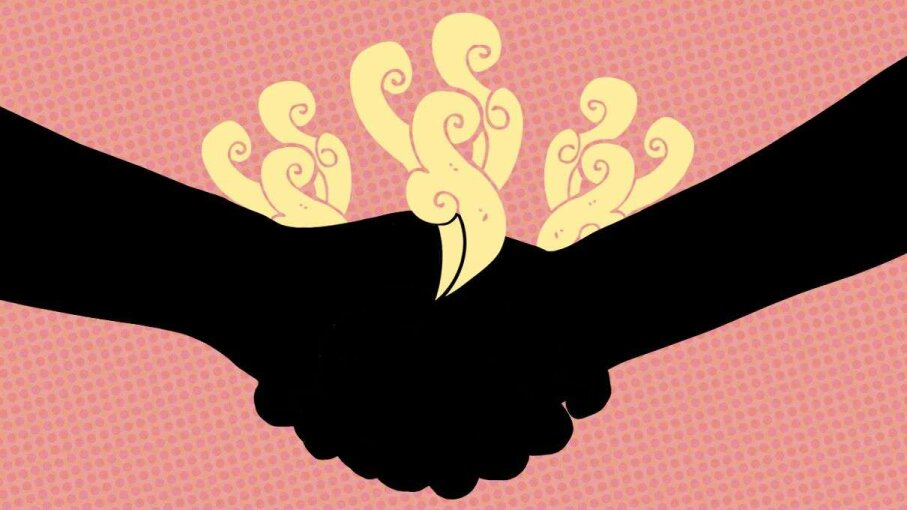 You know you're going to think about this study the next time you shake someone's hand. Lineartestpilot/Thinkstock/ HowStuffWorks

In many animals, smell is a kind of speech. Emitting a smell. Receiving it. It's birds and bees kind of stuff. Fish and rodents, too.

But in humans ... well, that's not always been as clear. So-called "chemosignaling" through a chemical substance called a pheromone is a subject of some debate.

Which brings us to a study by Israel's Weizmann Institute of Science that indicates humans indeed use their sniffers to check out each other, notably during a little-studied part of an age-old social custom: shaking hands.

The study looked at 271 subjects and their actions after various structured events in which the some participants shook hands and some didn't. The researchers found that sniffing your hands is kind of a normal thing. And sniffing your hands after greeting others with a handshake is prevalent, with a certain pattern.

Let's hear from the digest on eLife.org, where the study was published in 2015:

Which brings up the basic question of the study: Uh ... why?

"Rodents, dogs and other mammals commonly sniff themselves, and they sniff one another in social interactions, and it seems that in the course of evolution, humans have retained this practice — only on a subliminal level," Idan Frumin, one of the study's lead authors, says in a Weizmann Institute press release.

Passing along smells among members of your species is widely accepted. Fathead minnows do it through their urine to mark their territory. Ants and elephants and deer and bees all use receptors to "smell" the chemical makeup of members of their species.

It's widely accepted — unless you're a human, that is. Then, it gets all sketchy. In a landmark 2010 study, "The Great Pheromone Myth," Richard L. Doty, the director of the Smell and Taste Center at the University of Pennsylvania Medical Center, shoots down the idea of a single chemical substance — pheromones — that passes on messages from human to human.

One of the problems is the definition of "pheromone." Many exist, but for a general one, we have this from biology-online: "Chemical substances which, when secreted by an individual into the environment, cause specific reactions in other individuals, usually of the same species. The substances relate only to multicellular organisms."

Some definitions, though, are stricter and more demanding. For example, writing in his book "Neurobiology of Chemical Communication," Doty says no chemical or combination of them like that exists in humans: "Most definitions imply that a pheromone (a) is comprised of one or only a few chemicals, (b) is species-specific, (c) has well-defined behavioral or endocrine effects, and (d) is little influenced by learning. To date, no chemicals have been isolated in humans that meet such criteria."

So does that mean all this hand-sniffing post-handshake is bunk? Or that the research — another Weizmann Institute study — that suggests that human tears contain a "chemosignal" is nonsense?

Not exactly. We know cues such as fragrances can affect people's moods; the problem lies in pinpointing the specific agents (pheromones) that produce those effects.

So it seems as though scientists and hand-shakers everywhere will continue to sniff around, looking to uncover that secret speech in our smells.