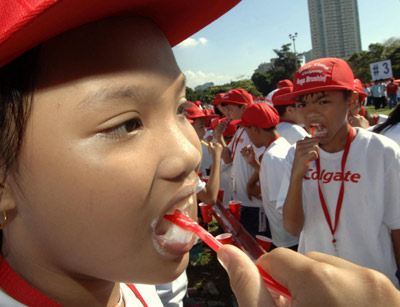 Kids in the Philippines take part in a 2006 attempt to break the world record for most number of people brushing teeth simultaneously for three minutes. As long as they don't go for the most people drinking orange juice immediately afterward, they should be fine. See more personal hygiene pictures.
Joel Nito/AFP/Getty Images

We humans have clearly identified tastes that go great together. The combination of chocolate and peanut butter comes to mind, as does peanut butter and jelly. For many, steak and eggs is a winning combination. Or strawberries and cream. But anyone who has ever taken a gulp of orange juice immediately after brushing his or her teeth knows that the ensuing taste may be the worst a person can possibly experience.

While the minty flavor of toothpaste is pleasant, and orange juice has a nice, sweet citrus taste, the two combined form a new hybrid that resembles neither, and is universally considered disgusting. But why?

In actuality, scientists don't know for sure why orange juice and toothpaste go so poorly together. This is mostly due to the fact that scientists aren't entirely certain how taste works. Like smell, full understanding of this sense remains elusive. Still, we have a pretty good idea of what takes place in the process of taste, and based on current observation, researchers have come to a general consensus as to what creates the horrific O.J./toothpaste combo.

The tastes your mouth can perceive are divided into five general categories: sweet, salty, bitter, sour and umami (meaty tastes). While each is separate, they all work together to produce different flavors. Flavor is not the same as taste. In fact, taste is an aspect of flavor, along with temperature, consistency, smell and texture. Each of these factors has an effect on our perception of taste. For example, foods taste sweeter when they're warmer than they do when they're colder.

So what's at the root of the problem? Read on to find out about the chemical reaction scientists feel is responsible for the battle between orange juice and toothpaste.

Currently, scientists believe that flavors are the result of interactions between taste molecules and receptors on your tongue. Molecules of a certain shape will interact with receptors that are shaped to accept them. But these receptors can be manipulated, which is probably the best explanation for why orange juice and toothpaste taste gross together.

The likeliest culprit for the offensive reaction is the foaming agent found in almost all toothpastes. Sodium lauryl sulfate (SLS) is a surfactant -- a sudser -- added to toothpaste. It creates the froth that toothpaste becomes after you begin brushing by lowering the surface tension of the saliva in your mouth and allowing bubbles to form. While it aids in spreading the toothpaste throughout your mouth, it also creates the impression of cleanliness; a mouthful of foam just feels cleaner.

But SLS has other properties, too. For one, it suppresses your sweet receptors, so it has a dampening effect on the generally sweet taste of orange juice. In addition, SLS destroys phospholipids. These fatty compounds act as inhibitors on your bitter receptors. So by inhibiting sweet receptors and destroying phospholipids, SLS dulls the sweetness and promotes the bitter taste in orange juice.

This is not the only explanation of why orange juice and toothpaste form a bad flavor, but it's the most widely accepted one. Another explanation, posed by a researcher at the United States Department of Energy, suggests that the horrible taste is the result of interaction between the stannous fluoride in toothpaste and the acetic acid in orange juice.

While research into the science of taste is as intense as minty toothpaste, investigations into the orange juice/toothpaste interaction are actually fairly sparse. The authors of one study, published in the Journal of Sensory Studies in 2005, concluded that it takes at least an hour for the effects of minty toothpaste on the taste of orange juice to dissipate [source: Allison, Chambers].

But this study examined the effects of only "strongly mentholated toothpaste." So is the same bad taste created with toothpastes that don't contain a minty flavor? Any toothpaste with SLS will create the bad taste, says University of California - Davis sensory scientist Dr. Hildegarde Heymann And don't forget, SLS is present in just about every brand of toothpaste. Dr. Heymann should know, she's worked as a flavor scientist in the toothpaste industry. Of course, you don't need a Ph.D. to figure this out. The simple misstep of taking a sip of O.J. after brushing your teeth is experiment enough.

For more information on taste, chemistry and related topics, visit the next page.

Flavors Around the World

The preference for mint-flavored toothpaste was originally an American phenomenon. Throughout the world you can find a wide variety of flavors. In the Philippines, Close Up produces chocolate toothpaste. Japanese company Breath Palette produces 32 flavors of toothpaste, including Indian Curry and Pumpkin Pudding. Chinese brushers can get cherry- or pear-flavored toothpaste. Spanish children can get strawberry-flavored Snoopy toothpaste. And in the U.S., flavors like bubblegum and orange now mingle with minty toothpastes on store shelves.