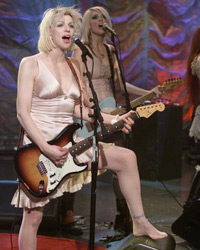 Courtney Love. She's passionate, she's talented and she's outspoken. She lives a life so unlike the rest of us that it's difficult to pinpoint one particular meltdown. Where to begin? Her public and chronic substance abuse while married to Kurt Cobain? Her 1995 crash of a post-MTV Video Music Awards show interview Kurt Loder was conducting with Madonna? Her bizarre on (and off) stage antics? Her desire to snort her late husband's ashes?

She's fought drug addiction -- heroin, cocaine and prescription drugs -- as well as drug charges in court, and she's been in and out of rehab. She's fought for feminist ideals, stricter gun control laws and gay rights. Whatever else can be said about her, Courtney love is a fighter.

Courtney admits to being eccentric on her blog, but scorns those who label her with various mental illnesses.Whether it's what she says and does during interviews or during her on-stage performances, or what she posts on her Twitter feed or Facebook page, Courtney can't be tamed.