Is hoarding an inheritable disease?

Can hoarding behavior be inherited? Find out.
DCL

The question of genetics is a common one in any discussion of mental health. Problems like depression, obsessive-compulsive disorder, bipolar disorder and so many others appear to be strongly linked to inheritance, with close relatives often suffering from similar illnesses.

Compulsive hoarding, or the uncontrollable desire to collect and hold onto objects to the extent that they interfere with daily life, is a relatively newly recognized disorder, and studies into its pathogenesis are just starting to pick up. As with so many mental illnesses, the roots of hoarding disorder are controversial, and whether or not the behavior can be inherited is a question with significant implications for those who suffer from it, those close to it, and those who treat it.

So, is it genetic? Can you inherit compulsive hoarding disorder from a parent? The answer is, you guessed it, complicated, and it starts with an understanding of the difference between genetic certainty and genetic tendency. 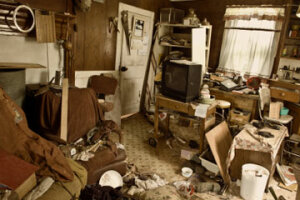 Hoarding Signs and How to Get Help

5 Ways to Help a Hoarder