What exactly is amnesia? 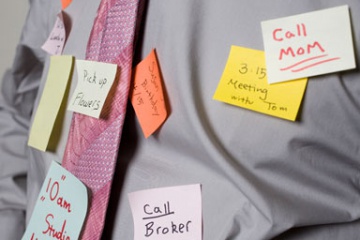 Sometimes the memory loss associated with amnesia includes everything from a person's past, and other times just bits and pieces are missing.
Yo Oura/Riser/Getty Images

A popular subject on the big screen and television (especially the daytime variety) is a form of memory loss known as amnesia. Stedman's Medical Dictionary defines amnesia as "a disturbance in the memory of information stored in long-term memory, in contrast to short-term memory, manifested by total or partial inability to recall past experiences." Amnesia is a condition in which someone can't recall stored memories, like their mom's maiden name or what happened last Christmas, but they may recall the knock-knock joke their little brother told them a few seconds ago. This is actually an example of retrograde amnesia.

Sometimes the memory loss associated with amnesia includes everything from a person's past, and other times just bits and pieces are missing. In most cases, amnesia is a temporary condition and is very brief, lasting from a few seconds to a few hours. However, the duration can be longer depending on the severity of the disease or trauma, possibly lasting for a few weeks or even months.

There are several different types of amnesia, including:

On the next page, learn more about memory loss and how your brain makes and stores memories.

In order to understand how the loss of memory works, it's good to know how we store memories in the first place. Our brain gives us the power to think, plan, speak and imagine. It also gives us the ability to make and store memories. Physiologically speaking, a memory is the result of chemical or even structural changes in synaptic transmissions between neurons. As these changes occur, a pathway is created. This pathway is called a memory trace. Signals can travel along these memory traces through the brain.

Making and storing memories is a complex process involving many regions of the brain, including the frontal, temporal and parietal lobes. Damage or disease in these areas can result in varying degrees of memory loss. Here's a good example of how this works:

It is believed that consolidation takes place in the hippocampi, located in the temporal-lobe regions of the brain. Medical research indicates that it is the frontal and temporal lobes that are most often damaged during head injury. This is why many people who suffer severe head trauma or brain injury experience anterograde amnesia. If the hippocampi are damaged, the amnesiac will be able to recall older memories, but won't be able to make any new ones.

For more information about human memory and the brain, see the links on the next page.

How does the brain transform reality into dreams?
What is dissociative identity disorder?
Memory

How Sleep Consolidates Our Memories
Are Private or Public College Students More Stressed? Reddit May Hold the Answer
Is It Possible to Share Your Psychosis?