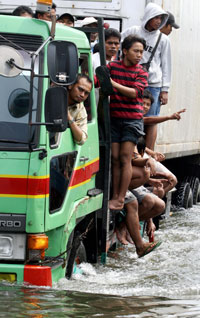 Jakarta, Indonesia residents ride a truck through a flooded street after an unusual high tide in November 2007.
Adek Berry/AFP/Getty Images

As the Earth's lone natural ­satellite, the moon and the mystery surrounding it has long been credited with causing a host of seemingly mystical occurrences. Some of these happenings are scientifically based, including the moon's indisputable effect on the Earth's ocean tides. Others, however, seem to be inspired more by a combination of folklore and fear.

For example, the full moon has been associated with the appearance of werewolves, as well as increased levels of insanity and chaos in the form of crime and accidents. These superstitions date back so far in fact, that "luna," the root of insanity-inspired words such as "lunatic" and "lunacy" is Greek for "moon." The full moon is also often blamed for some less frightening phenomena, including increased birthrates, sleepwalking and even substantial casino payouts. The question that has puzzled epileptics for years, however, is whether or not epileptic seizures are more likely to occur during a full moon.

Long before the space race ever began, scientists and ordinary people alike theorized about the full moon's impact on the Earth. Their theories resulted in sometimes legitimately concerning, but often wildly unfounded beliefs. As so many scientifically unsubstantiated theories do, these ideas snowballed over time until they were considered factual, despite a decided lack of scientific evidence.

Multiple scientific studies have found that highly educated health care professionals, police officers and mental health workers subscribe to the notion that increased levels of trauma and crime occur during full moons [source: ABC News]. One widely held full-moon-related belief involves a disorder that at one time elicited much fear from the general population -- epilepsy.

Epileptic seizures are an involuntary and largely unpredictable side effect of epilepsy, a neurological condition often caused by brain tumors or malformations, head trauma, brain lesions and other unknown factors. Epilepsy, while still very frightening to those that suffer from it, used to be much more feared and misunderstood before modern science began to make headway into understanding its causes and treatments.

It's no wonder, given society's tendency to fear the unknown, that epileptic seizures used to be associated with black magic and demonic possession, rather than legitimate medical conditions. It seems natural that this fear would morph into an association with the full moon and its "power" over the human body, leading many to question whether or not more epileptic seizures happen during full moons. Is it possible that the moon, from its distant orbit nearly 250,000 miles (402,336 km) away can exert such influence over the human mind and body? 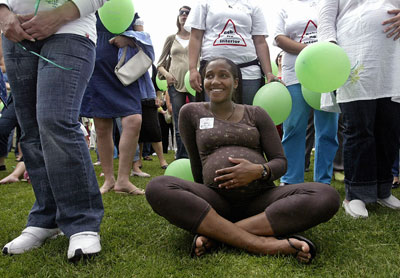 Wait for It … Procrastination Can Be a Good Thing
Screaming: Bad for the Ears, Good for the Species?
Living in Racist Community Linked to Health Issues for Blacks, Whites Alike