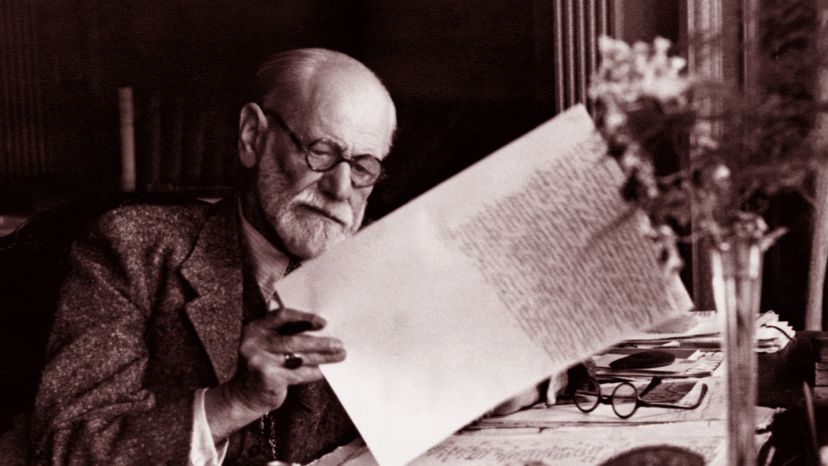 Sigmund Freud, the father of psychoanalysis, works at his desk. World History Archive/UIG via Getty images

A century or so ago, Sigmund Freud was revered as the father of psychoanalysis. The legendary neurologist was also the person who came up with the theory of the id, ego and superego; the notion of penis envy; and the idea of the Oedipus Complex, among many others. But by the late 20th century many critics viewed him almost as a charlatan, as advancing science appeared to prove most of his ideas very wrong.

Nevertheless, Freud is still considered one of the most influential giants of the 20th century, mainly because he developed the notion of the unconscious mind. Prior to that, Western thought centered around positivism, the idea that knowledge comes only through reason and logic and that we can rationally control ourselves and the world. It was Freud who said positivism was wrong — that we're actually not aware of everything we're thinking and often act on thoughts that are subconscious [source: Psychologist World].

Before delving further into his work, let's look at his life. Sigmund Freud was born in Freiberg, Moravia (part of the Austro-Hungarian Empire), in 1856, to a Jewish family. The Freuds soon relocated to Vienna, and in 1873 young Freud began studying medicine at the University of Vienna. He didn't want to become a doctor, though. A science wonk, Freud's interest lay in neurophysiological research. But during that era, it was more practical to work as a physician rather than a researcher. Since Freud was engaged to a woman named Martha Bernays, practicality trumped desire. Freud decided he would specialize in neurology and then enter private practice. (Sigmund and Martha married in 1886 and had six children between 1887 and 1895.)

After graduation, Freud began treating hysteria with his friend Josef Breuer, a distinguished Austrian physician. Hysteria in those days was the name given to patients — usually women — who had various physical symptoms that couldn't be linked to any particular physical cause. Common ailments included paralysis, convulsions and loss of speech. Eventually, Freud opened his own practice in nervous and brain disorders [sources: BBC, McLeod].

The Rest of Freud's Life 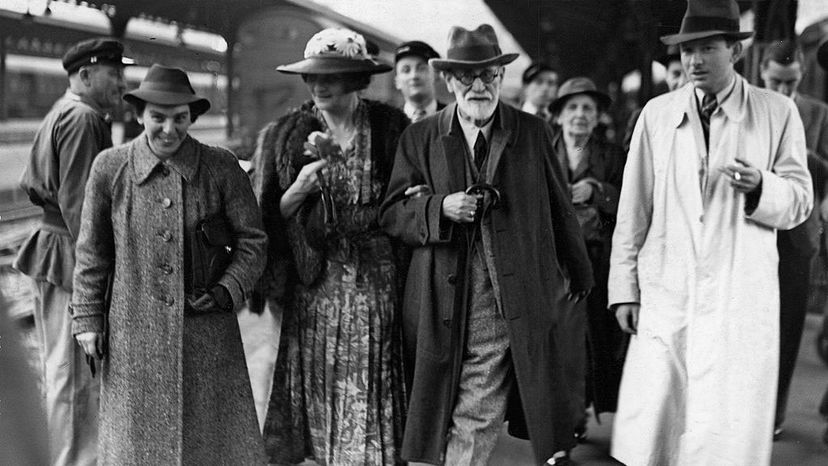 Around 1900, Freud published "The Interpretation of Dreams." Considered his greatest book, it delves into why we dream and what our dreams mean within our psychological lives. The book marked the beginning of the public's awareness of the unconscious mind. Although Freud did not come up with concept of the unconscious mind, he determined it could be accessed via talk therapy, rather than only through hypnosis. This became the basis of psychoanalysis, which we'll explore on the next page.

In 1902, he was appointed a professor of neuropathy at the University of Vienna, a post he held for more than 35 years. He gave lectures on his theories and started to gain a group of followers, founding the International Psychoanalytic Association in 1910, along with Swiss psychiatrist and psychoanalyst Carl Jung. (Jung later broke with Freud after disagreeing with some of his views). In 1923, Freud published "The Ego and the Id," his study of the human psyche, which claimed that most (if not all) psychological conditions stemmed from conflict between the id, the ego and the superego.

When the Nazis began their rise to power, one of their earliest acts was to publicly burn books by Jewish authors, including Freud. The Nazis also disliked psychoanalysis.

In 1938, Germany annexed Austria, and the Gestapo briefly arrested the Freuds' daughter, Anna. That same year, Princess Marie Bonaparte — one of Freud's patients — paid a large sum of money to the Nazis to secure exit visas for Freud and his family. Finally allowed to leave Austria, they fled to London [source: Latson].

A year later, Freud died of jaw cancer. A heavy cigarette and cigar smoker, he had been diagnosed with cancer in 1923 and had had more than 30 operations to treat it. His physician, Max Schur, gave him three large doses of morphine near the end of his life to ease his pain. Some claim Schur's act was really physician-assisted suicide; Freud slipped into a coma after receiving the morphine and never awoke [sources: BBC, Klein]. 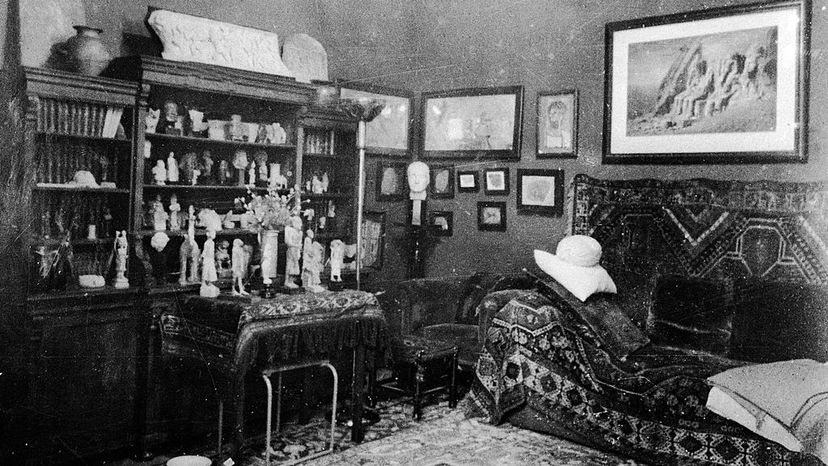 Freud is famed for developing psychoanalysis. This therapy involves treating mental disorders by delving into a person's possible unconscious issues (e.g., repressed fears and conflicts) through techniques like dream interpretation and free association.

He came upon this notion after discussing the case of "Anna O." (a pseudonym for Bertha Pappenheim) with physician-friend Josef Breuer. Anna was Breuer's patient, who was experiencing "hysteria." Breuer had discovered that if he hypnotized Anna, she'd reveal all sorts of information she didn't recall when she was conscious — and her symptoms would lessen afterward. This psychoanalytic treatment became dubbed the talking cure [sources: PBS, Grayling].

After learning about Anna O., Freud tried the talking cure in his own private practice, but found patients would talk pretty freely to him without hypnosis, provided they were in a relaxed position — specifically, lying down on a couch — and if they were encouraged to say whatever came into their heads, a process known as free association. Once a patient talked at length, Freud could analyze what the person said to figure out what past traumas were likely causing the patient's current distress.

After much study and use of the talking cure, Freud decided that mental health issues usually stemmed from repressed thoughts, often of a sexual nature. These could be forbidden sexual urges or due to sexual traumas that were experienced in childhood. By repressing these thoughts or traumas, the patients often ended up suffering from depression, anxiety and a host of other ailments. This is because, while certain thoughts of ours are unacknowledged, they are still in our minds in some form.

By employing the talking cure, or psychoanalysis, a therapist can help a patient dig into the destructive, hurtful issues in their unconscious minds, after which point they can deal with them. To be successful, this therapy usually means meeting with the analyst several times a week for months and maybe even years, depending on the person and their issues.

Psychoanalysis is still in use today, but not widely practiced by therapists (only about 1 in 20,000 Americans use it) [source: Dvorsky]. It can be helpful for those who have longstanding problems they haven't been able to resolve, such as feelings of inferiority that have lingered since childhood. But it's not typically used for, say, someone who has temporary anxiety or depression that stems from a specific, identifiable trauma, such as the loss of a child.

Nevertheless, studies have shown that psychoanalysis, as practiced today, is effective [source: Schedler]. There's less emphasis on dream interpretation and more on helping the patient put words to feelings. The patient often still lies down on a couch during sessions, typically with the therapist nearby, but out of sight, so as not to be a distraction. The patient will then speak of whatever comes to mind in an effort to get the unconscious mind to reveal itself. The analyst tries to interpret what may be going on in a way that is helpful to the patient [source: Kunst].

In addition to creating the psychoanalytic process, Freud came up with quite a few theories about the minds of humans. Many of these theories were rather shocking for the times in which he lived. Here are several of his more memorable ones.

So how do these theories hold up today? We'll find out on the next page. 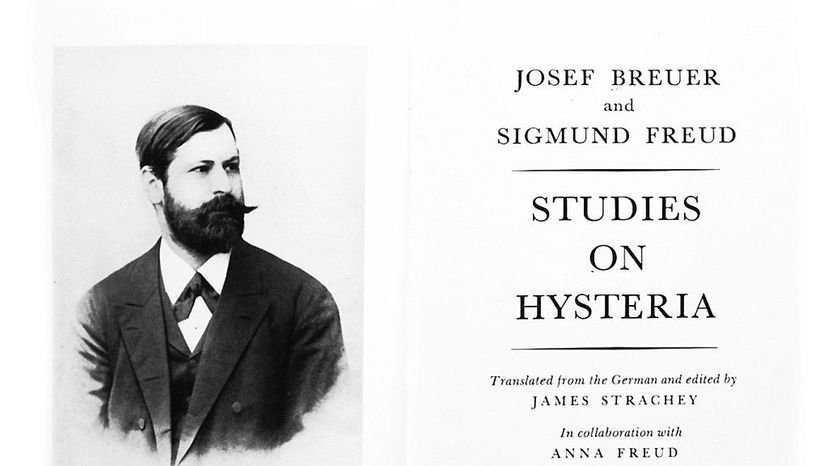 Despite Freud's prominence, today many of his theories are considered rubbish. Harmful, even. In 1996, the journal Psychological Science went so far as to say, "here is literally nothing to be said, scientifically or therapeutically, to the advantage of the entire Freudian system or any of its component dogmas" [source: Dvorsky].

Most concerning is that many of Freud's theories — even the well-known Oedipus Complex — are just that: theories. There is no hard science or clinical trials to back them up. Most of his theories came from observing a handful of people, usually just himself and his patients, who were mostly middle-aged Viennese women, and then generalizing to the world. Some theories were derived from observing just one patient. And despite his numerous theories about kids, he only studied one child over his entire career ("Little Hans") [source: McLeod].

Then there's the sex. Freud's theories often centered around the sexual origins of a patient's problem, which caused a lot of issues for him. During his lifetime, the majority of his peers thought he was too obsessed with the subject. In fact, his close colleague, Josef Breuer, eventually ended their partnership over this. Breuer felt that Freud put too much emphasis on a sexual explanation for various neuroses, and he was frustrated because Freud absolutely refused to investigate other reasons for his patients' illnesses [source: Biography].

Additionally, we know a lot more about brain chemistry than we did 60 years ago. So, while in the 1950s, psychoanalysis might have been the main or only way to treat depression, there are many medications that can be given today to help with this condition.

The Legacy of Sigmund Freud

Freud popularized the idea of the unconscious mind, something that's not disputed today. It may not work the way he said — there isn't any evidence for an id, ego and superego — but our brains process a lot of things without our realizing it. He was right about the existence of suppressed memories, too. We now know that memories are rewritten each time they are recalled. And all of us have used defense mechanisms like denial and displacement at one time or another.

Freud developed the idea of patients openly talking about their feelings and past experiences. And while he went overboard on the sex theme, he gets kudos for bringing up many sexually themed topics at a time when people simply didn't talk about those things. Similarly, we can't overlook his Oedipus Complex. No, it's not accurate, but a lot of us seek out counseling because of issues with our parents, so he was on to something there [source: Dvorsky].

Today neuroscience — the study of the brain and nervous system — is the dominant field in brain science, not psychoanalysis. Neuroscience focuses on the mechanics of the brain — how brains remember or how nerve cells communicate with chemical impulses. But, a newer intellectual movement is gaining traction: neuropsychoanalysis.

Neuropsychoanalysis attempts to link measurable brain activity with a psychoanalytic model of the mind. That is, it links subjective reports humans give with objective measurements. Those involved in this growing movement say neuropsychoanalysis could be used to further certain mental disorders.

Take anorexia, for one. A neurobiologist looking at the brain's neural circuits linking inhibitory and reward systems can't determine how someone with anorexia can overlook her body's pleasure and pain sensations. But by incorporating some psychoanalysis, a possible reason appears: There's an interconnection with physical sensations, emotions and anxiety, which can be studied through brain imaging.

"Psychoanalytic thought is fundamentally humanistic. It honors the unique experience of individual human beings — something often overlooked by the current medical approach to the mind," wrote Kat McGowan in an April 2016 article in Discover magazine. Indeed, not every person with depression is helped by medication. Most people find a combination of medication and counseling (psychotherapy) as well as developing healthy habits like exercising to be the key to taking care of this condition [source: WebMD].

In the same way, marrying psychoanalysis with cutting-edge research into brain activity might be very helpful for treating some people with mental illness. As someone who started out studying neuroscience, Freud would likely approve.

Special Offer on Antivirus Software From HowStuffWorks and TotalAV Security