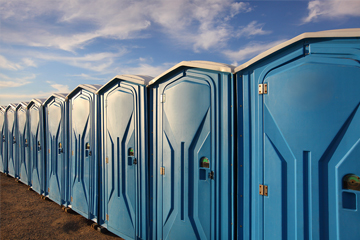 You could inhale droplets of poop if someone farted near your nose.
mikdam/ThinkStock

You're halfway through a morning run when your pace slows, then stops. Stretching out before you lays a corridor of wildflowers, all in full bloom. Overnight, this space so recently steeped in hues of green and brown had transformed into a symphony of color. You expect to be greeted with a pleasant smell, but another unmistakable scent surrounds you. Yesterday, the park was home to a marathon and the rows of portable potties are emitting a dreadful smell.

As the air moves past the nasal turbinate, it reaches the olfactory epithelium, a postage stamp-size region on the roof of the nasal cavity that contains millions of olfactory receptor neurons. These receptors are stimulated by odor molecules, and signal the olfactory bulb situated underneath the front of the brain via the olfactory nerve. Your brain uses this information to interpret odors. In all, humans can identify about 10,000 different scents. Even so, each individual will interpret an odor differently — even when smelling the same thing at the same time [source: Binns].

But what if your nose detects the scent of a something less-than-pleasant, such as poop? Are you actually inhaling poop molecules when you smell poop? Smells register in our noses when microscopic molecules are emitted by the things around us, which includes everything from brewed coffee and fresh-cut flowers to, yes, a public toilet recently vacated by someone with digestive issues [source: National Institute on Deafness].

Of the gases that comprise a fart — nitrogen, oxygen, methane, hydrogen and carbon dioxide — volatile methyl sulfides have been identified as responsible for the odor, and to a lesser degree, hydrogen sulfide gas and methanethiol. All are byproducts of bacteria in the digestive tract and are recognized by the nose as volatile organic compound [source: Cormier].

There are extenuating circumstances, though, that may lead to inhaling more than just gaseous compounds. A nurse who wondered whether her farts in the operating room were contaminating the environment prompted a microbiologist to study the issue. He asked a colleague to direct a fart toward two petri dishes 5 centimeters (nearly 2 inches) away — once with his pants on and once with his pants off. Overnight, the petri dishes that had been the target of the unclothed fart grew bacteria. A closer examination revealed the bacteria were typically found only in the intestines and on the skin. Turns out, if someone farts naked near your nose, you could actually inhale bacteria contained in airborne, bacteria-laden droplets of poop [source: British Medical Journal].

How Anosmia, or 'Smell Blindness,' Can Help Pinpoint COVID-19
Understanding Sinus Congestion
How fast does a fart travel?