Q&A with a NICU Nurse 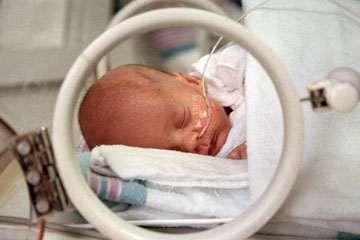 According to the March of Dimes, every year about 10 to 15 percent of American babies are treated in the NICU. See more pregnancy pictures.
March of Dimes Foundation. All Rights Reserved.

Babies who are born with special circumstances, such as illness, infection, respiratory problems, problems during delivery, birth defects or those who arrive too early are often cared for by a special team of health care professionals in a special unit of the hospital -- the neonatal intensive care unit, or NICU.

According to the March of Dimes, every year about 10 to 15 percent of American babies are treated in the NICU. Vicky Leland, a registered nurse and the regional director of NICU Family Support, West Region, for the March of Dimes, answers our questions and shares experiences as a 20-year veteran of the NICU.

First, we asked Vicky to explain what the NICU is.

"A general, good definition is a place in the hospital for babies who require more than routine care. That could be a course of antibiotics or extremely high-level intensive care. There is a real variety in the types of babies in the NICU. There are one-pound babies hooked to a lot of machinery as well as babies who look healthy, chubby and fat, and are there for special feeding or IV [intravenous] meds. There are also babies who need surgical intervention."

Keep reading to see what, exactly, brings a baby to the NICU.

Welcome to the NICU 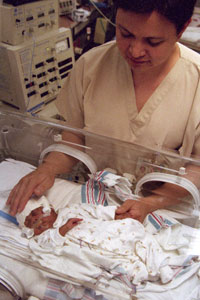 Premature birth, jaundice or respiratory issues could land a baby in the NICU.
March of Dimes Foundation. All Rights Reserved.

What are some of the common diagnoses among newborns in the NICU, and is there an average length of stay?

"Jaundice, respiratory issues, feeding problems, these are all very common.

Different hospitals have different protocols depending on the condition and how big or little the babies are. In regard to length of stay, there isn't an average. It mostly depends on why the baby is in the NICU. An infection that needs to be treated with antibiotics could mean the baby is in the unit for three to seven days. Other babies, especially the very premature babies, could stay anywhere from three months to a year -- it depends on what unfolds for them as they progress. A baby in the NICU at a freestanding children's hospital will usually stay longer because these babies are usually surgically in need of help.

In my career, in 20 years, I saw one baby spend eleven and a half months in the unit. It's a really difficult scenario for a young family. If you're pregnant and it's going along fine, there isn't a lot of emotional preparedness for complications. If something is caught late in pregnancy or at delivery, you haven't had a whole lot of time for that to be part of your life. It disorients and discombobulates young families."

To see what support is available in the NICU, keep reading.

Support for Babies and Their Families

The March of Dimes describes the NICU as a roller coaster ride. What kind of support is available for parents of infants in the NICU?

"To take care of a baby -- the issues going on with that baby and that family -- in the NICU, it takes a multidisciplinary approach. It takes a whole army of health care professionals in addition to doctors and nurses. Respiratory therapists are invaluable in the NICU. These are the professionals who handle a whole realm of care under the direction of the docs, including setting up the ventilators and oxygen. They're invaluable and a huge presence.

Lactation consultants help with breastfeeding, special diet and special formulas. Dieticians specialize in the infant's nutritional needs. Social workers counsel families. Hospital chaplains are incredibly helpful to families in crises, and are either on staff or sometimes, neighboring churches send volunteer chaplains and ministers to visit families in the hospitals.

Occupational therapists, physical and feeding therapists, are also part of the group of people who rally around babies in the NICU. These babies can't live a typical baby life. They need to learn how to feed and move their bodies in a different way than babies who go home in a few days."

Wondering if there's support beyond what the baby gets in the NICU? There is -- Vicky explains on the following page.

The Bond Between Family and Nurse

Do you ever see the babies you've treated as they grow up?

"I love that. A lot of the babies I took care of originally are now in college, girl scouts, boy scouts, doing the things that all kids should be doing. You remember them when they could fit in the palm of your hand, and I think [that's] typical among NICU nurses. There aren't relationships with all families but there are some with whom you develop bonds. You become a very significant part of their families for a time. You celebrate birthdays and other milestone events. I can't tell you how many kindergarten graduations I've gone to, and cried alongside moms. It touches all of us to our core. Staying in touch is part and parcel to being a NICU professional." 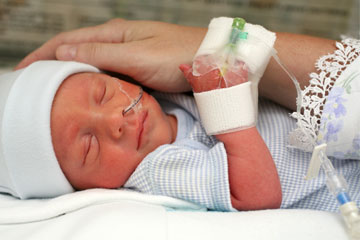 Families with babies, like this one, in the NICU need support, too.
March of Dimes Foundation. All Rights Reserved.

In addition to the NICU health professionals and support offerings for infants in the NICU, there are -- or should be -- support groups and services in place for families. Vicky shared with us her experience running support groups and how she started TLC, Together Let's Cope.

"One of the things I found along the way is that the babies aren't the only ones in the family who need care. We need to look up from the bed and care for mothers, fathers, grandparents and siblings. If the families aren't tended to along the way, it won't work.

TLC -- Together Let's Cope -- is a support system that I ran for about 14 or 15 years. Every week, I'd get families together -- we'd have talks or dinners, anything that brought families together and let them talk and support each other, let them know someone did care about how they were feeling.

I also started taking photos of families in the NICU -- I'd develop the film at home at night -- and families would light up. Between the support groups and the photography I did, it tended to deepen the relationships I had with the families. Graduated families would come back and have dinner with the TLC families. Reunions, volunteering activities and TLC meetings kept me constantly in touch with these families.

Is it sad? Yes, there are many sad days in the NICU but there are also so many times when it's so joyous and miracles happen. It's an incredible world with so many unsung heroes."

On the next page, find out what brought Vicky to the world of NICU nursing.

High Drama in a Quiet Room 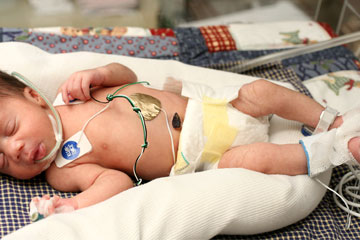 The setting of the NICU can be described as high drama in a quiet room.
March of Dimes Foundation. All Rights Reserved.

How did you decide to specialize in the NICU, and what does it take to become a NICU nurse?

"I'm so fortunate for 20 years to have worked in this career. Most people in the NICU see it as a calling, a passion. It's something they feel they have to do to better the world -- it's not punching a clock.

I went into nursing because I wanted a life profession that helps people. I hadn't found my area at first, and I worked in oncology and pediatrics. I was looking and searching. And then in my personal life, I had a premature baby unexpectedly -- I was 23 years old and healthy, and there had been no indication anything would go wrong. My daughter came two months early, born in a helicopter over Denver while trying to get to a NICU. At that time, NICUs were unusual and even though I was a nurse, I'd never set foot in one.

It changed my life.

While I sat in that NICU, I watched other families. I watched families whose babies were whisked off to surgery, families whose babies died. I felt relieved it wasn't happening to me but guilty because I didn't want it to happen to anybody. It was a good outcome for my family, but I watched so many other families have those bad consequences. I turned to my husband and said, I never want to set foot in a NICU ever again. The life and death in there was incredibly intense. I didn't think I had what it took to work with that staff -- I had such an appreciation.

A couple years later, I was searching for work and, considering the hours I was looking for because my daughter was still frail, I searched high and low. Guess what the only thing I found was -- an internship opening to become a NICU nurse. With my husband and my mentor's encouragement, I reluctantly signed on the dotted line and started the internship, scared to death during that first year. When you're totally responsible for a one-pound baby's survival -- what a daunting responsibility. Mistakes that you might make in other areas of nursing, those mistakes in the NICU are life threatening. It's such precise work. The first year was a very stressful time. I had fantastic nurse mentors, and by that second year, I developed my confidence and realized I could live out my life goals in the NICU.

I can't say it's been an easy career -- I call it high drama in a quiet room. It's intense. It's a very emotional job with high stakes of what the outcomes will be, life-altering outcomes. You work very hard."

Why do lullabies work?
These Countries Have the Most Crybabies — Literally
More Babies Are Sleeping in Boxes — and That's a Good Thing