Can you get pregnant any time in your monthly cycle? 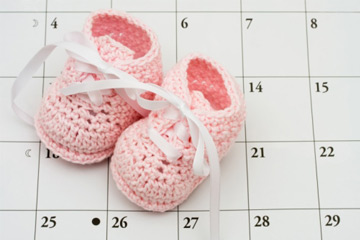 It may seem as though getting pregnant doesn't take much skill or precision. Sperm meets egg, and a baby is conceived. Look at the numbers: There are more than 4 million babies born in the U.S. annually [source: Centers for Disease Control and Prevention]. The odds are good -- about 85 percent of couples who are trying to conceive do so within a year [source: Mayo Clinic]. But when you're a hopeful parent-to-be, every month of trying can feel like forever. To understand when you can get pregnant each month, you'll need to understand the basics of a woman's monthly cycle.

The menstrual cycle is basically broken into three phases: First, the body prepares to ovulate; next, ovulation occurs; and, if that month's egg hasn't been fertilized, menstruation (the shedding of the unfertilized egg and uterine wall) begins. Having sex timed with the release of an egg gives you the best odds for conception.

While you just need one sperm and one egg to connect to become pregnant, it may not be as easy as you think. In fact, you can do everything right -- no health or age concerns and perfect timing of sex just before you ovulate -- and you still only have about a 20 percent chance of conceiving in any given month [source: Kelly]. What's going on? Let's take a closer look at ovulation.

On average, a woman's monthly cycle lasts from 28 to 32 days (to be precise, you'd be smart to track your own cycle), and ovulation happens once during each cycle, roughly two weeks (12 to 16 days) before you expect your period. And this may surprise you: While an unfertilized egg only remains viable for fertilization for just about a day or so, sperm are able to live for up to three to five days in a woman's body. That translates to a woman's fertile time of her cycle being a few days leading up to when she ovulates, plus the day of ovulation.

If you don't have regular cycles or have recently been on hormonal birth control, you may have trouble knowing when you ovulate. The day you ovulate during your monthly cycle is unique to each woman, and it can vary from month to month, even when everything is normal. Whether your cycles are of average length, too short, too long, or break-through bleeding is confused with a monthly period, it's ultimately only possible to get pregnant when sperm are ready, willing, able and available during the ovulation window … whenever yours occurs.

What Happens When Pregnant Women Smoke?
Do thyroid problems make it harder to get pregnant?
Progesterone Cream and Fertility