How to Use Ovulation Tests 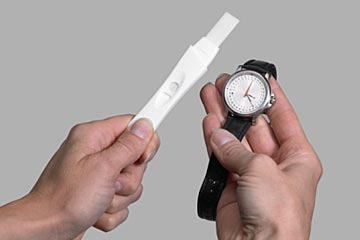 For women, finding the most fertile time of the month can be a challenge. A woman's ovary releases one egg per menstrual cycle during a process called ovulation. After it's released, an egg will remain in a woman's fallopian tube for several hours to be fertilized.

This is why couples trying to get pregnant may consider using an ovulation test to determine when a woman is the most likely to release an egg to be fertilized by sperm. If used correctly, ovulation tests can be more than 90 percent effective in signaling when a woman is ovulating [source: FDA]. But while the test will help if you're trying to conceive, they won't help prevent pregnancy. In other words, just because a test does not indicate a woman is ovulating, that doesn't mean she should practice unsafe sex or skip contraceptives during intercourse.

Ovulation occurs about midway through an average menstrual cycle, which usually spans 28 days in length. During this time, a woman's brain releases specific hormones that stimulate her ovarian follicle to release an egg. One chemical called luteinizing hormone (LH) acts as the primary hormone to produce this change.

Most ovulation tests measure LH in a woman's urine, and resemble basic sticklike pregnancy urine tests. Since LH "surges," or suddenly increases, in a woman's body one to two days before an egg is released, these tests give couples a time frame to have intercourse and increase the chance of conceiving a baby. Much like traditional pregnancy tests, ovulation tests produce results within five minutes.

In addition to urine ovulation tests, there are a handful of other ways to gauge whether a woman's at her most fertile. Doctors may use blood tests -- though they are less common -- to assess whether a woman is ovulating.

But because blood tests are still limited to the discretion of health specialists and are not performed at home or without a trained professional, for most women, urine tests are the way to go.

When is the Best Time to Test for Ovulation?

To increase the effectiveness of ovulation tests, it's best to begin testing around day 11 of your menstrual cycle, or roughly 11 days after starting your period. Some women use online ovulation calculators to keep close track of their menstrual cycles [source: WomensHealth.gov].

Why test a few days before you expect to ovulate?

Since eggs typically survive for 24 hours or so after they're released, couples should prepare in advance for ovulation rather than miss this window of opportunity. Since a man's sperm can survive for up to 72 hours inside a woman -- almost 48 hours longer than an egg, having intercourse in the days before a woman expects to ovulate can bolster a couple's chances of conceiving.

It's also important to keep in mind that each test is different. Some look like popsicle sticks with simple symbols while others present results in a digital window. Thoroughly read the test's instructions before beginning.

In addition, make sure to understand the length of time you should expose the test to urine and how long you should wait before interpreting the results. It also helps to conduct tests at the same time of day for consistency and avoid diluting your urine by consuming large amounts of water.

Most ovulation tests include at least seven tests. Though prices vary, the average test costs between $10 and $20. Companies sell digital ovulation tests, which tend to be more expensive. Either way, most tests get the job done.

If you're uncomfortable urinating directly on a test, consider urinating into a single-use disposable cup (sold separately) and dipping the test in.

For more information on ovulation tests, head over to the next page.

Learn more about ovulation in "The Ultimate Getting Pregnant Fast Guide: Everything You Need to Know to Optimize Ovulation and Get Pregnant Faster" by Kristina Duclos. HowStuffWorks picks related titles based on books we think you'll like. Should you choose to buy one, we'll receive a portion of the sale.

Saliva ovulation tests are less common and somewhat controversial. Apparently, a woman's dried saliva is said to form a fernlike pattern when she's ovulating [source: FDA]. In contrast to quantitative tests that measure the amount of LH in the body, saliva tests are qualitative in nature and can easily be misinterpreted. Some people even question the effectiveness of these tests.

How far in advance can I tell when I'm ovulating?
How do high FSH levels affect getting pregnant?
Hormone Imbalances and Infertility

How can a rabbit tell me if I'm pregnant?
Are antibiotics safe to take during pregnancy?
How many women who have abortions are single parents?