Can you really not get pregnant while breast-feeding? 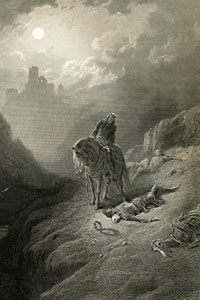 What do King Arthur and breastfeeding have in common? Read on to find out.
©iStockphoto/duncan1890

What if those Greek and Roman myths you read in high school weren't really stories? What if they were actually based on fact? It turns out that some ethnographers believe that the ancient gods and goddesses, people, places and events of religious lore are actually based on real people and things. This belief is called euhemerism, based on the work of Euhemerus, an ancient Greek scholar who was the first to posit the idea. Under the theory of euhemerism, Helen of Troy and King Arthur actually existed. However, their stories have been embellished to an exaggerated degree over the ages; they've come to more resemble fictional characters than real people.

The same theory can be applied to old wives' tales. One can argue that somewhere along the line, people noticed characteristics about the world around us and made note of them by folding them into nuggets of homespun wisdom that have been passed down from generation to generation.

Many of these nuggets concern pregnancy. Observations like a child carried low in the womb is a girl and darkened areolae means that a woman will have a boy are the result of years of predictions. These predictions may be based on original observations. Some of these would've been inevitably proven correct -- after all, there's a 50 percent chance the predictor is right. With enough accurate predictions, an observation might evolve into conventional wisdom.

The advent of the scientific method put a definitive end to many old wives' tales. At the same time, science has also shown that some old wives' tales about pregnancy and child rearing aren't too far off, and may even be correct. Anecdotal evidence, after all, is still evidence.

One of those tales involves the idea that a woman who's breast-feeding can't get pregnant. For the most part, this isn't true: Any woman with a regular menstrual cycle may become pregnant and many women get their first postpartum period while they're still lactating. There are, however, some conditions under which a woman can't become pregnant when she's breast-feeding. As old wives' tales go, this one is among the closest to the truth.

Learn about the physiological processes that led people to conclude that breast-feeding prevents pregnancy -- and why this doesn't necessarily work as a means of birth control -- on the next page. 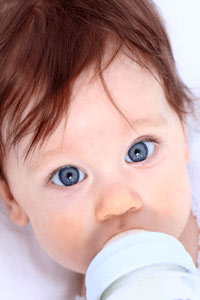 If you're feeding your baby formula as well as breast milk, chances are you can become pregnant.
©iStockphoto/YsaL

Menstruation is the end result of an elegant and intricate chain reaction of chemical signals via hormones that trigger the physical processes that make up the menstrual cycle.

The cycle begins with the hypothalamus region of the brain sending the gonadotropin releasing hormone (GnRH) to the pituitary gland. In turn, the pituitary gland releases follicle stimulating hormones (FSH), which stimulates the production of an egg in the ovarian follicle and also generates the production of estrogen in the ovaries. Estrogen is a hormone responsible for stimulating new cell growth along the uterine lining, or endometrium. Another chemical, leutinizing hormone (LH), triggers the release of the egg (ovulation), which should ultimately attach to the endometrium. Once the egg is released, the follicle produces estrogen and another hormone, progesterone, both of which stimulate new cell growth along the endometrium to ensure that the egg attaches to the uterine wall.

If the egg is fertilized, the follicle continues to pump out progesterone and estrogen to ready the endometrium for the egg's growth into an embryo -- and eventually, into a fetus.

It's here that we learn why breast-feeding can prevent pregnancy. As we discussed, the hypothalamus secretes the gonadotropin releasing hormone that sets off the whole sequence of menstruation. The release of that chemical appears to be repressed by the prolactin hormone, which encourages the production of breast milk. Without the GnRH release, the menstrual cycle won't begin anew in the event of a pregnancy. As long as prolactin levels are high -- during a postpartum period of exclusive breast-feeding, for example -- then GnRH generally won't be released.

So, it was reasonable for old wives to conclude that a woman can't get pregnant while breast-feeding, especially considering that this observation would've been made before the advent of any supplements or alternatives to breast-feeding. Since breastfeeding was the only option for nourishment back then, the blood of nursing mothers would've had high levels of prolactin -- and probably wouldn't have been able to become pregnant during the breast-feeding period.

What may have once been true no longer necessarily holds, however. Due to the widespread availability of baby formula, women tend to breast-feed less frequently. Instead, physicians often recommend that nursing women who want to avoid pregnancy use a barrier method of birth control, like a condom or diaphragm [source: Parenting].

How To Calculate Your Pregnancy Due Date
Can you get pregnant after having gonorrhea?
Does diabetes affect fertility?