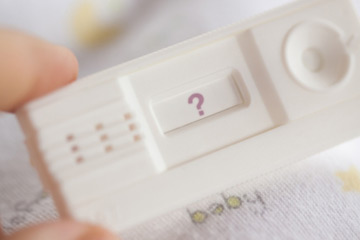 When you're having trouble conceiving, an inexpensive home fertility test can let you know if you should seek a doctor's help or just keep trying a bit longer.
©iStockphoto.com/MarsBars

More than 4 million babies are born in the U.S. every year, and if you're hoping to conceive, sometimes it may seem as if everyone you know is expecting [source: CNN]. Everyone except you. An estimated 2 million married couples in the U.S. are infertile, and an estimated 7.3 million women of reproductive age (ages 15 to 44) have used fertility services [sources: American Pregnancy Association; Centers for Disease Control and Prevention]. If you haven't conceived after a year of trying (or six months if you're 35 or older), and you're considering fertility testing, you should know that some basic tests can now be done at home, similar to at-home pregnancy tests.

Currently, American women are able to test at home for pregnancy, ovulation and fertility. While pregnancy tests look at urine levels of hCG (human chorionic gonadotropin), and ovulation tests measure LH (luteinizing hormone), fertility tests measure the level of FSH (follicle-stimulating hormone). Produced by the pituitary gland, this hormone is responsible for producing a fully developed egg each month.

Just as with any at-home, urine-based test kit, you should be sure to follow the fertility test's instructions closely: FSH must be tested on day 3 of a woman's cycle to get an accurate reading of how much FSH her body must produce to develop a quality egg. Chances of becoming pregnant and having a healthy pregnancy are low without a viable egg.

During each cycle, a woman's body will try to develop a mature, healthy egg. As a woman ages, or due to problems such as autoimmune disorders (especially pituitary gland disorders), genetics, medications, some cancer treatments or environmental factors, her FSH levels begin to rise. Why? Because even though a woman is born with more eggs than she'll need in a lifetime -- roughly 1 to 2 million eggs -- the number of usable eggs, known as her ovarian reserve, begins to diminish as she ages [source: Merck Manuals]. When this happens, her body makes more FSH in an attempt to develop viable eggs. High FSH results on an at-home test indicate there's some level of fertility impairment, but not the cause. For additional testing, seek the advice of your doctor or fertility specialist.

Because infertility affects men just as it affects women, at-home tests are also available for men. In fact, it's estimated that at least 20 to 30 percent of couples who have trouble conceiving do so because of a male fertility problem [source: WebMD]. Let's look at how men are now able to test their fertility at home.

A key factor in male fertility is quality of sperm. Sperm needs to have good mobility (speed) and good motility (movement), and there needs to be a good supply of healthy specimens available (none with two heads, please). Until recently, men suspecting they may have a fertility issue were asked to leave a sample for semen analysis at a fertility center or doctor's office -- and often that sample is collected at the center itself or must be delivered in a short amount of time. Uncomfortable. But now there's an at-home testing option to help relieve the pressure.

Researchers at the University of Virginia in Charlottesville have developed an at-home test kit that can be used to check one part of what's normally included in a semen analysis: a man's sperm count. Wondering why you'd bother with just a sperm count? While this test doesn't check for other sperm issues -- problems with shape, speed and movement -- problems with sperm count are responsible for an estimated 89 percent of sperm-related infertility issues [source: Hutchison]. It's a good place to start.

At-home male fertility testing requires only the test kit and a fresh semen sample. The test strips are designed to detect the amount of an antigen known as SP-10, which is found on the head of sperm cells. Men with results indicating more than 20 million sperm per milliliter are considered to have normal fertility. Men with sperm counts between 2 million and 20 million may have impaired fertility, and those with counts less than 2 million are considered infertile.

For couples who may have been trying to conceive for a few months, but who aren't ready to undergo fertility testing, at-home FSH testing may be beneficial and could potentially help you spot a problem early on. Tests are more than 95 percent accurate and cost less than in-office testing. While these tests aren't a diagnosis, they are a good first step toward understanding your fertility and whether you may benefit from expert advice and planning.

For more information about at-home fertility testing, see the next page.

Are you worried that you might have a fertility issue because it's been a few months and you haven't yet conceived? Don't assume the worst -- in fact, the odds are with you. Eighty-five percent of couples get pregnant within one year of trying to conceive [source: Mann].

Understanding Postpartum Depression
If a Woman Has Two Wombs, Can She Get Pregnant in Both?
Causes of Infertility