Browse the article What Is the Linea Nigra of Pregnancy? 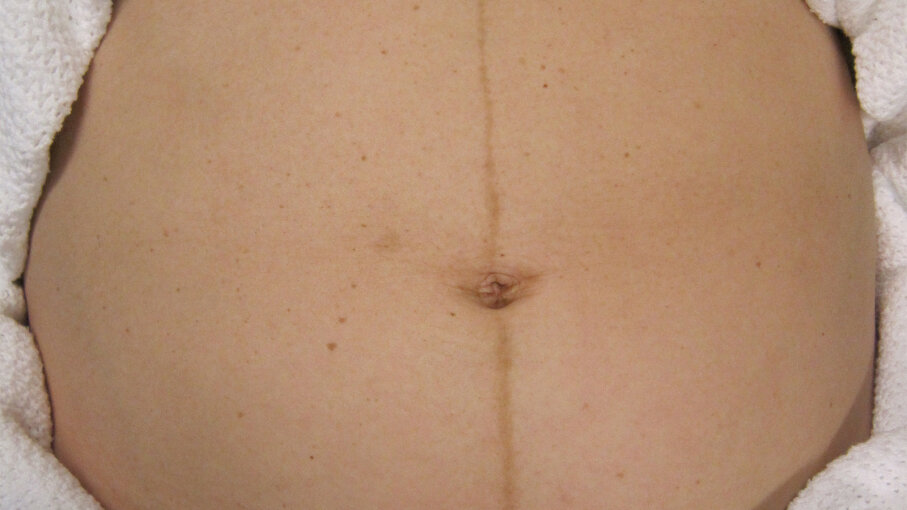 The dark line that runs down a woman's belly during pregnancy is perfectly normal and simply a sign of increased hormone production. Wikimedia Commons (CC By-SA 3.0)

Have you ever noticed a dark line running down the middle of a pregnant woman's belly? It's usually not visible under normal, not-pregnant circumstances, but everybody has one of these lines. It's called the linea nigra — the black line — and it extends from the navel to the public bone. But if we all have one of these marks on our bellies, why does it mainly show up in pregnant women?

Around the fifth month of pregnancy, it starts to appear: a brownish (or sometimes even blueish) line between one-quarter and one-half inches (0.6 to 1.3 cm) wide. It more regularly shows up in women with higher natural skin pigment, but it can also show up in people who aren't pregnant — particularly in adolescents during puberty. On most people, the line — where the connective tissue meets down the midline of the body — is invisible. It's called the linea alba, or the pale line — not as noticeable, but exactly the same.

So, what makes this line dark during pregnancy, and sometimes puberty? The similarity between these two demographic groups is pretty obvious: lots and lots of hormones. A woman will make more estrogen during a single pregnancy than she will during all the rest of her days combined. The deluge of pregnancy hormones can lead to all kinds of skin hyperpigmentation, including darker skin on the face, nipples and genitals. Exactly what causes the darkening of the linea nigra is not precisely known, but it's probably a melanocyte-stimulating hormone produced by the placenta.

And in case you were wondering whether the line ever goes away, it sure does — just give it a couple months after the baby's born.